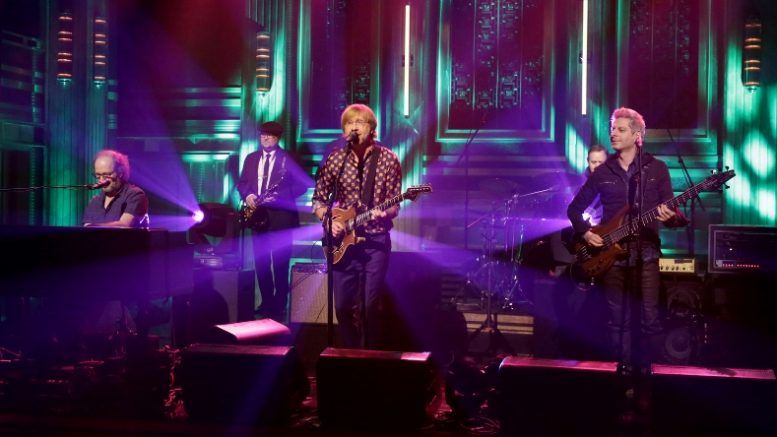 (JTA) — Gary Stein remembers the first time someone played a Phish song for him in high school. It was “Divided Sky,” an intricate 11-minute tune that shows off the group’s diverse jam rock chops.

Stein, who’s now a 30-year-old history doctoral student living in Los Angeles, quickly became infatuated with the band, which takes cues from the Grateful Dead and a host of other genres, from prog rock to bluegrass.

Unfortunately for Stein, that was right around the second time that Phish broke up, in 2004. But the group reunited in 2009, and Stein was more than ready to see them live. He traveled from New York to see three consecutive reunion shows in Hampton, Virginia, and over the proceeding couple of years he estimates he saw them play over 60 times. Since 2009, in total, Stein has been to over 100 Phish concerts.

Stein was brought up Orthodox, and he still keeps a kosher home, observes most Jewish holidays and has a Shabbat dinner on Friday nights. But he describes the live experience of a Phish concert as equally transcendent, if not more so, than any religious experience he’s ever had.

Stein is far from alone.

Phish, which formed at the University of Vermont in 1983, has cultivated one of the most dedicated rock fan bases in the world, thanks in part to their virtuosic live improvisation — like the Grateful Dead, Phish is known for their extensive instrumental jams and never playing the same show twice. There’s a grassroots “Phishhead” subculture that revels in bootleg concert recordings (the band encourages fans to record their shows), show set lists and band merchandise. Many fans regularly follow the band across parts of the country, essentially “touring” with them, seeing several of their shows in a row.

It’s also widely known — at least within the Jewish community — that Jews are very overrepresented among the faithful.

So over the weekend, at the inaugural academic conference on Phish culture, which took place at Oregon State University, there was a panel dedicated to Jews and Phish. The full title — “People of the (Helping Friendly) Book: Jews, Judaism and Phish” — alludes to the Helping Friendly Book, which appears in the story of Gamehendge, the fictional setting of many Phish songs. Gamehendge is inhabited by a race of people called Lizards and doubles as a nice encapsulation of the wacky humor present throughout the band’s catalog.

One of the scholars who probed the connections between Jews and Phish on Sunday was Oren Kroll-Zeldin, an assistant professor of Jewish studies and other subjects at the University of San Francisco. He lays out a series of factors that brought the two worlds together over time. The first tangible cultural nexus was hippieish summer camps that were permeated by Phish and its music through the late 1980s and ’90s. Kroll-Zeldin notes that a large percentage of American Jews have formative experiences at Jewish summer camps, from which Jewish social networks — they are more tightly knit than many realize — disseminate a specific culture.

Then there are the liberal arts colleges and universities in the Northeast where Phish also thrived at that time — and where Jews are also represented in disproportionate numbers.

“I think the key finding of my research is that Phish is one of many vehicles through which Jewish fans connect on a meaningful level with their cultural Jewish identity,” Kroll-Zeldin told the Jewish Telegraphic Agency. “Phish provides an alternative venue to build Jewish community and Phish shows become a site where fans can have meaningful Jewish experiences outside the confines of traditional Jewish life.”

Phish fandom — and for many, the specific experience of attending Phish concerts — filled a spiritual void that began to open up in that younger Jewish generation. That was certainly the case for Aimee Weiss, a 33-year-old who works for a private grantmaking organization in New York City. Like many of her peers, she first heard Phish at Jewish summer camp. She doesn’t know exactly how many Phish shows she has seen, but guesses “under three figures.”

“For a time (pre-my Phish days), more traditional Jewish infrastructure and practices brought me safety, meditation, mental healing, etc. My relationship with Judaism has changed of late,” she said in an email. “In the absence of deeply meaningful and more traditional Jewish spaces, I sought to fill the spiritual vacuum. When the setting and your headspace are just right, a show fulfills what I used to go to shul for.”

Rabbi Josh Ladon, the West Coast education director for the Shalom Hartman Institute of North America, who was part of the conference panel with Kroll-Zeldin, conducted a study of Jewish clergy who say Phish has influenced their sense of Jewish spirituality or community. Among the 340 responses, many pointed to Phish’s live improvisation in addressing the spiritual quality of their concerts. Improvisation takes agency and creativity, Ladon said — concepts that respondents brought back to their Jewish religious lives.

“They’re projecting and saying this improv is really important to my spiritual life because it requires me when I’m listening to be mindful … it requires me to take seriously the possibility of things not working out the way they were intended,” Ladon said. “There is something about when you go to a Phish show, many people know what’s going on, and people [in the survey] write about that feeling of wanting to have their synagogue community to understand what’s going on [during a service].”

Phish has even helped Jews feel and become more Jewish, as documented in articles Ladon came across in his research and his own study. The most well-known example is the reggae rapper Matisyahu, who went through an intense Phish phase before becoming Orthodox, seeing around 50 of their concerts. Ladon said some of his respondents said they became Modern Orthodox rabbis in at least some small part because of Phish’s influence on their spirituality. One even became haredi.

Two members of the band — bassist Mike Gordon and drummer Jon Fishman, whose surname inspired the band name — are Jewish. Gordon attended a Solomon Schechter Jewish day school in Newton, Massachusetts, and his father was a leader in the Boston Jewish community, notably with local groups that supported the Soviet Jewry movement.

In a possible nod to their Jewish fan base, the band is known for playing live versions of “Avinu Malkeinu” and “Yerushalayim Shel Zahav.”

For Ladon, Jewish Phish fandom is an important manifestation and representation of modern Jewish American life — and it’s not the only place that Jewish scholars should be looking to in order to explore contemporary Judaism. He points to the huge Kabbalat Shabbat held at the annual Burning Man festival in Nevada, for example.

“Jews in America are living their lives as part of a broader culture, and so to understand deep notions of Jewish spirituality,” he said, “you have to look at not just sources constructed by Jews who are rabbis and inside the Jewish world, but also see how the spiritual experiences of broader modern American culture can influence it.”