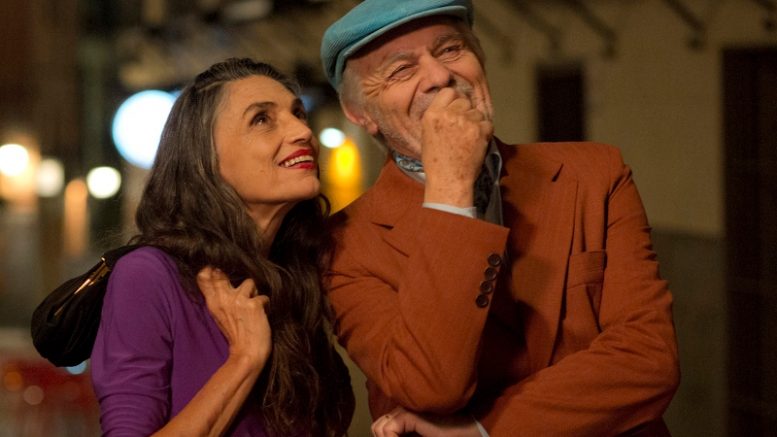 "Last Suit" is one of the highly acclaimed films that will be screened at the Edmonton Jewish Film Festival this month,

Here is a peek at the feature films that will be screened at the upcoming Edmonton Jewish Film Festival, from May 21 – 30, 2019 at the Landmark Cinema 9, City Centre. For ticket information visit jewishedmonton.org

An engaging, humorous and life-affirming story of the relationship between Reuben (60), an aging auto mechanic, and Gadi (35), the exuberant special-needs son he abandoned long ago. When his ex-wife dies, Reuben is suddenly thrust into the position of caring for Gadi. Their relationship is tested by trials and tribulations as they adjust to their new life together. See the trailer.

The gripping story of the discovery of the Cairo Geniza, a vast, treasure trove of manuscripts hidden for centuries in the sacred storeroom of an ancient synagogue in Old Cairo. It is the largest cache of Jewish history ever found. Though discovered over a century ago, the collection is now being digitized and made available in The Cloud, to one and all. See the trailer.

Salam, a production assistant on the set of a popular Arab-language soap opera, strikes up an awkward friendship with Assi, an Israeli officer at the Ramallah checkpoint. Together, Salam and Assi come up with plots for the show that betray their shared desire to normalize Arab-Jewish relations and earn them points with the women they love. See the trailer.

“The Museum” explores the Israeli soul through visiting the galleries, storerooms and visitors to the Israel Museum, Israel’s most important cultural institution. With a sharp, ironic eye, the film goes room to room, meeting many of the colourful characters that take part in a chain of activities which total the museum itself. See the trailer here.

In this poignant, humorous, late-in-life road trip movie, Abraham Bursztein, an 88-year Holocaust survivor leaves his home in Buenos Aires for Poland, to find the friend who saved him from certain death, long ago. Fleeing his family, who want to put him in a nursing home, and after more than seven decades with no news from his friend, Abraham sets off on a wild adventure. See the trailer.

“Leona” is an intimate and moving story of a young Jewish artist from Mexico City who finds herself torn between her family and her forbidden love of a non-Jewish man. The story is both painful and beautiful – there are no easy choices to be made as she struggles with her heart to take the best path. See the trailer here.

In this fascinating film about how a dishonest man can rise to power, Ruth Beckermann documents the process of uncovering former UN Secretary General Kurt Waldheim’s wartime past. The film shows the swift succession of allegations by the World Jewish Congress during his Austrian presidential campaign, the denial by the Austrian political class, and the outbreak of anti-Semitism and patriotism, which finally lead to Waldheim’s election. Created from archive material, the film shows that history is destined to repeat itself, time and time again. See the trailer here.

Visiting their gravely injured son in a Jerusalem hospital in the aftermath of a terrorist attack, Orthodox couple Bina and Meir form a surprising bond with a young woman, who is at the hospital to attend to her dying father.  As the surprising truth about her identity unfolds, they struggle to accept the circumstances that brought them together. Questions about the nature of faith, acceptance, and understanding loom large. See the trailer here.

Conductor Zubin Mehta was born in India and has had a dazzling international career.  Since he first joined the Israeli Philharmonic Orchestra in 1969, he has developed strong ties with the state and become the face of its cultural excellence. Produced on the eve of Mehta’s 80th birthday, this film is a timely celebration of the legendary maestro’s life and work. See the trailer.