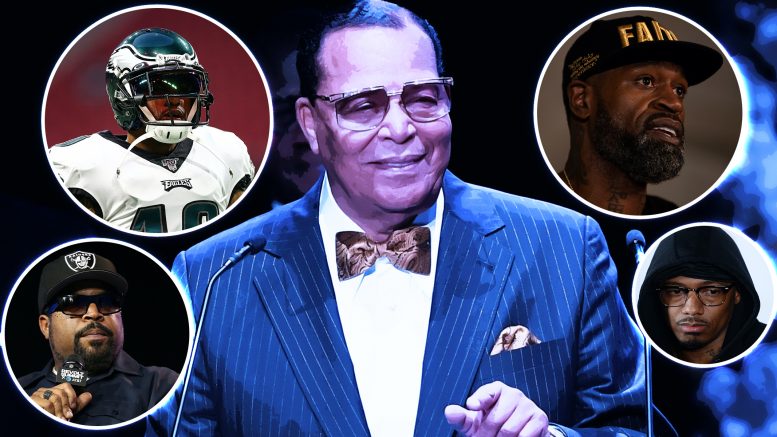 “This man powerful I hope everyone got a chance to watch this!! Don’t be blinded. Know what’s going on!!” Jackson wrote on his Instagram account on July 4, after Farrakhan gave a three-hour speech on YouTube.

Jackson is among several Black celebrities who has defended or praised Farrakhan and echoed his anti-Semitic rhetoric over the past several weeks. That includes former NBA player turned talking head Stephen Jackson, TV star Nick Cannon and rapper and actor Ice Cube. All but Ice Cube apologized.

Chelsea Handler, who is white and Jewish, also took heat for boosting an old video of Farrakhan talking about racial justice. She later deleted the video and apologized.

Farrakhan, 87, is known for his anti-Semitic and homophobic rhetoric. He has praised Hitler, accused Jews of controlling the U.S. government and railed against what he calls the “Synagogue of Satan.”

But he’s also known for empowering Black activism, organizing social service programs in low-income Black neighborhoods and advocating for Black self-reliance decades after he organized the 1995 Million Man March, a rally that brought hundreds of thousands of Black people to Washington, D.C.

“[D]espite the Nation’s many flaws, it is present for black people in America’s most deprived and segregated enclaves when the state itself is not present, to say nothing of those who demand its condemnation,” wrote the Black and Jewish writer Adam Serwer of The Atlantic in 2018, explaining why Black leaders are often reluctant to condemn Farrakhan. “Then there is the sense that while Farrakhan’s views are vile, he lacks the power or authority to enforce them.”

Black journalists and activists say Farrakhan’s enduring appeal comes from the social service work that he and his Nation of Islam continue to do in low-income Black communities. It may also come from the attention that white Americans give to Farrakhan, as well as the fact that enduring segregation and white flight from cities mean that many Black people have little exposure to Jewish communities, as well as a lack of education around anti-Semitism and its dangers.

Black commentators have pointed out for years that it’s difficult to be involved in social activism in Black communities without encountering the Nation of Islam. The group has been particularly active in helping formerly incarcerated people, and also has worked on anti-poverty campaigns and making neighborhoods safer.

If you’re a Black community organizer working on those issues, or a Black celebrity advocating for them, says hate movement researcher Eric Ward, odds are you’ll find yourself alongside people affiliated with Farrakhan, especially in neighborhoods with a dearth of other civil society organizations.

“An organization like the Nation of Islam is prosperous because it has no competition,” said Ward, executive director of the Western States Center.

“If you’re a person who’s politically active and socially conscious, it is not uncommon that you will find yourself sharing space with the Nation of Islam,” he said. “They have a track record on work around former felons that, without putting value on it, is highly respected. It’s pretty unlikely, in any major city in America that has a substantial Black population, that you’re doing work around the formerly incarcerated and are not at least in a loose coalition with the Nation of Islam.”

Farrakhan also gets so much attention, said Amy Alexander, who edited an anthology called “The Farrakhan Factor” in 1999, in part because white leaders give him so much attention. He knows his outrageous statements will raise his profile, so he keeps making them.

“Minister Farrakhan has voiced anti-Semitic rhetoric for nearly a half-century. It is odious and unacceptable — but should by now be completely expected,” she told the site Journal-isms in 2018. “Farrakhan’s anti-Semitic ramblings only succeed in riling up some folks (including journalists) who vastly overestimate his impact.” 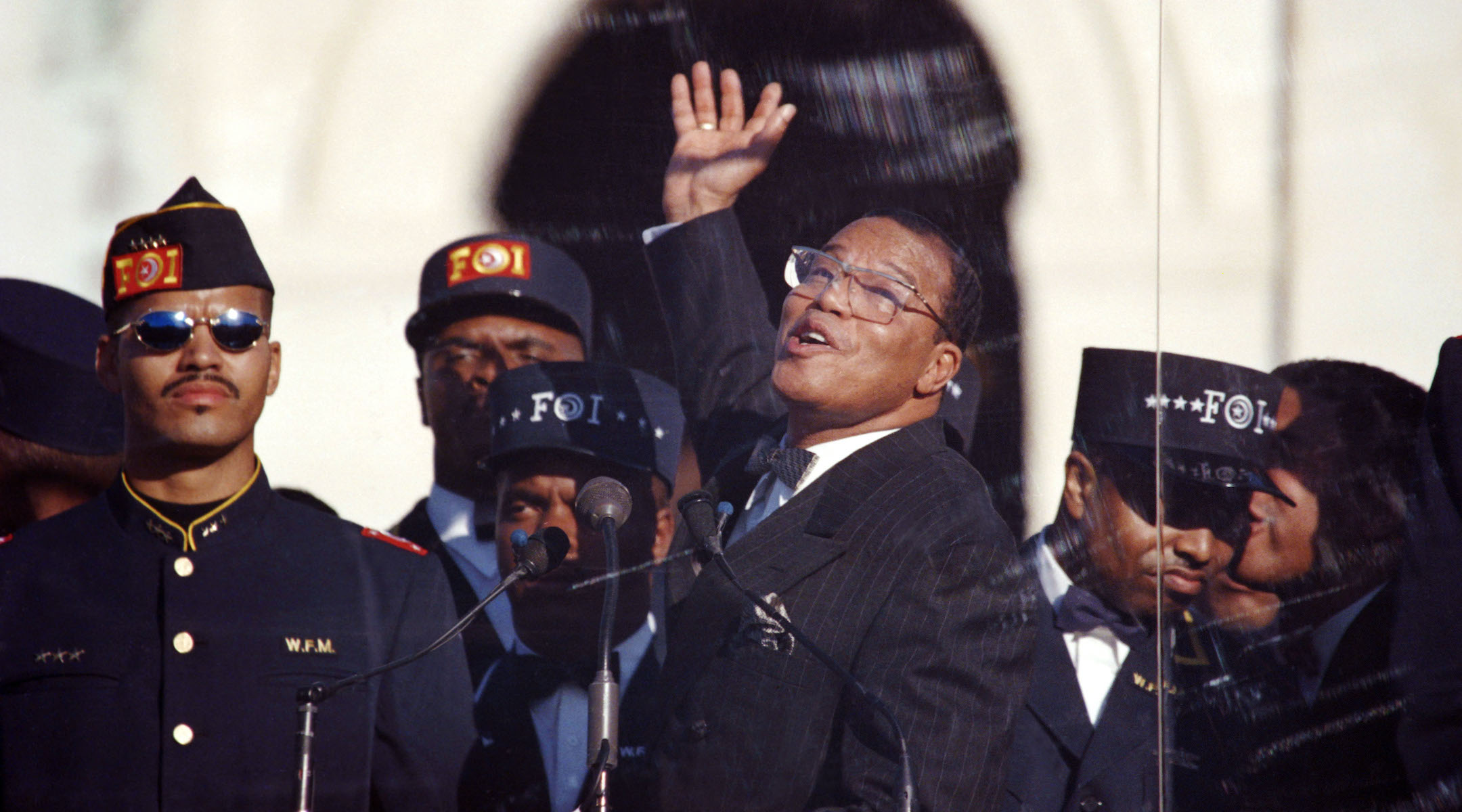 Louis Farrakhan speaks in front of the Capitol building at the Million Man March in Washington, D.C., Oct. 16, 1995. (Richard Ellis/AFP via Getty Images)

That attention ends up inflating his image beyond the actual impact he has in Black communities, says Ward.

“I think folks would be surprised at how little the Nation of Islam and Louis Farrakhan are on the mind of most Black Americans,” he said. “It is about as much on the mind of the Black community as the Klan is on the average mind of a person in white America.”

This dynamic has played out many times before the recent controversy involving DeSean Jackson and the others.

In 2018, then-Rep. Keith Ellison of Minnesota was scrutinized over past ties to Farrakhan that he had since cut off. Last year, Sen. Cory Booker of New Jersey had to forcefully disavow any ties with Farrakhan on the presidential campaign trail. Tamika Mallory, a co-founder and leader of the Women’s March, declined to withdraw her praise of Farrakhan in 2018, leading to a backlash against her movement. And in 1994, Arsenio Hall ended his talk show in part because of widespread criticism he faced for hosting a long — and, critics said, softball — interview with Farrakhan.

Several Black commentators have called out the latest round of Farrakhan praise. In response to DeSean Jackson, NFL player Zach Banner posted an emotional video defending the Jewish community and detailing how the Pittsburgh synagogue shooting affected him — especially as a member of the Pittsburgh Steelers.

The prominent ESPN commentators Stephen A. Smith and Michael Wilbon both called out Stephen Jackson.

“He has no credibility now,” Wilbon said on his ESPN show “Pardon the Interruption” about Jackson, who was become a leading Black Lives Matter activist. NBA Hall of Famers Kareem Abdul-Jabbar and Charles Barkley have weighed in on the subject, too.

“I’m so disappointed in these men,” Barkley said in a video posted Monday. “I don’t understand how you beat hatred with more hatred.”

Jemele Hill, a columnist and former ESPN personality, wrote that the Farrakhan posts reflect a broader problem in the Black community, which she witnessed growing up.

“Stereotypical and hurtful tropes about Jews are widely accepted in the African American community,” she wrote in The Atlantic. “As a kid, I heard elders in my family say in passing that Jewish people were consumed with making money and that they ‘owned everything.’”

She added, “This also doesn’t mean that my family — or other African Americans — are more or less anti-Semitic than others in America, but experiencing the pain of discrimination and stereotyping didn’t prevent them from spreading harmful stereotypes about another group.”

Leo Ferguson, a Black Jewish progressive activist, sees a parallel between the way Farrakhan demonizes Jews and the way some white Jews will point to Farrakhan to emphasize anti-Semitism in the Black community. In both cases, he believes they are distractions from the real issue.

“The reason that Jews loom large in the anti-Semitic ideology that Louis Farrakhan espouses is because they represent a kind of bogeyman, this conspiracy theory that provides a simple and easy explanation for oppression,” said Ferguson, an organizer with Jews for Racial and Economic Justice.

By the same token, he said, for white Jews, “The preoccupation with Louis Farrakhan, Black people and other people of color who are enacting anti-Semitism is a distraction from the people who have benefited from anti-Semitism, who have overwhelmingly been white Christian.”

Ward points to white supremacy as the reason why Black celebrities are quoting Farrakhan’s anti-Semitic rhetoric. White supremacists have long portrayed Jews as a nefarious force in society, and Ward says that’s an idea that has seeped into Black leaders’ rhetoric when they are looking for someone to blame.

“Part of the purpose of that ideology is to position the Jewish community as a protective barrier between the haves and the have-nots,” he said. “We as Black folks somehow think that propagating anti-Semitism means we are punching up against power, but all we are doing is punching down on a community that is vulnerable in other ways because of anti-Semitism.”

Ward said that Black people may also repeat anti-Semitic sentiments because underfunded schools in low-income neighborhoods don’t have the resources for a robust curriculum on the Holocaust or against hate.

“If you went to bad schools in high school and elementary, it means you’ve been given no building blocks in which to evaluate the information you’re being given and exposed to,” he said. “Why are folks so susceptible to anti-Semitism? Because who gets to benefit from Holocaust education? It is not likely underfunded public schools for the most part.”

As a Black Jew, Ferguson says that addressing Farrakhan quickly gets exhausting because it means facing misconceptions from two different communities and fighting prejudices from both.

“Whenever I see something else happening with Farrakhan, there’s this full-body cringe,” he said. “You know that white Jews, including white Jews who you are in community with and care about, are going to get caught up in a fixation on anti-Semitism from people of color because of racism, because of white supremacy.

“And you also know there are people in your own community who believe all types of lies and misinformation about Jews, and that’s incredibly isolating for Jews of color and for me as a Black Jew.”