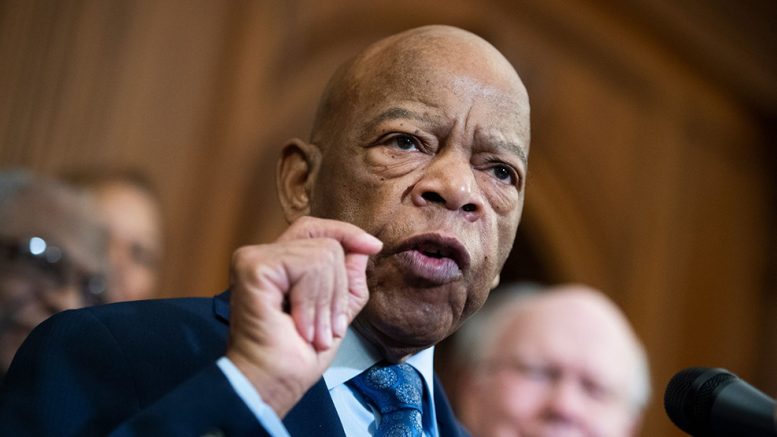 ST. MICHAELS, Maryland (JTA) — The day is one of my most vivid and treasured memories. I was associate director of the Religious Action Center of Reform Judaism, and we were in the middle of our flagship public policy conference. One of my responsibilities was to assign Reform Movement leaders to introduce each of our speakers. The power went right to my head, and I began by assigning myself to introduce John Lewis, the congressman from Georgia who was an icon of the civil rights movement.

Somehow the many higher-ups who reviewed the list either did not see what I had done or were focused elsewhere. And so I had the opportunity, the privilege, the honor, to stand on the stage that day and tell Rep. Lewis, face to face, exactly why he was my hero.

That feeling has only deepened in the decades since. Now, with a little more perspective, and in honor of one of the most remarkable, most American, lives ever lived, I want to suggest four key lessons (among hundreds) that we can all learn from John Lewis’ life and work.

First, Lewis was never patient. (In fact, in his draft remarks for the 1963 March on Washington, he wrote, “‘Patience’ is a dirty and nasty word.”) He worked closely with more established leaders, including Dr. Martin Luther King, but he demanded — and earned — a seat at the table; he knew that it was critical that the movement always hear the voice of younger leaders. He was 21 when he became one of the original Freedom Riders, 23 when he was the youngest speaker at the March on Washington, and 25 when he led the march over the Edmund Pettus Bridge on Bloody Sunday. I think we can all ask ourselves what our institutions would be like if we had 23-year-olds in key decision-making roles. How much talent are we missing out on while we wait for it to develop?

Second, Lewis did not quit. As I look at Lewis’ life I wonder how often others (including myself) would have walked away from the battle. Would I have continued after being beaten the way Lewis was? Would have I walked away after the 1964 Civil Rights Act, and thought I had earned some rest? Would I have given up on public service after losing my first bid for Congress? Would I have retired when political opponents began to dismantle what I had sacrificed so much for? Would the election of the first African-American president have been a signal that the nation had turned a corner? John Lewis never gave up, never stopped working to make this country the place he knew it could be. His voice was powerful to the end.

Third, Lewis used his hard-earned moral authority widely. Lewis understood that the struggle for equality needed to include equality for all. He was a strong supporter of LGBT rights, for example, and was always a great friend and ally to the Jewish community. Lewis believed that peace and safety were key elements of Dr. King’s “Beloved Community,” which led him to be a leading opponent of the Iraq war and — as recently as 2016 – to lead a sit-in on the House floor in support of anti-gun violence legislation. He simply refused to take a narrow view of his responsibility.

Finally, it’s impossible to talk about John Lewis without talking about his faith. Lewis was a civil rights leader, a legislator, an author, and a mentor to many. But he was always a preacher. The day he and I shared the stage, he gave a version of a speech he must have given thousands of times — about growing up in a two-room “shotgun shack” and practicing his preaching with chickens as his audience. It was more than his style or his cadence that marked Lewis as a preacher — he preached, he taught, with his entire life. Perhaps there is someone in our lifetimes who better met our challenge, set out in the Torah, to “do justly, love mercy, and walk humbly with G-d” than John Lewis, but I have no idea who it would be. Each of us finds strength in different places, but for Lewis that place was in his church and in his faith. That, I’m confident, is no small part of what gave him the confidence and conviction he needed to help us usher in a better time.

And how we will miss his leadership. I hope and pray there is a remarkable 23-year old out there today, ready to step forward, and that we will have the wisdom to listen. Or even teenagers preaching to chickens, or perhaps, delivering their b’nai mitzvah talks by Zoom, and getting ready for lives of service.

Be the first to comment on "May his memory be a blessing: 4 lessons we can learn from civil rights hero John Lewis"