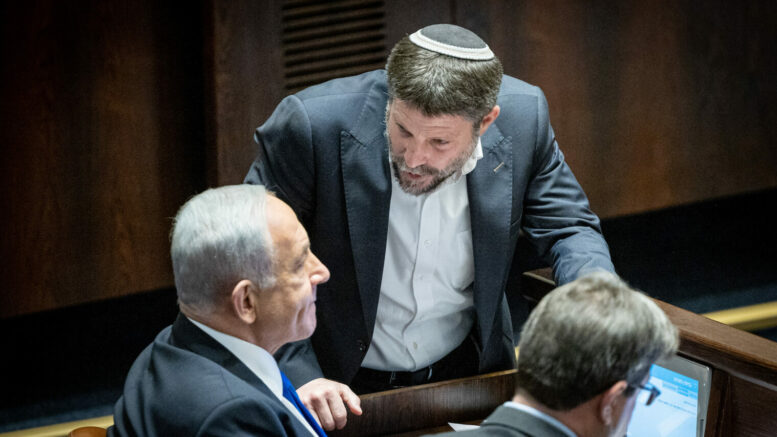 Benjamin Netanyahu, left, speaks with Religious Zionist party head Bezalel Smotrich during a vote in the plenum session at the assembly hall of the Knesset, the Israeli parliament in Jerusalem, Dec. 20, 2022. (Yonatan Sindel/Flash90)

(JTA) – Late into the fourth night of Hanukkah in Israel on Wednesday, incoming Prime Minister Benjamin Netanyahu announced that he had successfully formed a new government coalition after more than five weeks of negotiations.

There are some asterisks: Netanyahu hasn’t officially signed any coalition deals yet with other parties (he has until 48 hours before the new government is seated Jan. 2 to do so), and some of his expected new partners are first demanding new legislation that has been delayed until after coalition talks.

But Netanyahu seems confident that he has formed a coalition that will grant him a comfortable majority in the Knesset, Israel’s parliament. Assuming he pulls it off before the swearing-in date, Israel seems set to welcome a new set of ministers who have set off alarm bells around the globe for their extremist beliefs and records.

Among the most worried observers are the U.S. government and Diaspora Jewish groups, who warn that, should these ministers get their way, Israel would be placing its status as both a pluralistic Jewish and democratic state at serious risk.

So what has everyone so concerned? Before the new government looks to be formally seated in January, here’s what you need to know about who’s set to take power in Israel.

Who’s in the new government?

Netanyahu’s coalition is full of incendiary characters hailing from Israel’s far-right and haredi Orthodox wings — including multiple fringe figures who until recently had been shunned by the country’s political mainstream, but who the incoming prime minister needs on his team in order to hold a governing majority (and attempt to dodge his own corruption charges).

Chief among them is Itamar Ben-Gvir, leader of the far-right Otzma Yehudit party, who will likely hold a newly created ministry position that gives him power over the state’s police force. A onetime follower of Jewish extremist rabbi Meir Kahane, Ben-Gvir has been convicted of incitement over his past support of Israeli terrorist groups and inflammatory comments about Israel’s Arab population. He has also encouraged demonstrations on the Temple Mount by religious nationalists that often lead to sectarian violence, leaving analysts worried about what he would do once placed in control of the state’s police force.

In addition, the new government will include Bezalel Smotrich, leader of the extremist-aligned Religious Zionist party, who has been accused by Israeli security forces in the past of plotting violent attacks against Palestinians. Like Ben-Gvir, Smotrich will also likely be given a newly created ministership role in Netanyahu’s government to oversee Jewish settlements in the occupied West Bank — a move which liberal groups say would lead to “de facto annexation” given his desire to expand settlements and deny Palestinian claims to the area.

Smotrich, who will additionally hold the position of finance minister, is also fervently anti-LGBTQ in a country that prides itself on its treatment of LGBTQ citizens. He has organized opposition to pride parades and compared same-sex relationships to bestiality.

He’s not the only incoming anti-LGBTQ minister: Avi Maoz, head of the far-right Noam party, has described himself as a “proud homophobe” and has called all liberal forms of Judaism a “darkness” comparable to the Hellenistic Empire that controlled the Jews in the Hanukkah story. (A leading Israeli LGBTQ group has invited him to attend a pride parade.) Maoz would headline a new “National Jewish Identity” education position with the power to demand certain content be taught in schools. He has said he wants to fight liberal attempts to “brainwash the children of Israel” with progressive ideology, aligning him with many figures on the American right today.

Another controversial figure in Israel’s new government is Aryeh Deri, head of the haredi Orthodox Shas party, who is set to become interior and health minister pending new legislation. Deri has been convicted of tax fraud and served 22 months in prison in 2002 — which would bar him from holding a ministry position, unless Netanyahu can pass a law allowing him to serve. (There are reports that Netanyahu’s party, Likud, may offer Deri the position of alternate prime minister if the court rules he cannot serve in the Cabinet.) Netanyahu himself is embroiled in a years-long corruption trial, and may be relying on his allies to help shield him from the consequences of an eventual verdict.

Not all Israelis are excited to see Netanyahu return to power. Hundreds of protesters recently took to the streets of Tel Aviv to object to his pending far-right alliance.

Government officials have also lashed out against him in the press. Outgoing Prime Minister Yair Lapid, outgoing Attorney General Gali Baharav-Miara, outgoing Diaspora Affairs Minister Nachman Shai and a coalition of business executives are among the figures warning that the new laws, in the hands of the new government, would turn Israel into an illiberal state.

Benny Gantz — the outgoing defense minister and Netanyahu’s former rival-turned-unlikely-political-partner — had been floated as a wild card coalition contender in the wake of this fall’s election: A unity government involving his Blue and White party and Likud would reduce Netanyahu’s need to cater to far-right parties. But Gantz has not been mentioned in recent reporting on Netanyahu’s coalition negotiations.

How could the new government change Israel?

In some ways, it already has. As a precondition to some of his coalition deals, Netanyahu is pushing laws through the Knesset that grant new powers to his incoming ministers, allowing them expanded oversight of everything from law enforcement to Jewish settlements in the West Bank. The Shas party is also demanding an overhaul of the Israeli court system that would grant more authority over rabbinic judges and less oversight from secular ombudsmen, a move that legal observers in the country warn would cripple the judiciary and open the door to misconduct by rabbinic judges.

Netanyahu’s opposition bloc, which successfully ousted him in 2021 only to see its own coalition crumble a year later, is still in power through the end of the year and tried to delay Netanyahu’s moves with parliamentary gamesmanship this week. While they weakened some of the laws Netanyahu sought to pass, they seem to have failed to prevent the incoming PM’s ability to form a government.

Some figures in the new government also favor policies backed by the country’s Orthodox rabbinate that are hostile to much of Diasporic Jewry. Among the sweeping changes that could soon be on the table:

How will this affect the Israeli-Palestinian peace process?

The answer many experts would give: What peace process?

With Ben-Gvir, Smotrich and other new ministers presenting themselves as openly hostile to Palestinian statehood, the chances of restarting viable negotiations for a two-state solution in the near future are slim to nil. Netanyahu continues to insist that any formal peace process would require the Palestinians to allow Israel to maintain some manner of security presence in the occupied territories, terms which the Palestinian Authority has strongly refused.

With a recent rise in violent attacks on Israelis and Palestinians alike forefront in citizens’ minds, security concerns were a foremost reason why Israel’s recent elections played out so well for the right wing. There is little incentive for the new government to engage in peace talks.

In addition, one of the carrots Netanyahu offered to his incoming coalition members was that the Israeli government would formally recognize a greater number of Jewish settlements in the West Bank, which the international community consider to be part of an illegal occupation. Such a move would even further deteriorate relations with Palestinians and the international community.

Netanyahu’s discussions with other Arab nations, however, are continuing unabated. Seeking to build off of the success of the Abraham Accords, he recently hinted that Saudi Arabia may soon join the normalization agreements, urging the United States to formalize their own relationships with the Saudis.

What is the U.S. response?

The United States is certainly worried about the rightward direction Israel is headed in. President Joe Biden has often boasted of his decades-long “friendship” with Netanyahu, but that relationship is soon to be tested the further the Israeli leader embraces his coalition partners, some of whom the Biden administration has hinted it would refuse to work with directly.

Biden’s current strategy, insiders told Politico, is to work only through Netanyahu and to hold the prime minister responsible for any actions taken by his Cabinet. In interviews with American media, Netanyahu has insisted that he is still fully in control of his government.

Mainstream American Jewish groups including Jewish Federations of North America and the American Jewish Committee have stewed over Netanyahu and tried to reaffirm a commitment to “inclusive and pluralistic” policies in Israel, but they have publicly said they would wait until the new government was formed to make any judgments. Abe Foxman, former head of the Anti-Defamation League, has warned he “won’t be able to support” Ben-Gvir and Smotrich’s vision for Israel.

Other groups, like B’nai Brith International and the American Israel Public Affairs Committee, have characterized the new government as just the latest in a long line of Israeli governments they have successfully worked with.

Most American Jews are politically liberal, support a two-state solution, generally oppose Netanyahu and also highly prize the sense of egalitarianism that his new government has threatened to do away with. Any changes to the Law of Return, in particular, would be catastrophic for the relationship between Israel and American Jews, warns Union for Reform Judaism President Rabbi Rick Jacobs.

Be the first to comment on "Who’s who in Israel’s new far-right government, and why it matters"