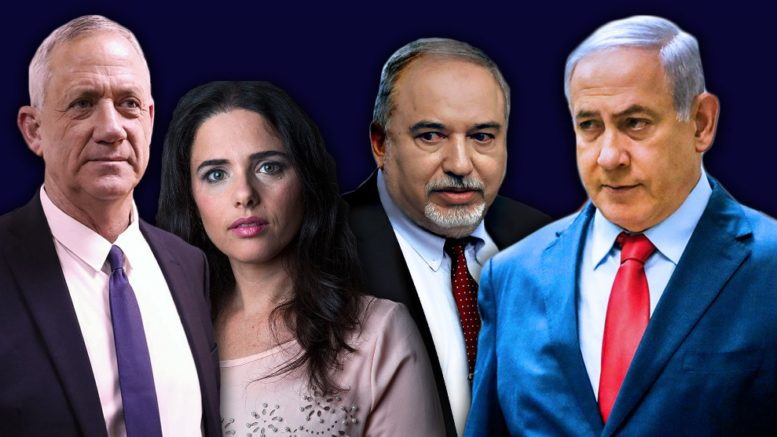 JERUSALEM (JTA) — Israel’s upcoming elections in September — just five months after the last ones in April — are essentially a do-over.

In the April election, the right wing won a majority. But because Israel has a parliamentary system, a bunch of small right-wing parties had to agree to join a governing coalition. They were too divided to do that, so now Israel is trying again.

Unsurprisingly, people have basically the same opinions they had earlier this year. In other words, polls haven’t shifted much.

The main difference between this election and the last one is that a few groups of small parties have decided to join together, meaning fewer parties are running this time. But overall, the Israeli right, center and left are still slated to get the same number of votes as last time.

Here’s a look at who’s running next month, what they stand for and what their chances are.

Oh, yes. The biggest player on the right is still Likud, the party that’s governed Israel for the past decade. It’s running mostly on the record of Netanyahu, who became Israel’s longest-serving prime minister in July.

Polls show that Likud is slated to get 30 seats in Knesset, Israel’s parliament, in the upcoming election. That’s down from the 35 seats it won in April.

Well, things get more interesting to Netanyahu’s right, which has been doing a lot of breaking up, getting back together and breaking up again.

Earlier this year, there were basically two parties to the right of Likud, which broke off from each other before the last election. Now, they’re reuniting. The party, called United Right, is staunchly pro-settlement, hawkish on defense and supports infusing Israel’s culture with religious Judaism.

The party’s leader, Ayelet Shaked, is someone to watch. She’s a secular woman at the head of a religious, mostly male party. That means United Right is the only party headed by a woman. It’s a comeback of sorts for Shaked, who is a popular former justice minister, and who did not win a Knesset seat in April’s election.

The United Right is polling as high as 14 seats, and has said it will support Netanyahu after the next election. Then (because, why not?) its two parties have said they will break up again.

One party left out in the cold is an extremist group called Jewish Power, which has roots in the racist anti-Arab views of the late Rabbi Meir Kahane. Because of a deal brokered by Netanyahu, it was part of the religious Zionist party last time, but didn’t join up this time. It tried to run with a new far-right anti-LGBTQ party, but decided not to. Why? One of the anti-LGBTQ candidates does not wear a yarmulke. Polls show that it won’t get enough votes on its own to enter Knesset.

Netanyahu’s main rival is the centrist Blue and White Party, which was formed before the last election. Like Likud, it hasn’t really changed since April’s election. And like Likud, it’s running mostly on Netanyahu’s record.

The difference is that Blue and White is focusing on Netanyahu’s impending indictment for fraud and breach of trust. They’re painting him as a petty, corrupt and divisive leader.

Other than that, the party is pretty vague on policy. It opposes Israeli annexation of the West Bank, but hasn’t come out in support of a Palestinian state. It’s led by former Israeli Defense Forces Chief of Staff Benny Gantz and former Finance Minister Yair Lapid.

Do they have a chance?

In one word, maybe. In two words, maybe not. Even though Blue and White is probably going to be the biggest centrist party, people are paying more attention to the true X-factor of the election: a man named Avigdor Liberman, the former defense minister.

Until earlier this year, almost nobody called Liberman a centrist. He’s a defense hawk who used to be more right-wing than Netanyahu. His party, Israel Beiteinu, has supported drawing Israel’s borders to leave out Arab cities and applying the death penalty to terrorists.

But he’s also partially responsible for the repeat elections this year. His party’s base is Russian-speaking Israelis, who are mostly secular. So in the April coalition negotiations, he refused to accept the demands of the haredi Orthodox parties, causing a deadlock.

This time, Liberman is the kingmaker. His main goal is to freeze out the Orthodox parties, so he plans to use his party to force a unity government between Likud and Blue and White. A recent poll showed half of Israelis want that as well.

The problem is that the two big parties have spent months demonizing each other, and Blue and White has vowed not to join a coalition with Netanyahu, though it would join with Likud if Netanyahu were somehow forced out.

Wait, what about the Israeli left?

They’re not doing so well. The last time Israel’s left won an election was 20 years ago, in 1999. And this year, the man who won that election came out of retirement to unseat Netanyahu. His name is Ehud Barak.

Barak used to run Labor, a party that dominated Israeli politics back in the day. But Labor has had a tough summer. Its leader Amir Peretz, who is 67 years old, defeated two candidates in their thirties in the party primary. Then he allied with a center-right party called Gesher, which focuses on economic issues. Labor is polling at a paltry six seats.

So Barak created a new center-left party. He immediately began trying to unite the left wing and ended up merging with the far-left Meretz Party and Stav Shaffir, a dynamic young lawmaker who left the Labor Party.

Barak took a modest 10th place in the new party, which is called the Democratic Camp, meaning it would have to win 10 seats for him to earn a place in the legislature. It could be that he needed to lower his profile after being linked to convicted U.S. pedophile Jeffrey Epstein. The Democratic Camp is polling at 7-9 seats, which is a better showing than Meretz alone had in April.

Both parties support a Palestinian state, oppose settlement annexation, are left-wing economically and staunchly oppose Netanyahu. But altogether they’ll make up just a fraction of the Knesset.

Also on the left, Israel’s four main Arab political parties will join together again, after breaking up for the last election. The Arab Joint List won 13 seats in the 2015 election, but after splitting up into two factions, they won a total of 10 seats representing Arab-Israelis in April. The parties hope that the alliance will increase Arab voter turnout this time around.

On Thursday, Joint List head Ayman Odeh said he would not rule out joining a government led by Gantz, but it’s not likely that Gantz would invite him to join, because Arab-Israeli parties never sit in Israeli governing coalitions and usually disagree with both the Israeli Jewish left and right.

Anyone else I should pay attention to?

Moshe Feiglin’s Zehut Party, a quasi-libertarian and nationalist party, captured the attention of young people who support the legalization of marijuana. It polled at up to 7 seats ahead of April’s election, but failed to make it into Knesset. This time, it’s running on its own again. Feiglin said he would support Netanyahu for prime minister.

At least two new political parties with very narrow agendas got a lot of coverage in the Israeli media this week. There’s the anti-LGBTQ party, Noam, which is designed to represent fervently religious Zionist voters. Their slogan is “A Normal Nation in Our Own Land.”

Meanwhile, four wives of Jerusalem cult leader Daniel Ambash have formed a political party called Kama, or Advancing Individual Rights. Ambash, a Hasidic man who was married to six wives and had more than 10 children with them, was sentenced to 26 years in jail for sexual abuse and holding a person under conditions of slavery. The four wives still live together and have called for conjugal visits in prison with Ambash. The aim of the party is to prevent the government from intervening in Israelis’ private lives.

Israelis are going to have a long hot summer to decide which party to vote for.

Be the first to comment on "Who’s running in Israel’s September elections, explained"