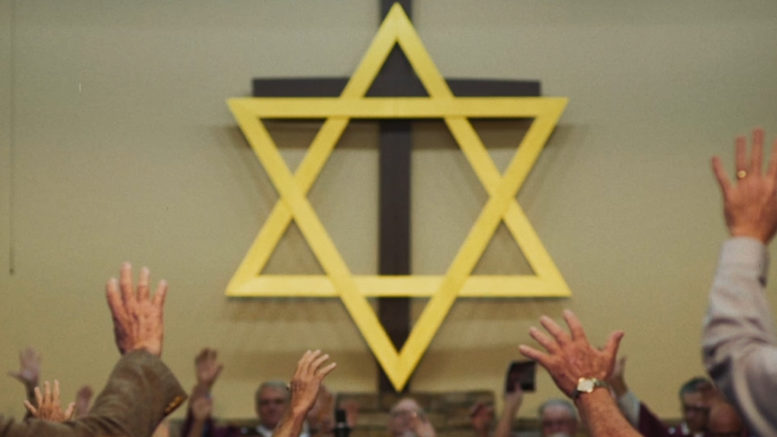 A church in Middlesboro, Kentucky, prays to a Star of David in a still from Maya Zinshtein's documentary "'Til Kingdom Come." (Abraham Troen/'Til Kingdom Come (2019) Film Ltd.)

By Andrew Lapin (JTA) — Evangelical Christians are among the biggest sources of outside money flowing into Israel today, in many cases outpacing support from American Jewish groups. But their intentions in the region are murky and rooted in extremist biblical theology that demands the eventual conversion of Jews to Christianity, and their demands at times run counter to what Jewish groups want.

“There are so many levels that this relationship can be explored: on a faith level, on a political level, on a personal level just with your neighbors,” she said. “And it’s complicated. It’s never black and white.”

The documentary follows various characters in the evangelical-Israel relationship, including a pastor in Bell County, Kentucky, where more than 30% of residents live in poverty who implores his congregation to send thousands of dollars to Israel; Yael Eckstein, CEO of the International Fellowship for Christians and Jews, who spearheads many interfaith charity projects in the region; and members of the Israeli settler movement who align with evangelicals to push U.S. policy in their favor.

Zinshtein is no stranger to exploring fringe elements of Israeli society: Her 2016 film “Forever Pure” examined the racist fan base of the Beitar Jerusalem soccer team. Along with her producing partner, Abie Troen, an Israeli American, Zinshtein spoke to the Jewish Telegraphic Agency about the meaning of “support,” what Jews get out of the relationship and the film’s reaction among American Jews.

This conversation has been edited for length and clarity.

JTA: What do we mean when we talk about American evangelical “support” for Israel? How have you defined the term in this film?

Zinshtein: It’s a great question. And I think the answer for that lies in the word “support.” Because people, I think, usually would consider the word “support” as something objective. But it’s actually a very subjective term.

Forty years ago, this bond was a dirty secret. Rabbi Yechiel Eckstein [the late founder of the International Fellowship of Christians and Jews, and Yael’s father] was expelled from his synagogue for working with Christians. Today it’s a huge transformation. Today it’s really colored as something that you cannot argue with because only if you’re against Israel will you turn down “support” for Israel. But I do think you really need to look into this relationship because many of the things these communities are pushing for are considered by many Israelis as the opposite of support.

I’ll give you one example. When [the American Christian organization] Christians United for Israel [visits Washington] in the film, you see 5,000 evangelicals teach what they should say to their representatives in Capitol Hill, and ask them basically to push then-President Trump to cut aid to the Palestinians. In that moment, as an Israeli, I’m standing there listening to that and knowing that the security community of the State of Israel is extremely against cutting the aid because the security community of the State of Israel knows what it means to have a humanitarian crisis on our borders. Wait a minute, is this support of Israel? Or is it actually promoting a very specific agenda, which is quite an extreme right-wing agenda, about this place?

And, you know, a month after this event, Trump actually cut aid to the Palestinians. And then half a year later, Bibi Netanyahu approached Trump and asked him to give it back. And Trump said no.

Troen: There are clear demographics in this case. The generous [estimates] of Jews in the world are under 20 million. Whereas, in the not-so-generous estimates of evangelical Christians, it is 600 million and growing. It’s one of the fastest growing religions in the world. And when we think about the fact that the Jewish people in Israel [are part of] their theology, that is something that if you’re an Israeli politician or a Jew, you can’t just throw it away and say it’s not relevant to us because it really is.

What drew you to make this film?

Zinshtein: I started the research in summer 2017. The United States had a new president, President Trump, and it was very clear that he’s widely backed by this [evangelical] community, and also that promises have been made during the campaign about Israel. And on the other hand, here in Israel, all the questions of Christian support are, basically, most of the Israelis would say, “We don’t know,” or “There are these Christians that love us.” And that’s it. I found that it’s a really unexplored field. Today I think it plays a major role in our politics here, in our relationship with the Jewish community in the United States.

What was your reaction to being in the Kentucky church that was sending thousands of dollars to Israel, and what was their reaction to having you there?

Troen: Curiosity. These were people who had Israeli flags waving outside of their church, and many had not met an Israeli, let alone a Jew. That led to a whole host of questions, both when the camera was on and off us.

It is mind blowing, just visually, the kind of stuff that we saw there: the Star of David on the cross, larger-than-life Ronald Reagan heads in people’s garages. And I think there was, from their end, an almost growing flirtatiousness to see if we would convert. By the end of the day, they wished to get us baptized on camera.

We also learned a lot about each other as human beings. Our hope was to understand what faith meant. I think we got several answers to that. And also what faith meant to an impoverished community [Bell is one of the poorest counties in the country], and what role Israel played into their imagination, hope and dreams.

You also spoke to several Jews who have maneuvered through this relationship for their own purposes. What was your read on them?

Zinshtein: It was really amazing to see how there are certain [areas of discussion where] the people from the Jewish side of the bond just don’t go there, because if they [do], all this structure will just collapse. It was really interesting to see how they constantly navigate within this thing. Of course I know, and they know, there is a huge elephant in the room.

When Sondra Oster Baras [founder of Christian Friends of Israeli Communities, an organization that encourages Christians to support settlements in the West Bank] stands there holding the Bible and says, “This is my Bible, and you have a little bit here, but all this we share” — that “little bit” is Jesus! It’s not little, it’s actually pretty huge. And she’s still really convincing. [She’s someone who] knows how to have this conversation and just ignore, you know, some situations where the irony is really screaming at you.

Troen: The one anecdote I can share is the moment when I felt the most Jewish in my life, and when I felt what being a minority really means. We filmed with the [Israeli settler] head of the Samaria region at the Republican Study Committee, which is the biggest faith-based caucus on Capitol Hill. And it was a room packed with prominent congressmen, senators and aides, heads of foundations, all religious, Christian. They started out with a prayer. And it was followed by praising the fact that transgender people had been banned from the U.S. [military] that day. And the room erupted into a euphoric applause.

And after this had happened, the head of the Samaria region was brought on stage and was asked to give his presentation about the prophecy coming to life and why we need evangelical Christian support to support the settlements. And he started out by saying, “We are great friends, us and you.” And it was almost comic, seeing a room filled with hundreds of Christians and a tiny Jewish entourage saying, “We are great friends,” like we’re in this together. And it was not so comical to realize that he was saying this after the room had erupted into applause for transgenders being banned from the U.S. [military].

For me, it was the realization of the fact that people who are transgender, just like Jewish people, are a symbol in the imagination of this larger group. And being a symbol in other people’s minds is a very strange place to be.

Zinshtein: When the Jewish side of the bond says, “We’re great friends, we’re working together,” it almost feels to me like there’s a huge elephant and a tiny ant on his back.

One of the Christians said to me — and I really appreciated the honesty — he told me, “Listen, you need to understand. When they say to you that they love you, they mean that they love Jesus. It’s not personal to you. You’re the key, we cannot make it without you. And we know what happens with the key when the door is open.” And that was a moment when I said, “Now I get it.”

What would you like American Jews who watch your film to come away from it thinking?

Zinshtein: Abie and I have already had quite a few talks in Jewish film festivals, in synagogues. I think this issue really bothers the Jewish community. And so many of them have been telling me, “Finally, someone talks about this.” As an Israeli, it worries me as well, where our relationship is going. And what it means when the prime minister of Israel says to Pastor [John] Hagee that he is our best friend. I really think that the Jewish community in the United States, and the Israeli community, we should have conversations about that.

It’s true that you have a new president, Biden, but the Christian evangelicals, they’re not about to disappear. So these powers are here to stay. Today, by the numbers, one-third of all aliyah [programs] are financed by Christian evangelicals. So the Jewish money is going down and the Christian money is going up. What will happen in 10 years? How is this bond affecting the younger generations of American Jews?

We have fascinating Q&As, and I won’t say where, but not in New York and L.A. — more in the rural places where the Jewish community is small, they’re really struggling [with this relationship]. They’re afraid to come to the Q&A. [They ask,] “Is the Jewish federation going to put their logo on the publicity? Or should they be more cautious?” These are areas where the Jewish community is a tiny spot within a huge community of evangelicals. And on a certain level they’re working together, they need to cooperate. And they actually feel, on the ground, like this is an unequal relationship.

I know that there are so many lovely [evangelical] people. I met them. They opened their houses for me. It’s never black and white. But there are questions to ask. What are the consequences of their actions?

Be the first to comment on "What do evangelicals want with Israel? A new documentary goes looking for answers."