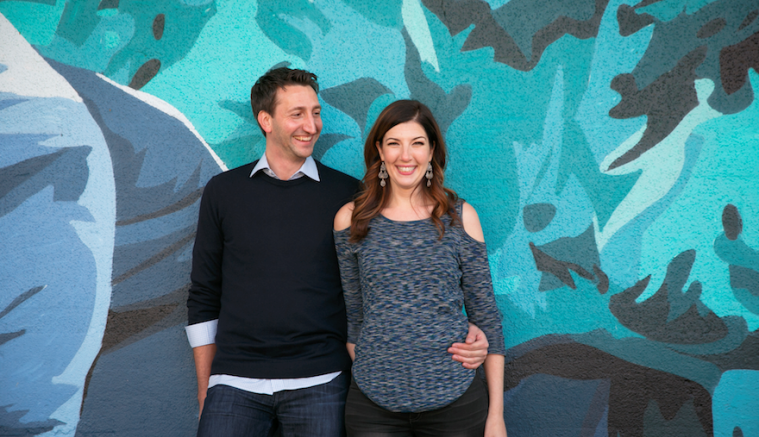 indy Sher and Kurt Anderson are to be married on the same weekend as Tu B’Av, the Jewish holiday of love and matchmaking. (Courtesy of Sher)

CHICAGO (JTA) — My sister was married on a beautiful summer day many years ago.

Those of us in the wedding party took pictures in a garden before the ceremony. As maid of honor, one of my duties was to hold up the train of her dress so it wouldn’t drag through the dirt. But there was a lot of dirt, and the dress was soiled despite my best efforts. She couldn’t see the grime, but her bridesmaids could, so I silently made eyes conveying my distress over the maid-of-honor fail.

I can’t keep a secret from my sister. So a minute later, nearly in tears, I blurted out, “Um, look at your dress,” pointing to the gray smudges on the bottom edge of the gown.

All these years later, despite the garden mishap, they’re happily married with a brood of beautiful sons.

In American culture and the Jewish community, too, we get caught up in weddings. We pour ridiculous sums of money into them — the average price tag for a wedding rose to a record $35,329 in 2016, according to The Knot.

But more than that one big day, it’s all the days after the wedding that count — it’s really about the marriage.

Torah teaches us about the origins of (what we now call) marriage in another more famous garden — the Garden of Eden. For that’s where G-d saw that “it is not good for man to be alone” (Genesis 2:18) and created the first human couple, Adam and Eve. Marriage for them — and for all the married couples who follow(ed) in their footsteps down the aisle — was and is both meant to ensure the survival of humanity and help people find companionship and joy.

Now the Garden of Paradise may be gone, but our hopes for happy marriages endure.

One of the Jewish wedding blessings we still say under the huppah reflects that hope: “Make these beloved companions as happy as were the first human couple in the Garden of Eden.”

That’s a tall order, and ought to take a lot more energy than whether to have sushi or mini hot dogs during the cocktail hour.

In a few days, it’s my turn to get hitched — in fact, on the same weekend as Tu b’Av, the ancient Jewish holiday of matchmaking, which starts this year on the evening of July 26. It’s the day, the Talmud tells us, when young women would go out dressed in white and dance in the vineyards — in the gardens, if you will — and try to catch the eye of eligible bachelors.

My fiancé and I are having fun planning the wedding — so long as we remember not to take it too seriously. Like when we spent hours singing along (loud and off-key) to Motown, big band and pop classics to select for our wedding playlist. Oh, and there were many buttercream cakes to be tasted —now that’s my version of paradise.

But I’d never given thought to some of the other details in planning a wedding; I spend more time daydreaming about what comes next.

Take the wedding registry. I didn’t care whether we choose All-Clad or Calphalon pots and pans, nor could I tell you the difference between the two brands. What I do care about is sharing joyous meals around the kitchen table with my future husband and, G-d willing, our children someday.

And then there’s the décor. I was asked to post some of my “dream wedding” pics on Pinterest, which for me first meant signing up for Pinterest. Then I was supposed to envision “the look” of the wedding — the colors, the flowers, down to the napkin rings.

When I picture the wedding, I don’t see napkins. What I do see is my fiancé standing under the huppah waiting for me with our loved ones surrounding us. And the only rings I care about are the ones we’ll exchange to signify that I am his beloved and he is mine.

There’s an episode of “Sex and the City” in which Charlotte is married for the second time after an unhappy first marriage. During the second (Jewish) wedding, the bride trips under the huppah, Miranda’s toast to the bride and groom goes up in smoke, and Charlotte spills wine on her gown.

When the bride cries to Carrie about all the calamities, Carrie consoles her by reminding her that her first wedding was picture-perfect, but the marriage — not so much.

“I say the worse the wedding, the better the marriage,” Carrie tells her friend. “[Y]ou have a wonderful man who loves you.”

Maybe it’s because I’m a little older than the average bride — or maybe it’s some of my past experiences that have led me to this place and helped me put the wedding day in perspective. Whatever it is, I won’t sweat the details; I’m not going to fret over boutonnières, table numbers or the bustle on my dress staying bustled. Instead, I’m going to stay focused on what I’ve wanted for a very long time: a wonderful man who loves me to build a home with.

But maybe, just the same, we’ll skip the garden pictures.

(Cindy Sher is the executive editor of Chicago’s JUF News, where a version of this article first appeared, and assistant vice president of marketing & communications for the Jewish United Fund/Jewish Federation of Metropolitan Chicago.)

Be the first to comment on "Weddings are lovely, but it’s the marriage that matters"