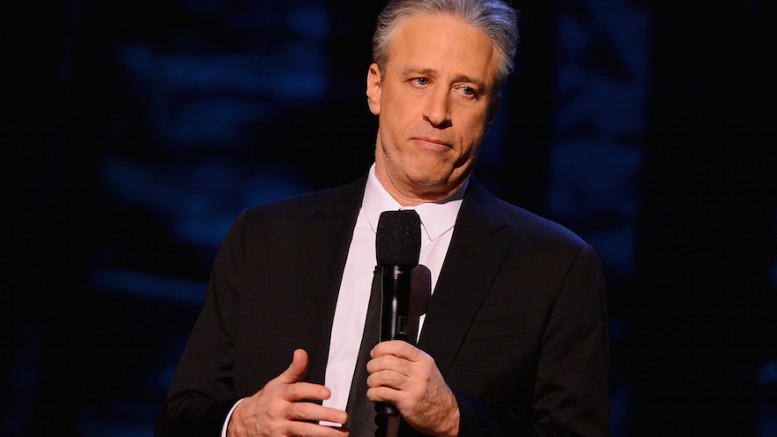 Comedian Jon Stewart was in no mood for jokes Thursday evening in the wake of the shooting in a Charleston, S.C., church that left nine people dead.

– Jon Stewart opened up The Daily Show June 18 with a powerful, scathing and heartbreaking monologue about the church shooting in Charleston, South Carolina that left nine people dead. After warning the audience that he had nothing for them “in terms of jokes and sounds,” Stewart launched into a probing examination about how the incident in South Carolina happened and why these shooting will continue to happen.

“Maybe if I wasn’t nearing the end of the run or this wasn’t such a common occurrence, maybe I could have pulled out of the spiral, but I didn’t,” Stewart said. “So I honestly have nothing other than just sadness once again that we have to peer into the abyss of the depraved violence that we do to each other and the nexus of a just gaping racial wound that will not heal, yet we pretend it doesn’t exist… I’m confident, though, that by acknowledging it, by staring into that and seeing it for what it is, we still won’t do jack shit. Yeah. That’s us.”

After The Daily Show episode aired, the alleged Charleston shooter, Dylann Roof, reportedly confessed to the South Carolina police, telling them that he hoped to start a race war. “I heard someone on the news say ‘Tragedy has visited this church.’ This wasn’t a tornado; this was a racist,” Stewart said. “This was a guy with a Rhodesia badge on his sweater. I hate to even use this pun but this one is black and white, there’s no nuance here.”

Stewart also criticized South Carolina for continuing to celebrate their Civil War history – “the roads that black people drive on are named for Confederate generals that fought to keep black people from being able to drive freely on that road,” Stewart says. He also discussed America’s own lack of response to these incidents when we find out the violence is self-inflicted as opposed to a terrorist attack from outside parties.

“I don’t want to get into the political argument about guns… what blows my mind is the disparity of response between when we think people that are foreign are going to kill us and us killing ourselves,” Stewart said. “If this had been what we thought was Islamic terrorism, it would fit into our… we invaded two countries and spent trillions of dollars and thousands of American lives and now fly unmanned death machines over five or six different countries, all to keep Americans safe… Nine people shot in a church. What about that?”

“We’re bringing it on ourselves. And that’s the thing: Al Qaeda, all those guys, ISIS, they’re not shit compared to the damage that we can apparently do to ourselves on a regular basis,” Stewart added as he neared the end of the monologue. He then apologized to the audience, “Sorry about no jokes.”

Click here to watch the monologue in a CBC report.