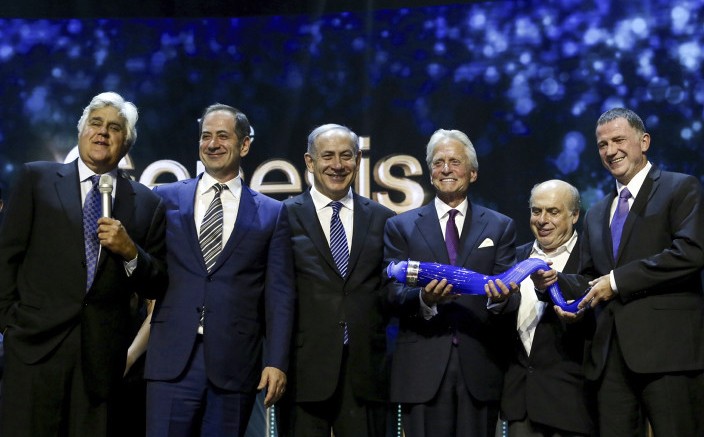 JERUSALEM (JTA) — Michael Douglas hadn’t heard of the Genesis Prize when he found out that he’d won it. In fact, the Oscar-winning actor was surprised to discover he was even in the running for an award designed for those who inspire fellow Jews.

His father, actor Kirk Douglas, is Jewish. But his mother, actress Diana Dill, is not — Douglas thought that would disqualify him.

“I felt that they made a mistake because my mother is not Jewish,” Douglas told JTA in an interview Wednesday in Jerusalem. “I saw that as a barrier most of my life.”

Douglas is in Israel to receive the second annual $1 million Genesis Prize, which honors those who have excelled professionally while showing dedication to Judaism or Israel. The prize is endowed by the Genesis Prize Foundation, a group of Russian-Jewish businessmen who fund identity-building programs for Russian Jewry.

Douglas, who is married to actress Catherine Zeta-Jones, will receive the “Jewish Nobel,” as the prize has been nicknamed, in a ceremony Thursday. The inaugural honor went to former New York City Mayor Michael Bloomberg last year.

Some have criticized the initial prizes being awarded to multimillionaires. But Douglas praised the decision, saying that choosing celebrities gives the award and its message publicity. He said that an Op-Ed he wrote decrying anti-Semitism that was published in the Los Angeles Times in March gained attention because of his fame.

“It was quite smart of the foundation to pick a celebrity,” he said. “Celebrities get your message out and across. I don’t think [the Op-Ed] would have received the attention if it were someone else, but because you’re a celebrity you get the attention.”

An actor and producer who won an Academy Award for his portrayal of Gordon Gekko in 1987’s “Wall Street,” Douglas recently began reconnecting to his Jewish identity. He said he “drifted away from the religion” because some considered him non-Jewish, but he began to explore his Jewish roots after his father, who was raised as an Orthodox Jew, was in a helicopter accident in 1991.

Douglas’ son, Dylan, has also brought him closer to Judaism. Dylan befriended Jewish kids at school and ate Shabbat dinners at their homes throughout the year. Because of the experience, Dylan decided to attend Hebrew school and have a bar mitzvah.

“After five, six, seven months, he came back and said, ‘I feel something. My soul feels warmer,’” Douglas said.

Following the bar mitzvah, the family took a celebratory trip last year to Israel. Douglas wrote the Op-Ed urging readers to fight anti-Semitism after Dylan was verbally accosted at a pool while wearing a Jewish star necklace.

“So that is our challenge in 2015, and all of us must take it up,” he wrote. “Because if we confront anti-Semitism whenever we see it, if we combat it individually and as a society, and use whatever platform we have to denounce it, we can stop the spread of this madness.”

Speaking to JTA, Douglas kept coming back to feeling excluded from the Jewish community. Winning the Genesis Prize, he said, has finally made him feel like he belongs.

“It was a cathartic experience, to say, ‘Hey, we acknowledge and recognize you as a Jew,’” he said. “It was a wonderful, emotional experience. I’m one of those who never felt accepted.”

Douglas intends to use the prize money to reach out to other Jews from intermarried families seeking a connection to the community. He plans to begin by funding an outreach program through Hillel, the campus Jewish organization, which can reach a large number of students with intermarried parents.

“To try to reach out to interfaith couples who are not associated with a synagogue or temple is difficult,” he said. But on campus, “you have a captive audience.”

Be the first to comment on "Michael Douglas: I ‘never felt accepted’ as a Jew"