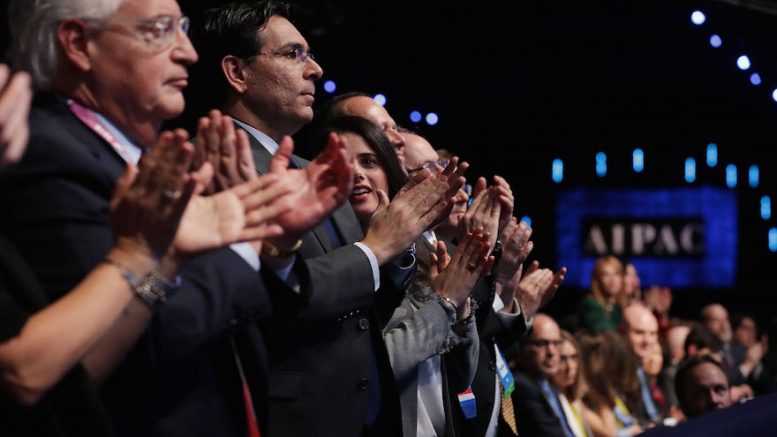 WASHINGTON, DC - MARCH 05: Attendees stand a applaud for U.S. Vice President Mike Pence as he address the American Israel Public Affairs Committee's annual policy conference at the Washington Convention Center March 5, 2018 in Washington, DC. With thousands of delegates and attendees, the annual conference is the the largest gathering of the pro-Israel movement in the United States. (Photo by Chip Somodevilla/Getty Images)

WASHINGTON (JTA) — A poll last year by the American Jewish Committee showed that 77 percent of American Jews disapproved of President Donald Trump’s job performance. American Jews had voted 70 percent to 25 percent in favor of Hillary Clinton over Trump. With the exception of the Orthodox, majorities of all the major Jewish denominations voted for Clinton.

So how did it feel for anti-Trump Jews to hear the president cheered again and again at this year’s annual conference of the American Israel Public Affairs Committee?

“I think there’s a lot of tension,” said Sherie Silverman of Maryland. “People like myself who are ardent Zionists are confused because we love what Nikki Haley is doing, and moving the embassy we love … but we were disappointed with [Trump’s] character and with many of his policies in general.”

The president himself did not appear at the AIPAC event here this week, but his administration was well represented and his name was cheered often. Vice President Mike Pence called him the most pro-Israel president ever, to applause. Monday’s star, U.N. Ambassador Nikki Haley, got 12 standing ovations. Israeli Prime Minister Benjamin Netanyahu, in a well-received speech the next day, lauded Trump.

Speakers from both parties repeatedly praised Trump’s recognition of Jerusalem as Israel’s capital, and his plans to move the U.S. Embassy there in May. They thanked him for standing up to Iran and vowing to amend — or withdraw from — the Iran nuclear deal. They applauded the administration’s standing up for Israel at the United Nations.

“Thanks to the president’s leadership, the alliance between America and Israel has never been stronger,” Pence said to cheers. “America stands with Israel today, tomorrow and always.”

Several conference participants suggested that it was possible to compartmentalize — appreciating the president’s actions on Israel while not endorsing him in general. AIPAC is, after all, a single-issue lobby that does not purport to speak for the Jews or their broader agenda items, including civil rights, immigration, women’s rights, religious freedom and fighting anti-Semitism. Many who attend the conference say the mere act of showing up is a statement of support for Israel and partisan politics are for other settings.

“If I can make myself not look at anything else about him, then I think what he’s done for Israel is amazing,” said Risa Kipnis, a conference delegate from Maryland. “I’m not quite there yet. He’s just, he’s crazy. I just think the way he behaves and some of the things he tweets and his past with women — I just don’t have anything nice to say about him.”

Republican conference participants, meanwhile, were pleased with the reception for the president’s name. For some it was a confirmation that their party was the best home for pro-Israel Americans. And even though a few had reservations about some of Trump’s conduct, they saw that as a small price to pay for a pro-Israel administration.

“To me, he’s a neighbor and New Yorker like I am,” said Stan Monsowitz, who lives in New York City and winters in Boca Raton, Florida. “He’s crazy like a lot of New Yorkers are, but he’s so pro-Israel and pro-U.S., I love what he’s doing. If he kept his mouth shut and kept off Twitter, it would be a lot better.”

The participants also said they believed the applause was for policy, not the person. Jeremy Burton, executive director of the Jewish Community Relations Council of Greater Boston, also thought that those who were perceived as closer to Trump, like Pence, were given less applause.

“Some of it was for specific policies,” Burton said. “There are specific things this administration will do that are things we will appreciate.

“Look at the differing levels of applause. Nikki Haley got resounding and overwhelming applause, and maybe other people who are perceived as closer to him on a personal level got a little less.”

Throughout the conference, AIPAC emphasized the importance of both bipartisanship and attracting progressives to the pro-Israel movement. Left-wing speakers talked about Israel’s unions and diverse civil society.

Two years ago, the lobby’s policy conference spurred controversy when then-candidate Trump received heavy applause for cheering the end of Obama’s term; AIPAC officials apologized the next day. This year, Democratic officials nearly abstained from criticizing Trump from the podium. And as usual, both Republican and Democratic officials talked about how partisanship should end when it comes to supporting Israel.

In that vein, some liberal participants said they had no problem with an event applauding high-ranking officials who take time to address the conference, regardless of party. Cole Bloomfield, a college student from Oakland, California, said he had perceived AIPAC as right wing. But he felt the conference did a good job respecting Trump while still appealing to people across the political spectrum.

“I wouldn’t have voted for Trump, but I still respect that he’s the president,” Bloomfield said. “I respect that Mike Pence is the vice president. It’s important to be respectful and cordial if you want any sort of bipartisanship to work.”

Be the first to comment on "Most US Jews oppose Trump. He was cheered at AIPAC. Awkward?"