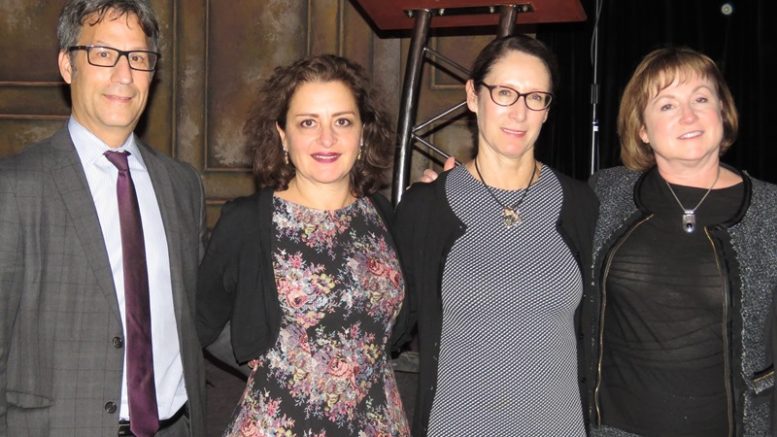 She spoke about her journey from disengagement to becoming a top leader in the Jewish Federation in Vancouver.

Karen was an elite athlete in her formative years – a competitive swimmer who participated as a teen in the 1965 Maccabi Games in Israel. At 19 she went on to qualify and compete in the 1972 Munich Olympics as part of Team Canada.  Her experience in Munich was life altering; what should have been the pinnacle of her athletic career was a traumatic experience that centred around the tragic kidnapping and murder of 11 Israelis at the games.

Karen explained that following her event, she and some other athletes went out for the evening and returned late to the Olympic Village. As they scaled the fence for a quick reentry to the village after curfew she noticed 4 other people dressed in black track pants were scaling the fence at the same time. “They didn’t look like athletes, but they didn’t look threatening either,” she recalled.

That night alarms went off as 9 Israeli athletes and their coaches were blindfolded and kidnapped from the village. Karen later learned that the four men who had scaled the fence behind her were members of the Palestinian terrorist group Black September, which was responsible for murdering the 11 Israelis in Munich.

Karen said that she returned to Canada following the memorial service for the athletes; she was shaken but she put the experience behind her and went on with living an active life – relatively uninvolved with her Jewish community.  She kept silent about what she’d witnessed for 34 years.

In 2006, Karen had an opportunity to co-chair swimming for the JCC Maccabi Games which were being held in Vancouver. She found her voice when she was asked to deliver a tribute to the 11 Israeli athletes. In front of an audience of 10,000, Karen revealed her story. It was a turning point in her own Jewish journey.

“Giving that speech and telling my story reconnected me to the Jewish community,” she said. “It got me involved to a place where I wanted to give back. Today, I’m committed to community and I know how important it is to me.”

Karen’s journey has led her from complete disengagement to complete commitment to her community.  She has traveled to Jewish communities all over North America telling the story of what she witnessed and how it has affected her. “Each time I tell it, I’m emotional. But at the same time, I feel like if nothing else, I’m keeping the memory of the slain athletes alive,” she said.

Karen recited the names of the eleven Israelis in front of the Edmonton audience at the UJA kickoff and it sent chills up the spines of everyone in attendance.

She said that her feelings about the Olympic Games remain deeply ambivalent to this day. She is resentful that the International Olympic Committee (IOC) has not properly honoured the athletes in the opening ceremonies. “In Rio, before the games started, they did a memorial, but they’ve never mentioned the names of those athletes in front of thousands of people,” she said.

The Israeli government and the governments of several other countries asked for a minute of silence to be observed during the London Olympics in August 2012, the 40th anniversary of the Munich Massacre, but the IOC refused.

“Telling my story has been a transforming experience in my life,” she reflected.

“There’s been a direct interplay of speaking out and connecting to my community, and it’s given my life immense reward and purpose,” she noted.

Karen’s address spoke volumes to the Edmonton audience about the importance of being connected to the Jewish Community and using one’s own talents and experience to benefit the community.

The Israeli musicians – Shaish with his angelic voice and award winning composer Adaddi on the piano – provided a thoroughly delightful set ranging from Israeli classics like Yerushalayim Shel Zahav to Broadway Hits from Fiddler on the Roof and all time favorites like Leonard Cohen’s Hallelujah. The Edmonton audience joined in where ever possible and the musicians encouraged the singalong interaction. The standing ovation at the close of the performance was strong indication of how enjoyable the performance had been.

Closing remarks were provided by 2018 Edmonton UJA campaign co-chair Ron Sorokin who thanked everyone for attending and encouraged them to give generously – both in terms of time and funds –  to the campaign. He reiterated co-chair Karen Oshry’s and Jewish Federation of Edmonton President Steve Shafir’s earlier remarks about the important role that UJA campaign plays within our Jewish community in Edmonton.