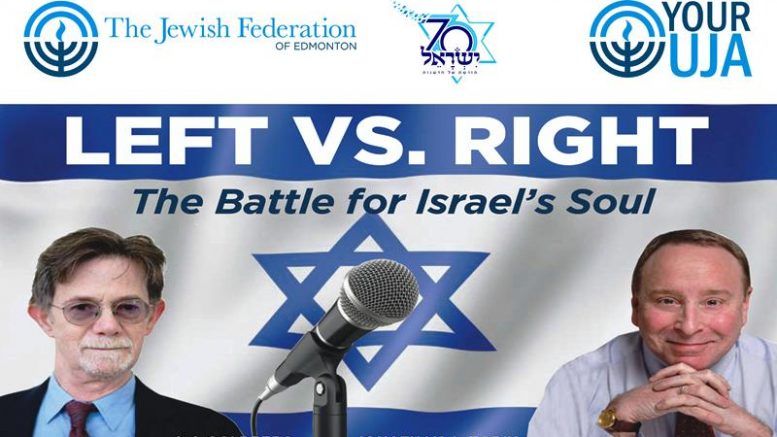 (EJNews) – A riveting debate that pits right against left about critical issues concerning the state of Israel will be held at Beth Shalom Synagogue (upper auditorium) on Monday October 22 at 7 pm.

Crucial and controversial issues will be discussed: Is Israel locked in a tragic dispute between two peoples claiming the same land – or a global conflict between Western democracy and Islamist terrorism?  Is partition into two states the only way to ensure Israel’s survival – or is it the surest path to ever-increasing bloodshed and possibly even endangering Israel’s survival?

Jonathan S. Tobin will argue that Israel stands on the front line of a global conflict between Islamist terrorism and Western democracy. He is the senior online editor and chief political blogger of Commentary, the neo-conservative magazine of opinion and ideas covering American politics, international affairs, Judaism and social, cultural and literary issues. Tobin was executive editor of The Jewish Exponent in Philadelphia from 1998 through 2008. He is a frequent commentator on domestic politics, Israel, and Jewish affairs.

J.J. Goldberg will argue that Israel could enter a regional alliance with moderate Sunni states if it accepted the Saudi-led Arab Peace Initiative leading to a Palestinian state. He is editor-at-large of the newspaper The Forward, where he served as editor in chief for seven years. In the past he served as U.S. bureau chief of the Israeli news magazine Jerusalem Report, managing editor of The Jewish Week of New York and as a nationally syndicated columnist in Jewish weeklies. He previously served as an education specialist with the World Zionist Organization in Jerusalem and was a member and secretary of Kibbutz Gezer, near Tel Aviv. Goldberg is the author of Jewish Power: Inside the American Jewish Establishment, published in 1996.

Sponsored by the Jewish Federation of Edmonton, Israel at 70 and UJA, everyone is welcome to attend the debate that is being called “Left vs Right: The battle for Israel’s soul.”  Light refreshments will be served. 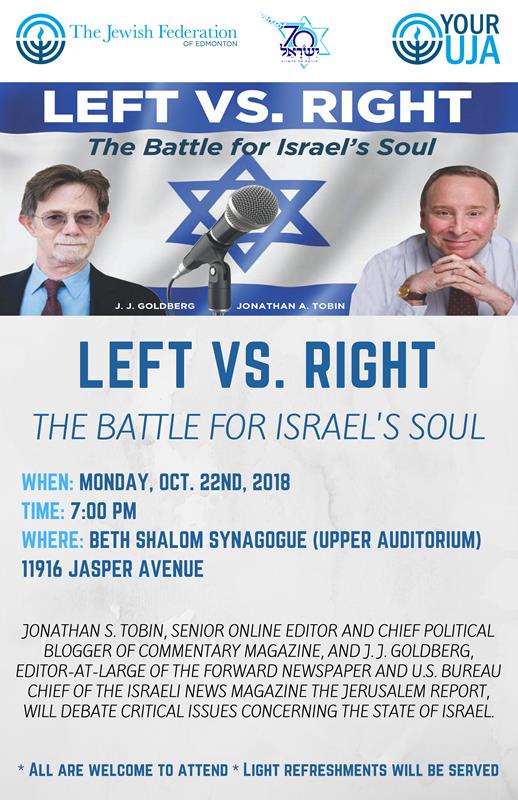 Be the first to comment on "Left vs Right: The Battle for Israel’s Soul – In Edmonton on October 22"