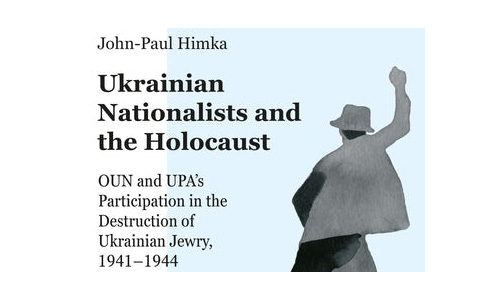 (AJNews) – Historian John-Paul Himka, who published a book this year on Ukrainian nationalists’ culpability in the Holocaust, presented this year’s Toby and Saul Reichert Holocaust Lecture at the University of Alberta on Oct. 29.

Himka said he would provide a “verbal tour” of his book, Ukrainian Nationalists and the Holocaust: OUN and UPA’s Participation in the Destruction of Ukrainian Jewry, 1941 – 1944 at the outset of the lecture, which was hosted by the Wirth Institute for Austrian and Central European Studies at U of A.

The two groups referred to in the book’s title are the Organization of Ukrainian Nationalists (OUN) and its armed wing, the Ukrainian Insurgent Army (UPA). who sought to secure a homeland for ethnic Ukrainians. Their efforts were focused on Volhynia and Galicia in eastern Poland and Bukovina in northern Romania, Himka explained.

After the Molotov-Ribbentrop Pact between the U.S.S.R. and Nazi Germany in 1939, Volhynia and Galicia came under Soviet control, as did northern Bukovina a year later. Once war broke out, the Ukrainian nationalists and Nazis shared a common enemy — the Soviet Union.

“One of the reasons is history as written by the nationalists omitted accounts of participation in the Holocaust and downplayed their connection with the Germans,” said Himka. “For a very long time, it was not clear what they had done.”

German documents, which were integral to Raul Hillberg’s landmark 1961 work The Destruction of European Jews that was formative in the field of Holocaust Studies, likewise downplayed the role other nationalist forces played in the Holocaust.

“Everything was being seen through the eyes of the perpetrators,” said Himka.

After the collapse of the Soviet Union, the view from the other side of the Iron Curtain was made available to historians, but there were still blind spots, he added.

While victim testimonies were integral to the historical narrative of the Holodomor famine of 1932-33, scholars of Ukrainian history ignored similar types of sources when examining the history of the OUN and UPA, which Himka identifies as a nationalist double standard.

“We use testimony and memoirs for our atrocity, but we don’t include it for atrocities we ourselves might commit as a group,” said Himka.

OUN, which was founded in 1929, sought to forge an independent Ukrainian state by any means necessary. For its first decade, it committed assassinations, bank robberies and destruction of property.

“Like many movements of the time, it came under the influence of Italian fascism and German national socialism,” Himka said, adding that this was exacerbated when Ukrainian territories came under Soviet rule in 1939.

The OUN literature from the time is replete with references to Jews as agents of Communism who deserved their fate, Himka says.

OUN-affiliated militias killed at least 15,000 Jews from July-August 1941, he said. The next month, the Nazis, with assistance from Ukrainian police officers, massacred more than 33,000 Jews at Babi Yar.

However, the Nazis didn’t reciprocate the OUN’s sympathies.

“The Germans did not agree to a Ukrainian state, and in fact they placed the major OUN leaders and placed them under house arrest, because they did not want the Ukrainian state encroaching on their Lebensraum,” said Himka.

By 1943, relations between the Nazis and OUN had frayed, but the recently-formed UPA continued massacring Jews and Poles.

“Certainly, the Germans are absolutely the most responsible for the Holocaust — no question,” said Himka, “but they could not have done what they did without local help.”