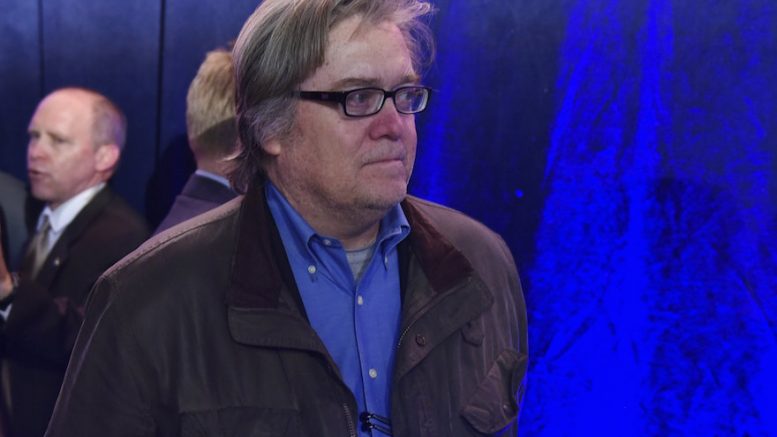 (JTA) — On Sunday, President-elect Donald Trump appointed Stephen Bannon to be his chief strategist. Before joining Trump’s campaign, Bannon was the chairman of Breitbart News, a site steeped in conspiracy theories that has featured the white supremacist, anti-Semitic ideologies of the so-called alt-right. Bannon has also been accused of making anti-Semitic remarks himself.

Here are five things you need to know about Bannon, who will have the president’s ear.

Breitbart News, one of the most vociferously pro-Trump outlets during the presidential campaign, has been accused of racism and Islamophobia. Jewish critics have also accused it of anti-Semitism.

In May, Breitbart ran a column with a headline calling anti-Trump conservative writer Bill Kristol a “renegade Jew.” The column, by conservative activist David Horowitz, said Kristol led a “small but well-heeled group of Washington insiders” who aimed to undermine Trump, even though he won the nomination. Horowitz, himself Jewish, also accused Kristol’s plan of putting Israel in danger by enabling Hillary Clinton to win the election.

In September, Breitbart ran another column accusing a Jewish anti-Trump writer, the Washington Post’s Anne Applebaum, of helping orchestrate “attempts to impose a globalist worldview upon citizenries that reject it” alongside a coalition that included George Soros — a favorite Jewish target of the alt-right.

Breitbart has failed to remove some blatantly anti-Semitic comments, including one that says “Heil Hitler,” below the column.

His ex-wife claimed in a sworn statement in 2007 that Bannon made three separate anti-Semitic remarks when they were choosing a school for their daughters. The ex-wife, who also accused Bannon of attacking her, made the statement during divorce proceedings.

In one instance, according to NBC News, Bannon asked a school director “why there were so many Hanukkah books in the library.” At another school, the ex-wife said, Bannon “asked me if it bothered me that the school used to be in a temple. I said no and asked why he asked … he did not respond.”

Bannon’s spokeswoman denied the allegations in a statement to NBC News.

“At the time, Mr. Bannon never said anything like that and proudly sent the girls to Archer for their middle school and high school educations,” she said.

In addition to the anti-Semitism allegations, an article in the left-wing Mother Jones magazine called him “a champion of the most ardent anti-Muslim extremists” because he brought anti-Muslim guests on his radio show.

While still at Breitbart, Bannon told Mother Jones, “We’re the platform for the alt-right,” in an August interview. The alt-right — a loose movement that has gained prominence during this election season — promotes white nationalism and has been accused of being racist, Islamophobic and anti-Semitic.

The alt-right, short for alternative right, “encompasses a range of people on the extreme right who reject mainstream conservatism in favor of forms of conservatism that embrace implicit or explicit racism or white supremacy,” according to the ADL. “People who identify with the alt-right regard mainstream or traditional conservatives as weak and impotent, largely because they do not sufficiently support racism and anti-Semitism.”

Joel Pollak, a Breitbart editor who is Jewish, defended Bannon in a comment Monday on Facebook, calling the allegations against Bannon a “smear.” His post also said Bannon is someone “without a shred of antisemitic prejudice, who worked closely with Jews and started a pro-Israel website.”

Bannon has links to the European populist right.

In addition to promoting right-wing populism in America, Bannon has links to right-wing populist parties in Europe. He invited Marion Le Pen, a rising star in the French far-right National Front party, to work with Trump. National Front leaders once espoused anti-Semitism, but when Marine Le Pen — Marion’s aunt — became its leader, she made an effort to rid the party of its anti-Semites, including her father, the party’s founder. Now the National Front focuses on opposing immigration and the European Union.

In addition, Bannon has links to Nigel Farage, the former leader of the UK Independence Party, a far-right party in Britain. Farage was Bannon’s guest at the 2015 Conservative Political Action Conference, a premier American conservative confab.

Just because Bannon will be advising the next Republican president doesn’t mean all Republicans like him.

“I don’t know where that comes from. That’s not the Steve Bannon that I know,” Preibus said. “I have sat with him for months. I have never, ever, at one time, experienced that.”

Be the first to comment on "Trump’s chief strategist: 5 things Jews need to know about Stephen Bannon"