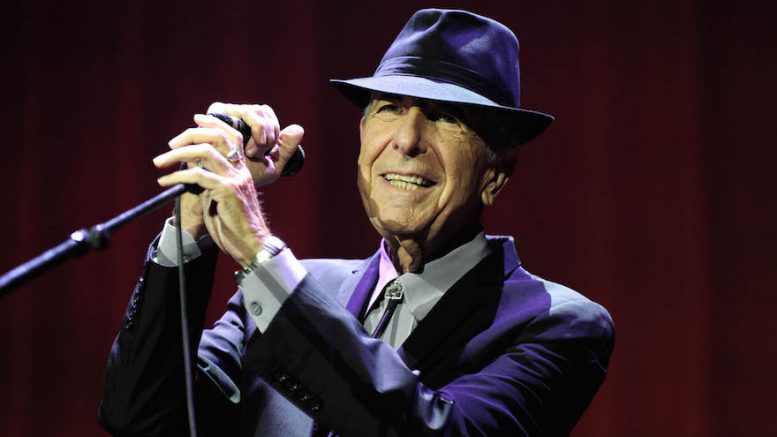 (JTA) — Leonard Cohen, the Canadian singer-songwriter whose Jewish-infused work became a soundtrack for melancholy, has died. He was 82.

“It is with profound sorrow we report that legendary poet, songwriter and artist Leonard Cohen has passed away,” his Facebook page said late Thursday. “We have lost one of music’s most revered and prolific visionaries.”

It did not give a cause of death but said there would be a funeral in Los Angeles in coming days.

Cohen, a Montreal native born in 1934, was playing folk guitar by the time he was 15, when he learned the resistance song “The Partisan” while working at a camp from an older friend.

“We sang together every morning, going through ‘The People’s Song Book’ from cover to cover,” he recalled in his first “Best Of” compilation in 1975. “I developed the curious notion that the Nazis were overthrown by music.”

As a student at McGill University, he became part of Montreal’s burgeoning alternative art scene, one bursting with nervous energy at a time that tensions between Quebec’s French and English speakers were coming to the fore.

His influences included Irving Layton, the seminal Canadian Jewish poet who taught at McGill and, like Cohen, grappled with the tensions between the secular world and the temptations of faith.

Cohen began to publish poetry and then novels, and was noticed by the national Canadian press. Moving to New York in the late 1960s — his song “Chelsea Hotel” is about his stay and that notorious refuge for the inspired, the insane and the indigent — he began to put his words to music.

“Suzanne,” about the devastating platonic affair with a friend’s wife that was a factor in his leaving Montreal, was recorded by Judy Collins and became a hit, launching his career.

Cohen sang in his limited bass and wrote his songs so he could sing them. They would have been dirges but for their surprising lyrical turns and reckoning with joy in unexpected places.

In “Bird on the Wire,” one of his most covered songs, he recovers from a crippling guilt when he finds inspiration in a beggar, and then in a prostitute: “And a pretty woman, leaning in her darkened door/ She cried to me, ‘Hey why not ask for more?’”

Cohen embraced Buddhism but never stopped saying he was Jewish. His music more often than not dealt directly not just with his faith but with his Jewish people’s story.

His most famous song, covered hundreds of times, is “Hallelujah” – he has said its unpublished verses are endless, but in its recorded version is about the sacred anguish felt by King David as he contemplates the beauty of the forbidden Bathsheba.

Cohen’s version, released in 1984, did well in Europe (in a video on German TV he is backed by a children’s choir hiding behind a faux Greek set). John Cale recorded a piano-driven version for a Cohen tribute album in 1991. Jeff Buckley heard that version and used it as the basis for his own six-minute cover, reinterpreting on his guitar the arpeggios Cale had used to accompany the song.

Running longer than six minutes, Buckley’s version became the go-to song in the late 1990s for extended TV show montages depicting trauma and melancholy. Cale’s version was used in “Shrek” in 2001, and that did it: The song became inevitable.

“First We Take Manhattan,” recorded in the late 1980s when Cohen was living much of his time in Europe, plumbs the anger of a modern Jew traveling through a postwar consumerist Europe that has become adept at ignoring its Jewish ghosts:

I love your body and your spirit and your clothes
But you see that line there moving through the station?
I told you, I told you, told you, I was one of those.

Cohen was droll, but also reverent: Each of his explanations of his songs on 1975’s “Best Of” is sardonic except for one, for “Who by Fire.”

“This is based on a prayer recited on the Day of Atonement,” was all he wrote.

Cohen, in his 70s in the late 2000s, again began to tour and record; a manager had bilked him of much of his fortune. He released his final album, “You Want It Darker,” last month.

He often toured Israel, and he expressed his love for the country — Cohen toured for troops in the 1973 Yom Kippur War — but he also expressed sadness at the militarism he encountered there. Under pressure from the boycott Israel movement to cancel a 2009 concert, he instead donated its  proceeds — much needed by him — to a group that advances dialogue between Palestinians and Jews.

Tickets to the stadium at Ramat Gan sold out in minutes. His Israeli fans embraced him that September night, and he returned the love, sprinkling the concert with Hebrew and readings from scripture and ending it with the priestly blessing.

In August he wrote an emotional letter to his former girlfriend and muse Marianne Ihlen, who died in late July, suggesting he, too, was ready to embrace his death.

Last month, in a profile of Cohen in The New Yorker, Bob Dylan compared his fellow singer-songwriter to Irving Berlin — linking three iconic Jewish musicians in one poignant assessment.

Cohen is survived by a son and a daughter.

Be the first to comment on "Leonard Cohen, whose Jewish-infused poetry and songs inspired generations, is dead at 82"