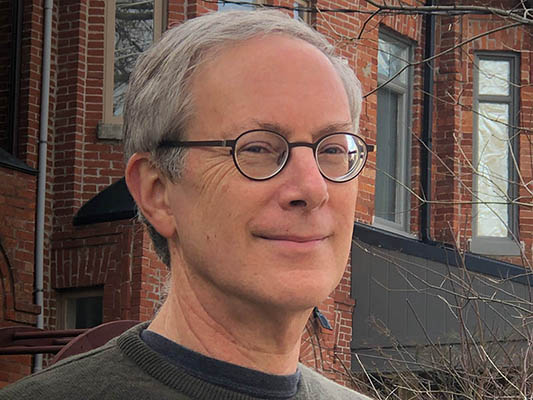 Harvard Professor Derek Penslar delivered a fascinating address on Theodore Hertzl as part of Jewish Studies Week at the University of Alberta.

(AJNews) – This year’s Tova Yedlin Lecture, part of the University of Alberta Jewish Studies Week at the Wirth Institute for Austrian and Central European Studies, was given by noted scholar Dr. Derek J. Penslar, of Harvard University. Penslar holds Harvard’s prestigious distinction as the William Lee Frost Professor of Jewish History, he is the President of the American Academy of Jewish Research, Fellow of the Royal Society of Canada, and an Honorary Fellow at Saint Anne’s College at Oxford University.

His recent Tova Yedlin Lecture presentation via Zoom, a not to be missed finale to the Jewish Studies Week lineup, “Theodor Herzl: A Biography for our time” summarized the major themes and discussions from his newest book: Theodor Herzl: A Charismatic Leader (2020). The book, released in early March 2022 in German translation, has been turning heads and presents a much-needed critical examination of one of contemporary Jewish history’s most mythologized figures.

“Herzl’s charisma depended on the needs and desires of his followers. A leader, especially of a grass-roots movement like early Zionism, is dependent upon his following for legitimacy. Charismatic leadership is therefore dialogic – a constant interaction between leader and followers,” commented Penslar in a recent interview.  Perhaps it is this very relationship between this leader and his followers that has led to the challenging of the moniker ‘Father of Zionism’ – a title Penslar has examined with great fastidiousness.

The obstacles of COVID have changed the landscape of academic public discourse.  Disseminating one’s research is no longer a matter of out-of-town conference mingling, but technically choreographed meetings in virtual spaces. This trend has been met with harsh criticism from the academic community but has presented the indisputable benefit of allowing more accessible engagement and scholarly community building on a global scale. Across professional disciplines Zoom meetings have become routine, and academia is certainly no exception. Despite this acclimation to the virtual platform, Penslar’s talk was certainly one that would have been a sensational in-person event.

The lecture was dynamic, relevant, and pushed the envelope, scrutinizing shared preconceptions.  Anyone who has visited Jerusalem has made the pilgrimage to Herzl’s final resting place – Mount Herzl. Hertzl’s biography, as Penslar’s findings attest, has been mythologized by decades of memorialization, and seldom re-examined.

“Herzl was a troubled, complicated man. Rather than yield to his inner demons, Herzl drove them away by committing himself to a grand and seemingly impossible cause. Had Herzl been a placid soul, he almost certainly would not have become a great leader,” explained Penslar.

Theodor Herzl is a name known in any Jewish household; but how much is really known about the man himself? Like so many stories, those chronicling Herzl’s life and legacy have been passed down over more than a century, often after consultation with second-hand biographical material rather than original documentation. Penslar’s initial research of Herzl’s biography took into consideration the sheer volume of scholarship available but endeavoured to pursue an examination that would celebrate the figure based on facts and hard-evidence gathered through an unforgiving objective lens. The archival hunting that went into this project spanned several continents, and unequivocally illustrated an intensely nuanced knowledge of all things Herzl.

Penslar commented on the inception of his investigative journey stating: “I was approached by the editors of the Jewish Lives series at Yale University Press. They wanted a biography of Herzl in their series and asked me to do it. I figured that given how many books had already been written on Herzl, it would be easy enough to read what’s out there and synthesize it into a book. But once I got into the sources – Herzl’s journalism, political writings, and correspondence, as well as the writings of his colleagues and contemporaries – I realized that a lot was missing from other biographies. Some biographers mythologized him, and others were so busy deconstructing him that they missed the secrets of his greatness. Some did not know Hebrew or Yiddish and could not trace the impact Herzl had on the Jewish public. Last but not least, I wanted to write a biography that conveyed Herzl’s enormous energy, his audacity, and his troubled yet noble soul.”

It was this “troubled yet noble soul” that Penslar’s talk brought into vivid focus. He described Herzl’s relationship with his wife, noting that despite their attraction to one another they were as suited to be partners as “chalk and cheese.” The lecture revealed Herzl’s lifelong battle with mental health issues noting that had he lived in modern society, there would have been a much more sympathetic understanding of his struggle.

“We have a natural need for heroes.  But idealizing a person, transforming her/him into a tissue of myth, deprives us of understanding the deeply human qualities, the flaws and failings, that often lie at the source of greatness.”

In past years there has been a move to de-mythologize heroic historical figures within the societal consciousness, not to detract from their significant achievements, but to appreciate their contributions more authentically. Like the efforts of Nobuki Sugihara to shed light on his Righteous Among Nations recipient father, Chiune Sugihara’s widely celebrated narrative, Penslar took on a monumental task of exploring the multifaceted identity of one of Jewish society’s most beloved figures with a nuanced approach.

“Historians tell stories.  Sometimes those stories are told in a complicated way accessible to only other scholars, just as scholars’ fields like medicine or physics communicate with each other via specialized language. But historians can also tell their stories in a way that engages broad audiences. Biography is a perfect medium for reaching out to the general public. In a biography, the details of a person’s life – the struggles, the triumphs, and tragedies – are intertwined with the political, economic, and social context of an era. It is enormously rewarding to write for the public and to show that academia is not separated from the world, but is rather an essential part of it,” Penslar elaborated.

Securing Dr. Penslar as this year’s Tova Yedlin Lecture presenter created a great deal of excitement and anticipation throughout the academic circuit and Jewish community – he did not disappoint!

“Herzl was a leader that came when his people needed him most,” said Penslar during his lecture.  If anything, attendees did not come away feeling disillusioned about Herzl, but with a sense of the legend humanized – and thus gaining greater appreciation for the man and his place in history.

Penslar concluded his interview comments noting: “A biographer of Herzl needs to not only delve into only the sources from Herzl’s life but also immerse into the world of fin de siècle Europe and the Middle East. I am grateful for the decades I have spent teaching world as well as Jewish history so that I could fit Herzl’s story into that of the international community of his day.”

If his lecture was any indication, Penslar’s book promises to be just as fascinating, intriguing, and revealing. Perhaps at a future date, when the Tova Yedlin Lecture can once again be delivered in-person, Penslar will be invited to speak again so that the academic and Jewish communities can meet the man who captivated their attention by revealing the many layers of a historical icon so well known to all.