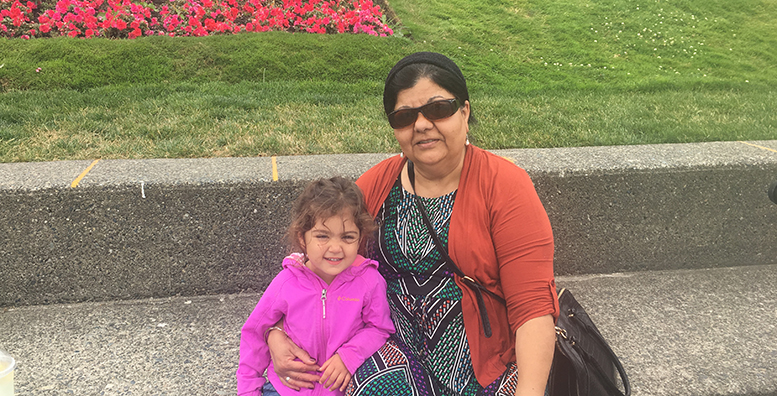 (AJNews) – As Edmonton’s premier religious Jewish day-school closes its doors, sending its final class of graduates out into the world, there is much to lament, but also to celebrate. Menorah Academy families are taking the opportunity to share all the good memories accumulated over the past decades. But perhaps there is no one with a longer memory for Menorah Academy than its Office Manager, Sylvia Benjamin. “Look,” she would often say to Vice-Principal Michelle Smith holding up a paper clip, “I’ve been here since the very first paper clip.” 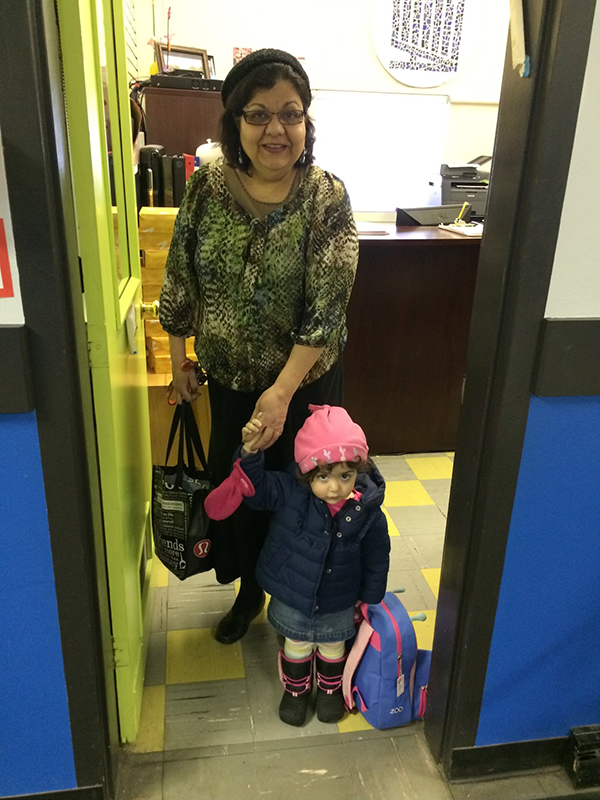 Sylvia Benjamin and her granddaughter Zoe (as a toddler) at Menorah Academy.

During a month hiatus from her job at the former Jewish Community Center, Sylvia was recruited to approach families in the community to stir up interest in a new religious Jewish school. “They sat me down in the Triple Five office with the Edmonton Jewish phone book, and I started dialling,” she recalled in a recent phone interview. “By the time I was finished, we had around one hundred families sign their kids up for Menorah Academy.”

The school started out in an open space of the West Edmonton Mall with dividers to create working classroom environments.  “Mr. Ghermezian asked me to stay on,” Sylvia explained with an audible smile. “So, I left the job I had been doing, and started at Menorah.” The rest is history!

“My role was in the office, but it was everything, and I was one person; ordering books, payroll, keeping track of teachers.”  When asked what inspired her to make such a big change, Sylvia revealed a fascinating personal history.

“Education was always very important in my family. I grew up in India; we are Jews from India, and my great-grandfather founded the first Jewish school in the country.”

Named for Sir Elly Kadoorie, the school still stands, and operates today. “Because education has always been so valued in my family, I felt the need to be a part of Menorah.” Her passion for education coloured a long successful career at the school.

Sylvia’s own two children attended Menorah Academy. “It was so important that we could give our children the best of religious and secular education. It is so important for kids to know the history and the religious part that we parents cannot always give. I can see, even now, how what they learned here influences their lives.”

Recent Menorah Academy graduate Moshe Pesin (class of 2021) commented: “Sylvia was affectionately known as the mother of Menorah Academy due to the warmth and care that she showed towards every single person.”

Since the early days Sylvia’s responsibilities at the school have only grown. She herself described it saying: “I wear many hats.  If the cook was sick, I’d be in the kitchen preparing meals for the kids,” she mused playfully.

“If there is a need, Sylvia knows how to fix it,” explained Vice-Principal Smith. “You’ll never hear her say that it can’t be done.” From nursing booboos to liaising with parents and teachers, Sylvia Benjamin does it all. “She makes sure that we are all able to do what we need to, to make this a successful place.”

Smith, who has worked alongside Sylvia for six years explained, “She’s our frontline – the first person everyone speaks to. And she is such a good listener; she always knows when to listen, and when to offer advice – and her advice is gold.” Perhaps Sylvia Benjamin should count ‘unofficial school counselor’ among her many other roles.

Sylvia is not yet sure what is in store for her after the Menorah Academy chapter closes, but she is adamant that: “I don’t just want a job. I need to be doing something meaningful that I really care about.”

Over the years she has been able to celebrate her past students’ life milestones and applaud their successes from the sidelines. “I’ve been invited to many weddings and brit milahs.  I haven’t always been able to go, but I do get pictures,” she said happily.

There has not been a single person to pass through Menorah Academy who has not been impacted by Sylvia Benjamin’s kindness. Her passion for education has contributed more to the school than anyone is able to adequately express.

“We have always been like one big family here. When somebody needs something we all do what we can to support them – religious, or more secular, we all take care of each other.”

As the big family disbands, Sylvia is collecting phone numbers and email addresses so she can keep in touch with everyone; even when Menorah Academy closes, she will still be the den-mother of the school, looking after all those who passed through her office.

Be the first to comment on "Todah Rabah, Sylvia Benjamin and Menorah Academy"