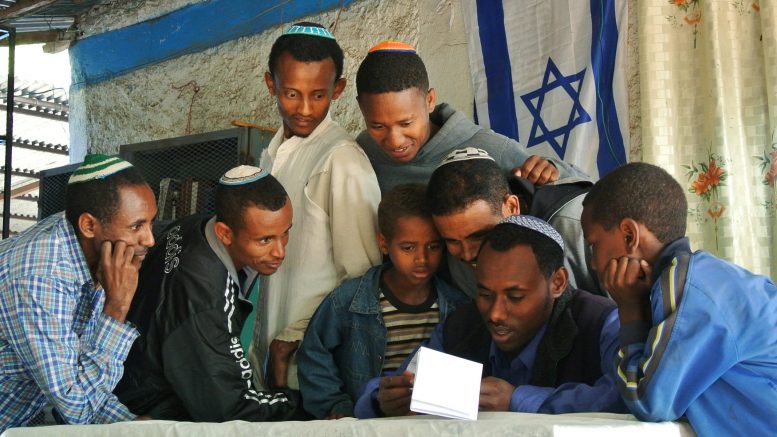 Ethiopian Jews gather at a makeshift synagogue in Gondar, Ethiopia, to see if they have been given a date to move to Israel on November 19, 2012. There are about 2,000 Jews in Ethiopia, after about 35,000 were airlifted out of the country in the 1980s and 1990s. The remaining 2000 are hoping to move to Israel in the next year and a half. Ethiopia’s Jews, called the Falash Mura, practice a unique strain of Judaism rooted in Christianity. AFP PHOTO/JENNY VAUGHAN (Photo credit should read JENNY VAUGHAN/AFP via Getty Images)

By Marc L. Dollinger, SAN RAFAEL, Calif. (JTA) — Two summers ago, I published an academic book about blacks and Jews that did not include a single black Jew in the narrative. Ilana Kaufman, founder and president of the Jews of Color Field Building Initiative, encouraged me to open my eyes to my own implicit assumptions about Jews, race, power and privilege.

Specifically, she asked me to walk through each chapter of the book and rethink its thesis through the eyes of a black Jew. Instead of viewing history through the lens of defining “Americanism” (i.e. what makes us Jewish vs. what makes us American), she suggested viewing those same historical events through a racial lens.

When I took her advice, the very foundations of my argument gave way to a much more complex, nuanced and accurate analysis of American Jews and race relations.

Fortunately, I was able to add an epilogue that acknowledged the absence of black Jews in my book and the need for new academic work, and have joined Kaufman in a series of talks that engage with these questions. But my colleagues in the field and I have a lot of work ahead of us if we hope to accurately tell the story of diverse Jews.

In an article recently excerpted from a forthcoming chapter in the next American Jewish Year Book, scholars Ira Sheskin and Arnold Dashefsky took issue with a May 2019 demographic report that concluded “at least 12-15%” of the nation’s Jews identify as Jews of color — “broadly, anyone who identified as non-white.” Instead, Sheskin and Dashefsky argue, the number stands closer to 6%.

Reading the article, I winced, reflecting on my own continual learning as a scholar of Jews and race. In both content and context, the article typified the very problems it seeks to redress: the erasure of Jews of color in American Jewish life.

When Kaufman challenged my racial assumptions about Jews, I also initially responded with data rather than empathy and deep understanding. Black Jews represented a microscopic number of Jews in the civil rights era, I reasoned. Therefore, minimizing them, making them “invisible” to play on the title of Ralph Ellison’s famed 1952 novel, made perfect academic sense.

Sheskin and Dashefsy’s analysis cuts the number of Jews of color in half, taking the 6% figure from the 2013 Pew “A Portrait of Jewish Americans” study and citing local studies as supporting evidence.

In doing so, they ignore the 11.2% finding of the American Jewish Population Project. And they rely in part on local studies comprised of questions that assume Jewish whiteness.

I am not surprised to read that traditional Jewish community surveys undercount, or worse did not even count, diverse Jews. This is precisely why we need new approaches to Jewish social science. We need new and better questions. We need the very sort of work that Stanford University’s Ari Kelman and his team undertook as they sought a more accurate count of Jews of color last year, which Kelman further elaborated upon in response to Sheskin and Dashefsky.

While Kelman has already addressed the methodological issues at stake, I am interested in the social implications of counting and miscounting Jews of color. Numbers are more than just a way to count. They are also a way to express our values or devalue others. Through flawed questions, we dehumanize Jews of color.

The existence of even a single black Jew, for example, challenges some of our most basic assumptions of postwar American Jewish life. How do Jews who are also black fit into our narrative of black-Jewish relations?

To center Jews of color in history demands that scholars ask important new questions: What if the Jewish history of the civil rights movement reflected white racial privilege more than a manifestation of tikkun olam? How must we rewrite our entire understanding of the civil rights era, and beyond, now that we recognize the existence and experiences of Jews of color?

The decision to publish this piece in eJewishPhilanthropy also matters. Its readership comprises (predominately white) Jewish funders, the very people who must be convinced of the importance of changing our assumptions in order for the ongoing work of prioritizing Jews of color to continue. When two senior Jewish studies scholars dismiss those who claim we need to do a better job of counting diverse Jews and minimize their numbers, it can send a message: Treat donor requests from Jews of color with greater skepticism — they are fewer than you imagined.

The result? Jews of color, yet again, are forced to prove they are not lying about their numbers, that they are vital and that they deserve philanthropic support. To watch is to bear witness to a hierarchy of charitable giving based on race.

This is much less a critique of Sheskin and Dashefsky than it is a call for a much broader and deeper awareness of demography’s racial implications. While these two scholars base their analysis on the field’s most reliable surveys, statistical analysis does not exist in a social vacuum. Who we count, how we count and where we report our counting matters in an ever-more diverse American Jewish community.

Those of us in senior scholar positions, and especially those of us who enjoy the privilege of our white Ashkenazi roots, need to pause before entering this fray.

We need to open ourselves up to the possibility that our otherwise solid academic work plays out differently in the real world than we initially imagined. When we write about numbers, we are writing about people. And when our writing causes even unintended harm, we need to rethink our assumptions.

Be the first to comment on "To accurately count Jews of color, we need to radically change our assumptions about Jews"