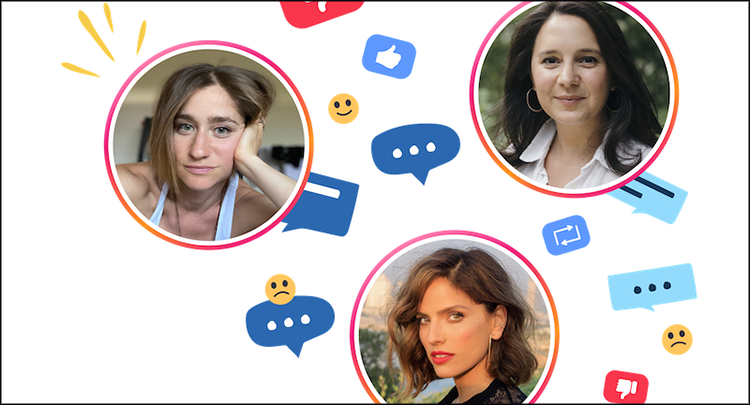 On November 3, Eve Barlow, Noa Tishby and Bari Weiss were featured at an FSWC online event titled "State of the Union: Fighting back against hate."

(AJNews) – Albertans who joined the Friends of Simon Wiesenthal Center for Holocaust Studies (FSWC) State of the Union: Fighting Back Against Hate online conversation on November 3 encountered three remarkable women who are in the front lines in the war against antisemitism and antizionism.

Armed with Jewish pride, Eve Barlow, Noa Tishby and Bari Weiss are hunkered down for what they say is a long fight. And they are urging the organized Jewish community to be more proactive and less reactive when responding to the world’s oldest hatred and its virulent spread on social media platforms, where popularity trumps facts.

The trio is not surprised that antisemitism has found a fertile environment on Twitter and other digital platforms. And they rue the fact that Israel’s detractors are abetted by some in the Jewish community who—due to trauma and the need for acceptance—cast their lot with “woke” progressives.

Barlow, Tishby and Weiss know first-hand the effects of the mob mentality Jews are up against worldwide. Weiss, the author of How to Fight Antisemitism, was so bullied by colleagues at the New York Times for her pro-Israel stance, that she resigned her position there. Barlow, a Scottish-born LA-based popular culture writer was “ratioed” on Twitter following sophomoric personal attacks by actor Seth Rogen.

While Barlow said she takes personal attacks with a grain of salt, she characterizes the online onslaught as “extremely real” and “growing all the time.”

“It’s been an incredible space for any conspiracy theory to fester and grow….It has contributed vastly to the amount of physical violence that happens offline,” Barlow said.

“There is a world-wide war on facts,” noted Tishby—an LA-based Israeli-American author, actress and award-winning producer—who urges community members to dig in for what she sees as a long battle.

It is important not to get “triggered” by Israel’s detractors and for Jews to get “comfortable with uncomfortable opinions,” Tishby said.

“They’re more powerful in certain ways than the government,” Weiss said, adding that the group-think at many of these companies includes the belief that Zionism is racism.

Weiss nevertheless urges the community to resist calls for censorship, a proposition that could eventually lead to the silencing of Zionist voices.

Tishby says that online attacks targeting Israel and the Jewish people are part of a concerted, well-funded twenty-year old campaign against Israel that began at the infamous Durban Conference where Israel was proclaimed an “apartheid state.”

She characterizes this well-planned delegitimization of Israel as a “slow-moving terrorist attack” in which Israel’s detractors have infiltrated unions and gay rights and women’s organizations with the specific intent of dismantling the Jewish state.

Jews active in gay rights and women’s movements were among those who first found themselves “in the teeth” of ideology that shames and isolates those supporting Israel’s right to exist, noted Weiss.

Barlow described it as a “bosom of discomfort,” adding “That alarm went off for us years ago.”

While she and her co-panelists have paid price for their views—losing both friends and opportunities— they eschew victimhood and acknowledge that Jews have at other times in history paid a much higher price for maintaining their distinct identity and their support for Jewish self-determination in Israel.

Weiss cautioned the community against becoming engaged in a constant game of “whack-a-mole” with detractors.

“Every hour of every day there is another outrage we could be combatting, and the more that you combat it, the more it comes up again,” Weiss said. “We need to think a lot more deeply about what is the best use of people’s time.”

Weiss urged the community to rethink a “fundamentally defensive, reactionary posture” and instead to ask “How are we going to fight antisemitism in a way that actually . . . nurtures us a community.”

Antisemitism and antizionism have “. . . become part of this humanitarian umbrella of causes that people proudly wear as a badge, and it’s part of the menu,” said Barlow.

“We’ve been pushed off the social spaces where this conversation is being had, and it is being had without challenge,” Barlow added.

Tishby, author of Israel: a Simple Guide to the Most Misunderstood Country on Earth, said the situation will not be solved by more tweets or by Hollywood celebrities (though she did describe how supermodel Bella Hadid—who has triple the number of Twitter followers as there are Jews on this planet—has proved influential in her online vilification of Israel).

“The Jews throughout history have had a tendency to not ruffle feathers. It just doesn’t work,” warned Tishby.

“There’s never been a clearer time to be courageous in your own independence and to speak freely,” Barlow stated.

Correcting the false narratives so easily spawned on social media will be a tough task, but it is “just the tip of the iceberg,” Tishby said.

“We need to be forcing social media platforms to have a more widespread, educational, engaging breadth of resources that can actually speak to these matters in an intelligent, truthful, historically rooted academic sense.” Barlow said.

Weiss, who speaks to many young Jewish audiences, urges against self-abnegation and self-censorship, instead encouraging co-religionists to wear their Judaism and Zionism as “a badge of honour.”

“The mere fact of doing that is radical and contagious and changes the whole conversation,” Weiss said.

“I do think that now more than ever, we need to instill a sense of Jewish pride among ourselves and in a global sense,” Barlow said.

That effort is damaged when some Jews abet antisemitic and antizionist rhetoric.

“It’s the most damaging of all because . . . it is koshering antisemitism,” said Barlow. “They are feeding into the power of those who are being racist toward them and oppressing them, and they are strengthening the antisemitism that we see in those progressive spaces.”

Weiss urges empathy for the choice being forced on young progressive Jews who are pressured to disavow Israel in order to be counted among the “good.” That pressure has been applied to the Jewish people continuously, dating back to the Hellenists, Weiss noted.

Tishby believes that a “breakdown in Jewish education” is part of the problem.

“When the Seth Rogens of the world are not given historical context to what has actually happened, they arrive on campus and think we lied about everything else.”

“We wanted to brush away…and not discuss the issues,” Tishby added. “If we do that, we allow the conversation to get confiscated and taken away from us.”

“I think that the Jewish institutions have by and large failed us by not being forthright enough in tackling this,” agreed Barlow.

“The attitude of the [Jewish] institutions seems to have been to try to kowtow to the popular progressives or to try and dhimmi and negotiate by making ourselves smaller to fit into an umbrella society that is taking on a lot of other causes and fights that are not our own,” Barlow added.

Weiss said the Jewish community needs to be “counter-cultural.”

“There is nothing that young people want more right now in this culture than meaning and belonging in their lives,” Weiss added.  “If what we are offering as a Jewish community is a pale shadow of what’s going on out there, you’d better believe they are going to win.  We need to offer something completely different.”

Barlow says some young Jews are making inroads, including Ben M. Freeman. Fortuitously, the Hong Kong-based educator and author of Jewish Pride: Rebuilding a People will be speaking to Albertans on January 27 in a live virtual program co-sponsored by the Jewish Federations of Calgary and Edmonton and the Calgary and Edmonton public libraries.

Calgary Jewish Federation Holocaust and Human Rights Remembrance and Education co-chairs Marnie Bondar and Dahlia Libin spearheaded Federation’s sponsorship of the FSWC State of the Union event, which enabled an Alberta audience comprising some 140 households to log in free of charge.

“The work is daunting, but you can’t give it up,” said Libin.  “These three women are true to themselves in spite of the challenges.”

“We had wanted to invite each of them to speak in Alberta, but the opportunity to hear the three of them together was amazing,” said Bondar. “We share their values and are so impressed by the strength and support they lend each other.  That is the atmosphere we are trying to build in our community.”

In addition to their work on Calgary’s first-ever fall Holocaust Education Symposium—which has attracted 4,900 Calgary and area Grade 11 students and their teachers—Bondar and Libin have organized an impressive lineup of winter and spring programming beginning on International Holocaust Remembrance Day when they welcome Freeman, whose Jewish pride has been influenced by his embrace of LGBTQ+ pride.

As Bari Weiss observed during the State of the Union program, “Leadership comes from really unlikely places.”

Theodor Herzl was putting up a Christmas tree in his house in Vienna while he was writing The Jewish State,” Weiss said, inviting viewers to expand their thinking by considering just who the next Herzls might be.

“There is a very good chance that they are going to be young and that they come from the periphery of Jewish life,” added Weiss, “so it is very important that we heed those voices.”

Read next month’s issue of AJNews for more on the January 27 live virtual event with Ben M. Freeman and upcoming Holocaust and Human Rights Remembrance and Education programming. For more information, go to www.jewishcalgary.org.