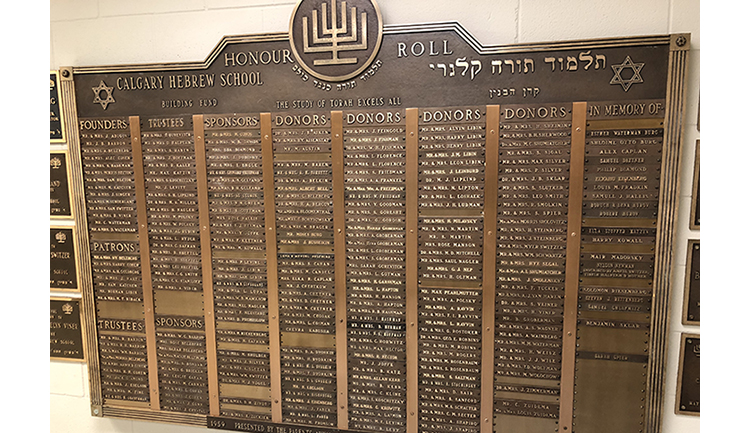 A plaque on display at Calgary Jewish Academy pays tribute to the original donors to the then Calgary Hebrew School. Photo supplied.

(AJNews) – As I walk the halls of the Calgary Jewish Academy, I come upon an Honour Roll adorned with bronze plaques. The plaques date from the year 1959. Part way down the rows of plaques, I find one inscribed with the names of my parents, MR. & MRS. S. SPIER. Unto each plaque there is a story. This is my parents’. 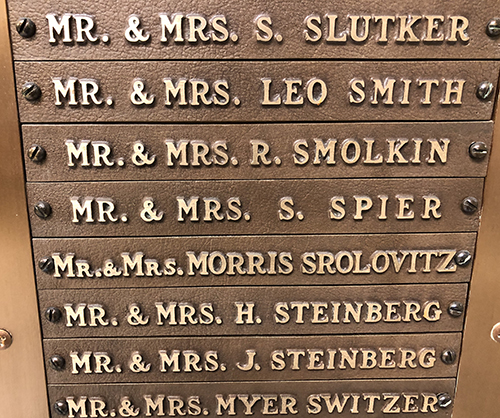 A close-up of the Calgary Hebrew School Honour Roll in tribute to the original donors to the school in 1959.

The 1940s were a challenging time for my parents. They could not yet afford their own home. We lived on the second floor of my bubbe Sarah’s two story wooden frame house on 8th Avenue and 4th Street East. Mom and dad spoke mainly Yiddish at home. I suppose Yiddish was my first language. We kept kosher and were Shabbat observant. Mr. Maitland, who also roomed on the second floor, turned the house lights and the heat on and off on Shabbat. It was then not as challenging to keep kosher as it is today. There were four kosher butcher shops and two kosher Jewish delis in Calgary.

My dad squeaked out a living as the proprietor of a small store called the “The Mirror Confectionary and Souvenir Shop” located on 8th Avenue between Centre Street and 1st Street S.E. The store was a combination tobacco shop, confectionary and tchotchke (small bric-à-brac) seller. There, mom and dad laboured together five days a week. The store was closed on Saturdays for religious reasons and on Sundays by law. The shop was near enough to where we lived so that mom and dad could walk to and from it. Fortunate because dad could not yet afford to buy his first car.

In 1949, the store was severely damaged as the roof collapsed by fire that broke out in the next door restaurant. With difficulty my dad was able to rebuild.

The war years were particularly tragic for mom. While dad’s family were able to escape Europe before the war began, mom’s were not.

In November 1942, the Nazis marched into the small south-eastern Polish village of Pysznica. There, with the help of residents who pointed them out, the Nazis rounded up the Jews. Some, the Nazis took to the surrounding forest where they were shot. They were the lucky ones. The others the Nazis herded into the local synagogue, barred the windows and doors and set the wooden structure afire.

On that day my mother lost both of her parents, all of her brothers, sisters and their children. Mom suffered survivor’s guilt and never really fully recovered from her loss, not from the day she learned the fate of her family until the day her heart stopped in 1989. Mother was not in the Holocaust but she was a victim.

In 1943, at the age of 5, my parents enrolled me in kindergarten both in public school and in the Calgary Hebrew School, the predecessor to the Calgary Jewish Academy. At that time the Hebrew School was a tenant within the House of Israel Building on Centre Street South, between 17th and 18th Avenues, which in those days served as the gathering place for Calgary’s Jewish community. The Calgary Hebrew School, which we called Cheder, was an evening school. Each weekday we went to public school from 9 am until 4 pm with a break for lunch and then followed to Cheder on Mondays through Thursdays from 5 pm until 6.30 pm plus another hour and a half Sunday mornings.

There were 17 kids in my kindergarten class at the Hebrew School who as we progressed through the grades learned the basics of Judaism and the Hebrew language. Somehow I finished grade 6. Of those 17 in my 1943 kindergarten class, some have moved away, some have sadly passed on and some, Mel, Jerry, Harriet, remain my good friends to this day.

In 1954, the Calgary Hebrew School commenced functioning as a fully integrated elementary day school teaching a dual program; an enriched Alberta curriculum plus Judaic and Hebrew language studies. Junior High was added in 1968.

In 1959 the school moved to its present location off Glenmore Trail. To purchase the land and build the school thereon was a large and burdensome undertaking for Calgary’s Jewish community which then numbered less than 3,000. The names of those who recognized the importance of Jewish education and participated were enshrined upon the Honour Roll that now sits on the wall in the Calgary Jewish Academy.

I graduated grade 12 from public high school in 1956. By that time Dad’s finances had somewhat improved. We were living in our own home. Dad had purchased a lot from the City of Calgary in lower Mount Royal for $600 upon which he had built a 2 bedroom bungalow with a couple of extra rooms in the basement. That bungalow no longer exists. The property was sold after both my parents passed away. The new owner immediately demolished our house to make way for the brick mansion that presently sits on the site. At one time Alberta’s former premier Peter Lougheed owned the property. I often joke that Peter Lougheed used to live in the Spier mansion.

Dad had also purchased his first car. As I had a driver’s license I got to drive the car. In those days you did not need to take a driver’s test to obtain a license. All you needed was to attain the age of 16.

About going on to university, I was ambivalent thinking I might prefer to become a merchant like Dad. After all, I had introduced to the store Dick Tracy wrist radios, a device that could detect radio waves with only a crystalline mineral and an antenna. They sold like hot cakes. The only problem was none worked and all were returned to the store by the purchasers.

My parents quickly squashed my notion and off I went to university in Edmonton. No university then existed in Calgary.

Six years later in 1962 I returned to Calgary with a wife and a law degree. Sondra and I had met a few years earlier when we both had summer jobs working as counsellors at Camp B’nai Brith in Pine Lake. This year we celebrated our 60th wedding anniversary.

As for mom and dad’s store, it was one of the properties expropriated by the City of Calgary in the early 1970s to make way for construction of the Glenbow Museum.

In 1979 our son Brad graduated from grade 9 at the Calgary Hebrew School and our daughter Leanne followed 3 years later. While our children were in the School, I served on its Board of Directors and then took on the role as President.

In 1987, the Calgary Hebrew School and Calgary’s other Jewish day school, the I.L. Peretz School amalgamated to form the Calgary Jewish Academy (CJA for short).

In the spring of 2020, Sondra and I attended, under Covid restrictions, our granddaughter Zoey’s grade 9 CJA graduation exercises. Zoey is the third generation of our family to have attended the Calgary Jewish Academy or its predecessor the Calgary Hebrew School.

My parents would be so proud to know what they to their capability helped build in 1959, now, some 62 years later, still stands. It thrives, an institution of academic excellence teaching a full dual curriculum and instilling in their students a strong sense of their Jewish heritage and tradition making Judaism culturally and socially relevant to them in this the 21st century.

A while ago I read Alan Dershowitz’s 1997 book “The Vanishing American Jew,” the thesis of which is a warning that American Jews are in danger of disappearing and what must be done now to create a renewed sense of Jewish identity for the next century.

Decades before that book was published my parents understood. They had each come from Europe to create a new life in Canada with its open, free and welcoming society where we Jews have never been more secure, more accepted, more affluent. That very success is a consequential threat to our identity as a people. My parents understood that the battle for survival in this land is one for our Jewish identity, our very Jewish soul. And my parents understood that we have a powerful weapon on the front lines of that battle, Jewish education, which in order to endure requires a committed culture of those wishing to sustain and foster it.

And that is why there is a bronze plaque at the Calgary Jewish Academy inscribed with the names of my parents, MR. & MRS. S. SPIER.

Unto each plaque there is a story. This is my parents and it is also mine.

Joe Spier is a Calgary-based retired lawyer and sometime writer with a keen interest in Jewish history.