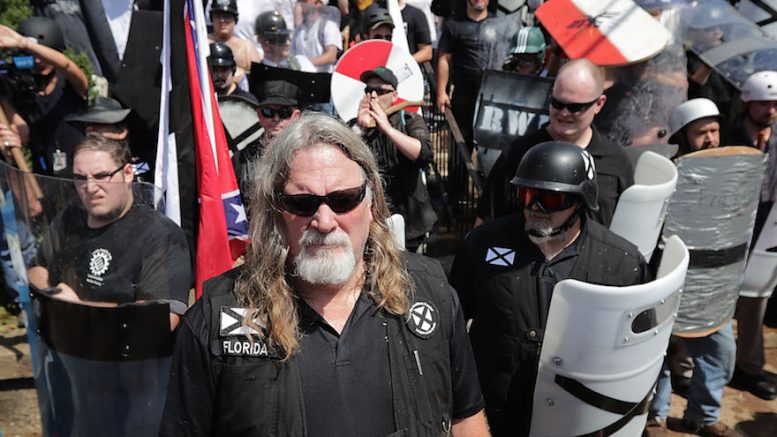 White supremacists exchange insults with counterprotesters as they attempt to guard the entrance to Emancipation Park in Charlottesville, Va., Aug. 12, 2017. (Chip Somodevilla/Getty Images)

(JTA) — The number of active hate groups in the United States is at a record high — and many are anti-Semitic in nature.

That comes from a report released Wednesday February 20, 2019 by the Southern Poverty Law Center saying that 1,020 hate groups were active last year, an increase of about 7 percent from 2017. The number exceeds the record of 1,018 groups in 2011; the Montgomery, Alabama-based civil rights organization started counting hate groups in 1990.

The SPLC found that the number of both white supremacist and black nationalist groups — such as the Nation of Islam and the Black Hebrew Israelites — has increased. Its intelligence project director, Heidi Beirich, told reporters in a phone call that the majority of groups in both categories are anti-Semitic.

However, the number of some types of organizations, including neo-Nazi and Ku Klux Klan chapters, fell last year.

Statements about immigrants and Muslims made by President Donald Trump and commentators on Fox News have helped stoke white nationalist sentiments, the SPLC said.

“The organized hate movement may be showing signs of disappointment with Donald Trump, but the president, aided and abetted by Fox News, continues to push his noxious anti-immigrant and anti-Muslim ideas into the public consciousness — fueling fears of a forthcoming white-minority country,” according to the report.

Since Trump’s election the SPLC has faced — and denied — charges that its research and methods have been compromised by a left-leaning cultural agenda and that it paints some legitimate right-wing groups and critics of Muslim extremism as hate groups.

The SPLC report also said that the anti-Semitic black nationalist groups capitalized on comments by the president in recruiting new members. Beirich said groups had responded to Trump’s statements, such as calling African nations “shithole countries” and deriding NFL players who refused to stand for the national anthem to show solidarity with marginalized people of color.

“These are all things that black hate groups are using to try to draw people to their ranks,” she said in a response to a question by the Jewish Telegraphic Agency. “There are strains of anti-Semitism in the bulk of these groups.”

The report fears that acts of violence such as the attack on Pittsburgh’s Tree of Life Synagogue in October by a white supremacist gunman, Robert Bowers, will rise.

“[T]here are no signs that the violence, which has been all too common over the past two decades, will let up,” it read. “In fact, if the hate movement abandons politics as a solution to demographic change, as recent denunciations of Trump by prominent white supremacists seem to indicate, more angry lone wolves like Bowers may see violence as a solution.”

A report released by the Anti-Defamation League last month found that the vast majority of extremist-related murders in the country were linked to far-right extremism.

Be the first to comment on "There is a record number of hate groups active in the US, civil rights center finds"