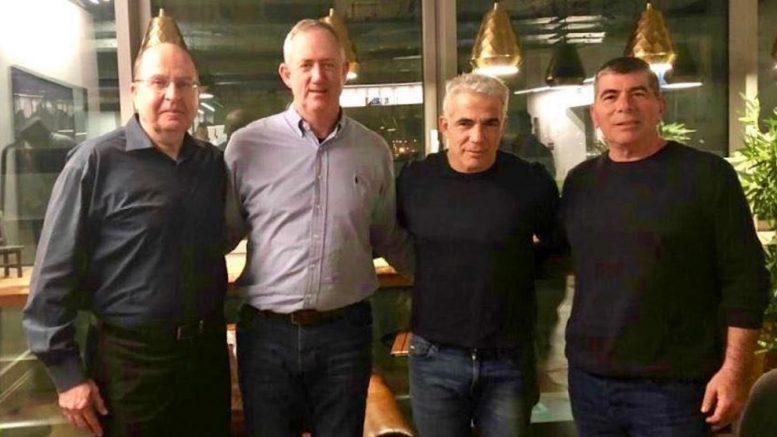 JERUSALEM (JTA) — Benny Gantz took Israel’s political world by storm just weeks ago when he announced the formation of his own Israel Resilience Party. The former general’s party was polling in the high teens, just as Yair Lapid’s Yesh Atid did when his party stormed onto the scene ahead of the 2013 elections.

But neither center-left leader appeared to pose a serious threat to Benjamin Netanyahu, whose right-wing coalition appeared unbeatable.

But in the early hours of Thursday morning Gantz and Lapid dropped a bombshell, and agreed that they would be stronger together than they would be individually. Putting aside rivalries and differences, they announced a new Israeli party along with Moshe “Bogie” Yaalon, like Gantz a former chief of staff of the Israel Defense Forces.

Yaalon’s Telem Party combined with Gantz’s late last month. And to sweeten the pot, another former head of the IDF, Gabi Ashkenazi, announced that he, too, would join the new joint list.

What is the merged party called?

The new party said it would call itself Blue and White, a nod to Israel’s national colors and to the Gantz campaign theme that “Israel comes before everything else.”

How will the merger work?

Who else is in the party?

The list is top-heavy with former generals and light on women. Gantz, Lapid, Yaalon and Ashkenazi are the top four, followed by Labor Federation leader Avi Nissenkorn. The first women, Miki Haimovich and Orna Barbivai, appear in the seventh and 10th spots, respectively. There are eight women in the top 30 spots. (Israelis vote for a party, not an individual, and parties are awarded seats in the Knesset according to their percentage of the vote tally. It’s up to the party who gets the spots available.)

What do they stand for?

“The new ruling party will bring forth a cadre of security and social leaders to ensure Israel’s security and to reconnect its people and heal the divide within Israeli society,” the leaders said in a joint statement. That’s about as close as they got to outlining a platform.

Lapid and Gantz prefer to describe themselves as “neither right nor left.” Gantz has spoken about eventual “disengagement” in the West Bank but insists that education, national infrastructure and security are his top priorities. Yaalon believes that the idea of perpetual Israeli control over the Palestinians is an illusion, but that the Palestinian leadership is not ready to divide the land and there is enough room in the West Bank to settle 1 million or 2 million more settlers. Lapid rose to prominence on a platform of closing Israel’s wide economic gaps and standing up to the Orthodox religious establishment.

The party was scheduled to deliver a more detailed joint statement to the Israeli media on Thursday evening.

Can they beat Netanyahu?

The short answer is maybe. But there has not even been a “maybe” in many years. Polls taken the day before the merger was announced showed a combined Gantz-Lapid slate winning one seat more than Netanyahu’s Likud, and fewer if they run separately. Yesh Atid had been steadily losing seats since Gantz announced his new party, which likely took most of its votes. Once the votes have been counted, the race will be on to form a coalition. Netanyahu will look to his right-wing partners and Gantz-Lapid will turn to the left. It looks like it’s gonna be close.