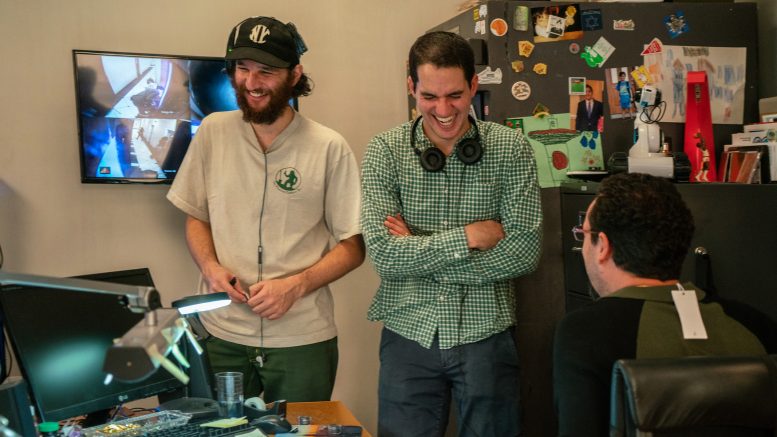 From left, Josh Safdie, Benny Safdie and Adam Sandler on the set of "Uncut Gems." (Wally McGrady/Courtesy of A24)

(JTA) — Fresh off their critically acclaimed film “Uncut Gems,” Jewish brothers Benny and Josh Safdie are making a comedy pilot with the Jewish comedian Nathan Fielder. (Fielder is best known for “Nathan for You,” a Comedy Central show.)

The Showtime series, called “The Curse,” will star Fielder and Benny Safdie, and Deadline reports it “explores how an alleged curse disturbs the relationship of a newly married couple who star in “Flipanthropy,” their troubled HGTV show.” Fielder is set to play the husband and Safdie the producer of the fictional show.

Nathan Fielder-Safdie Brothers Comedy About HGTV is a Mad Libs I did not expect to read today and yet here we are https://t.co/hC6r59oxpt

I simply don’t have room in my body for the love and excitement this has produced in me https://t.co/yXYFhzcEeU

No word on a tentative premiere date.

Be the first to comment on "The Safdie brothers are making a new comedy with Nathan Fielder. Twitter is very excited."