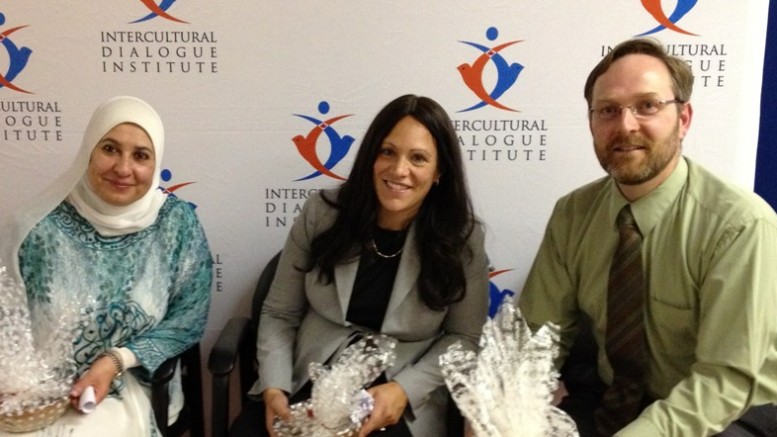 A priest, an imam and a rebbetzin walk into an Iftar…

On Sunday, July 5, the fast of the 17th Tamuz, I was invited to an Iftar.  Iftar is the break-fast held by Muslims each night of Ramadan.  I was tasked with presenting the Jewish view of fasting positioned in between leaders from the Muslim and Christian communities.

Why do adherents of the Abrahamic faiths fast?  In all three religions, fasting is a time of repentance, a time to separate from our physical everyday needs and to connect spiritually to G-d.  To awaken one’s heart, meditate and pray.

Just as intriguing were the differences between the faiths.  There are a few opportunities to fast in the Christian religion, such as Lent forty days before Easter, when one can abstain from food.  However it seems like most would fast from specific foods such as, chocolate, sweets, meat, and abstain as well from certain activities like idle chatter, watching TV and smoking.  Additionally, one can take on an individual fast when one feels the need to have a spiritual cleansing.

The Muslim tradition has the well known month of Ramadan when all Muslims around the world are fasting from day break to sunset every day for the ninth month of their lunar calendar.  They refrain from food, drink, sexual intimacy, smoking, false speech, and fighting.  It is a time of peace, tranquility and giving back to others.   In Edmonton, where the summer days are long, it means waking up at 3am to have a meal, going back to sleep for a couple of hours, going to work and then going to the mosque for prayer followed by an Iftar-breaking of the fast at around 10pm.

When I informed my synagogue of the event, one of my congregants came over to me at the Kiddush and told me about how a colleague of his at work is fasting during Ramadan.  He mentioned that in Edmonton he has to wait unit 10:15pm to break his fast, at which point the Jewish guy tells him, ‘No, you have to wait until 11pm!’  They were arguing back and forth on timing until finally the colleague said, ‘Oh, I’m not that religious, I guess I don’t really know, I just fast until sunset.’  I listened to this story and then turned to my congregant and explained how Judaism requires us to end our fasts at nightfall, while Islam ends their’s at sunset.   I then pondered the exchange: we Jews think we are experts in all areas, we have suddenly now become experts in Sharia Law too!

Why do we fast?   According to Maimonides, fasting is about repentance.  It’s about introspection.  It’s a time to reflect upon our relationship with Hashem.   The SheLaH, Rabbi Isaiah Horowitz (1565-1630) explains that fasting is not about mourning over the past, offering three reasons:

Firstly, we are meant to accept the Divine decree with love, so why should we mourn G-d’s decision?  Secondly, crying over what happened in the past is in vain.  You can’t change the past.  And thirdly, as Chasidim say, there’s only one thing worse than sin, and that’s sadness.  According to our Sages, prophecy only arrives in a state of joy.  And so the purpose of fasting cannot be to arouse a feeling of sadness.  Rather, fasting in Judaism is all about teshuvah (repentance).

As we finished up our discussion that evening, it was amazing to see how men, women, and children of all ages started coming in to break their fast.  Men carrying their sleeping children on shoulders, women coming in with infants, teenagers coming in strides; all coming together to have their late night dinner!  It was moving to watch how they all honored their time of Ramadan.

And then it occurred to me.  Muslims fast for an entire month.  We Jews have only six fasts for the entire year and yet we still kvetch about them each time one comes around and try to figure out how we are going to get through it.  Instead, we should be embracing the opportunities given to us to reflect and meditate and to spiritually reconnect.   We should be looking at our ‘cousins’ with the way they venerate their fasts.   Like the SheLaH teaches: if you cry every time a fast comes around, you’ve missed the point.

I ended my Iftar speech with the famous story of Napoleon.  One day he is walking along the streets of Paris and hears commotion coming from the synagogue.  He enters to find people sitting on the floor, praying and meditating.   He asks what is going on, and they explain that their Temple was destroyed.    He says: no citizen of mine should be treated this way, who are these people who did this to you?  They inform him that it was over 2,000 years ago and they still have never been able to rebuild the Beit Hamikdash.  Napoleon looks at them with tremendous respect and says: a nation that is able to look inside themselves and pray for a Temple lost from long ago is a nation that takes life seriously and will endure forever.

With Tishav B’Av around the corner (July 26), may we merit to appreciate the fasts that were given to us and take them seriously, so that one day those days will become, as our Sages tell us, days of rejoicing in our rebuilt Temple in Yerushalayim!

Batya Ivry-Friedman was born and raised in Brooklyn, NY. She received her Bachelor of Science in Mathematics from BrooklynCollege and her MBA from the University of Alberta. She began her career as a financial analyst in NY before moving to Edmonton with her husband, Rabbi Daniel Friedman, to assume the spiritual leadership of the Beth Israel- The Family Shul Congregation. This article first appeared as a blog at thetimesof israel.com.

Be the first to comment on "The Rebbetzin at the Iftar"