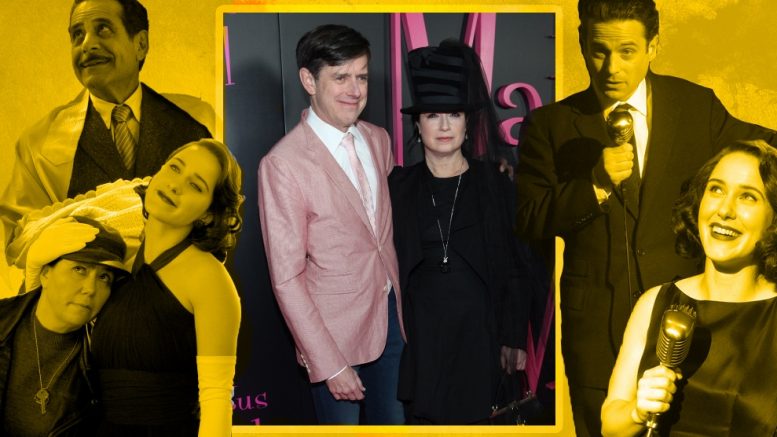 NEW YORK (JTA) — “The Marvelous Mrs. Maisel” didn’t add to its large collection of awards at the Golden Globes this year. But the third season of the celebrated series, now streaming on Amazon Prime, is keeping audiences hooked as it expands the world of Midge Maisel.

It also comes at a time of increasing awareness and discussion about how minorities — especially Jews, during this period of rising anti-Semitism across the U.S. — are portrayed on screen. As one of the most Jewish series currently on television, “Mrs. Maisel” is involved in a lot of these discussions.

“I think what ‘Mrs. Maisel’ does is to draw on the stereotypes while constantly undermining them [by] showing you the complexity of her character,” a professor said to the Los Angeles Times recently.

Amy Sherman-Palladino and Dan Palladino, the married couple behind the show — Sherman-Palladino the creator (who alone has won four Emmys for the series) and her husband, a co-producer and co-writer — spoke on the topic with the Jewish Telegraphic Agency recently, in what was likely their most Jewish interview to date.

JTA: How do you go about making sure the Jewish community feels represented authentically on “Maisel”?

[The Maisels and the Weissmans] are two Jewish success stories in New York, at a time when the world was wide open for them… We just leaned right into it.

It’s such a fundamentally New York Jewish story, but in season three, her world really expands.

Sherman-Palladino: We always have a foot in New York. We will never be a show that will be gone from New York. It’s a New York show, first and foremost. Wherever she goes and travels, her home is New York. It’s just something that now, hopefully, is ingrained in the show; you can’t separate [New York] from what the show is.

When you started, when you pitched the show, did you know it was going to end up where it is now? Did you have a plan that she’s going to go on tour, and all that?

Sherman-Palladino: We had the touchstones for the first three seasons.

Dan Palladino: She’s following a certain path. While she’s had a setback or two of different sizes, she still is going forward — even when she goes backwards. She’s going to brush herself off and figure out a way to move forward again. So it’s a little bit two steps forward, a step back —

Palladino: We try not to set things in stone too much because we have to be open to how the actors are working together and what the dynamics are. When we first started, I don’t know if we really knew how much we were going to spend with Susie and Midge, just the two of them. But, from the very beginning, these two actresses [Alex Borstein and Rachel Brosnahan] — with their very different backgrounds and acting styles — came together and just really gelled together. So, you pick up that we should write more scenes for them.

Some of the discussion around the show now centers on the depiction of Jewish stereotypes. How do you deal with that issue in our hyper-aware culture?

Palladino: We knew that if we show a Jewish family at temple — if we show them and talk about Yom Kippur and all those kinds of things — there are going to be people who are going to nitpick at specifics that maybe we didn’t get exactly right. But we do it all lovingly. A lot of television shows will say “here’s a Jewish family” and you’ll never see them doing anything specifically Jewish.

Sherman-Palladino: They talk about Hanukkah once in a while.

Palladino: Yeah, every once in a while, there will be a mention of Hanukkah, or a Yiddish word spoken. And other than that, they’re Episcopalian! So we’re trying to lean heavily into Jewish practices. We just want to show it, celebrate it, and sometimes laugh about it.

I’m not Jewish, but I married a Jewish woman and I’ve been working with — and have been friends with — Jews all my adult life. I have learned to love the laughter and the joy surrounding the traditions. We don’t hang on the internet a lot because it’s —

Sherman-Palladino: No, we are not on any social media, because we will die.

Palladino:  But a lot of the feedback that we’ve gotten, has been “Thank you. Thank you for leaning into it and showing Jews being Jewish, as opposed to just name checking them as Jewish.”

Sherman-Palladino:  And there are many different kinds of Jews! To say, “oh, Jewish stereotypes,” well, what are you talking about? Because we have an educated Jew, we have a woman who was happy to be a mother, we have another woman striking out as a stand up comic, and, you know, Susie Myerson’s a Jew! We’ve got a broad range of Jews in there.

Like I said, a lot of this is based on my family, or people that I know. I think that anytime you lean into anything, somebody is going to say, “Oh, you’re leaning into the Jewish stereotype.” Or if [we showed] a Chinese family, it’d be like, “Oh, you’re leaning into the Chinese stereotype.” I don’t think you can avoid that — except for doing what a lot of shows did for many years, which is like, “We’re Jewish, but we won’t talk about it, or you won’t see anything about it,” just one girl will have dark curly hair.

Again, it’s a comedy. Jews own this cadence. They made it… Listen to Lenny Bruce, what he talks about. In between all this other stuff, he talks about his mother; he has a whole bit about his mother and he had a tattoo and she says “you can’t be buried in a Jewish cemetery.” And you could say, well, that’s all stereotypical Jews, but no, that’s Jews. Those are Jewish mothers. That’s how they are.  You can’t please everybody. You just can’t. We try to please most of the people, if possible.

[The Jews have] such an amazing story. It’s the story of people who have been ostracized and kicked out and chased from country to country to country and have lived through one of the most horrific, devastating tragedies of all time, and yet, they’re the ones with the jokes. They are the ones who come through with the humor. We should just own that because it’s survival. Comedy and humor and jokes are survival. And if anything, the Jews know how to survive.

How do you decide what Jewish places and moments to include in the show?

Sherman-Palladino: We don’t set out going, “Okay, this year, we’re going to show a bar mitzvah.” But you know, they’ve got children, things come along with that, and you have to follow the traditions and family. It’s all based on life. The reason we [went] to the Catskills is because bringing back parts of vanishing New York is part of our fun. It felt like a cultural moment in time that’s gone. That’s what we wanted to bring back.

That’s why the garment district was so important to show because it was a thriving, bustling [part of Jewish life]. And it was a way for someone like Moishe, who probably didn’t have a lot of education, [and] was just a tough, self-made guy, to build a whole company for himself. It was a place where that was possible.

While Midge’s story is fictional, it’s set in a very real world. And of course, Lenny Bruce is a very real person —

Palladino: He’s based on Lenny Bruce!

Why did you decide to include Lenny as the reality anchor?

Palladino: Talk to any comic today, and everyone will acknowledge that he’s the godfather of today’s comedy. He died for other people’s sins. Not that he didn’t sin but he was —

Sherman-Palladino: Not that he didn’t have a little hand in it.

Palladino: He was a guy trying to point the way to a new way to communicate with an audience. He wasn’t a guy just desperately trying to shock people. He was trying to start a conversation and trying to deal with topics that were, at the time very, very taboo. There’s some of them that are still a little taboo. But he certainly changed the way that a lot of the comedians that everybody loves today are able to speak. And, quite frankly, the language we use on the show may have been generated from Lenny Bruce trying to open doors. If he overstepped the bounds, then that’s what a maverick does: they overstep the bounds and then they often pay the price.

He wasn’t intended to be a big part of the show. He was maybe just going to be in the pilot, if the character didn’t work. But Luke Kirby came in — he’s tall, he’s handsome, all you girls love him. We guys like him too, he’s a cool guy.

I feel like his death is in the back of my mind as I watch, but I don’t know if that’s intentional or not.

Sherman-Palladino: It always will be. I mean, the minute you put Lenny Bruce, you can’t [not think of his death]. And I don’t think that’s a bad thing. Especially not for her, who’s trying to navigate which way is right.

This conversation has been edited and condensed for length and clarity.

Be the first to comment on "The minds behind ‘The Marvelous Mrs. Maisel’ on how they aim to represent Jews on screen"