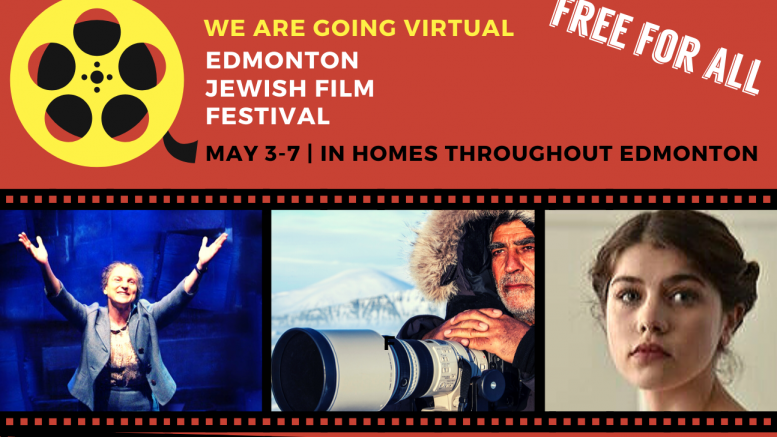 (AJNews) – This year, as in the past, The Edmonton Jewish Film Festival Committee (EJFF) had a grand vision for our Festival.  In mid-February, after several months of screening films, we were excited about our final selection and began the process of pairing films and shorts, seeking sponsorships and planning events.  We had a great lead on the European director of one of our films, who was potentially interested in speaking at the EJFF, in conjunction with a planned trip to the New York opening of his film.  We emailed his agent to confirm the plan and got an unexpected reply, “I cannot confirm anything. Things are bad with COVID-19 in Europe, and he may not be able to get into the US.” That was my first inkling that our vision for the Festival would soon be transformed. 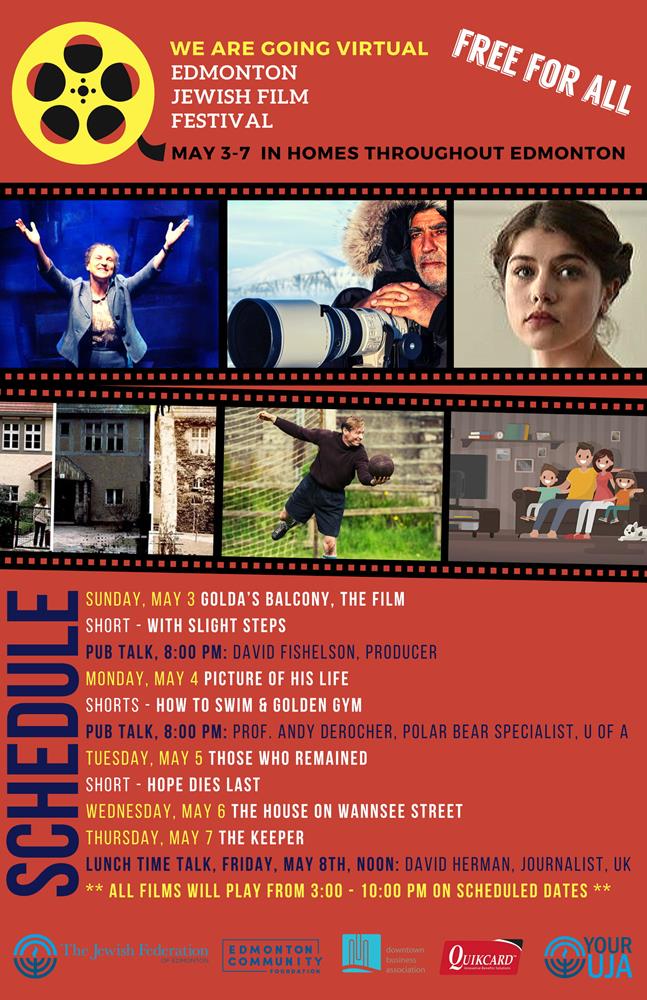 The rest is now a familiar story.  Travel restrictions.  No big gatherings.  And a few short weeks later, the EJFF as we knew it was cancelled.  But film is a very adaptable medium, and Jewish people, not least of all film lovers, are very resourceful. Pretty soon, Jewish film festival organizers from around North America were huddling in Zoom meetings, exchanging ideas about how to deliver our films virtually. Within a few weeks, many new virtual Jewish film festivals were born.  With the help of the EJFF Committee, our sponsors and advertisers, and the distributors who quickly granted us rights for online screenings, we were among the first Jewish film festivals to announce that we would “go virtual.”  And thanks to our generous sponsors, advertisers, and donors, we can offer the festival free to the public for the first time!

So, this year, the Jewish Federation of Edmonton is excited to bring you our carefully selected Jewish films, right in the comfort of your own homes. Though we cannot be together physically, we will be together in spirit, sharing experiences, ideas and conversations virtually.  Our virtual Festival will open on the original date, Sunday, May 3, with Golda’s Balcony, the Film, an engaging and inspirational hybrid of a film and the smash hit, one-woman Broadway play. Viewers will have the rare treat of seeing an exceptional theatrical performance by Tova Feldshuh, combined with a history lesson and total immersion in Zionist pride.  Don’t miss it!  One of the great advantages of a virtual festival is that we have easy access to speakers who are far away.  At 8 pm on May 3, David Fishelson, the play’s producer, a man who lives and breathes the play, the film, and all things Golda, will give a virtual pub talk via Zoom to our audience, from his home in NYC.

The next film, Picture of His Life, is also about an Israeli with a colossal vision, but it is a vision of a very different nature.  The film profiles Amos Nachoum, Israeli nature photographer, and his obsessive quest to swim alongside the great white Canadian polar bear, and shoot a photo. The film is suspenseful and the photography sensational.  With this film, we go local for our speaker, since the expertise is right here in Edmonton.  The U of A Department of Biological Science’s, Professor Andy Derocher will give a Zoom pub talk on his work with polar bears in the Canadian Arctic.

On Tuesday, May 5, we will show the beautiful and troubling Hungarian post-holocaust drama Those Who Remained.  This complex and haunting story of trauma, love and selflessness is a masterpiece!  The following night, we also have a Holocaust-related story, the documentary The House on Wannsee Street, a provocative exploration of themes of exile and identity.  Filmmaker Poli Martinez Kaplun delves into the story of her German Jewish family, who fled the Nazis and decades later, is scattered across Europe and Latin America, largely disconnected from its Jewish roots. Through her interviews with various family members, she unearths very different and sometimes unsettling views of Jewish identity.

We will close with The Keeper.  Based on the true story of a German prisoner of war in England who stays on after the war to become a soccer star, the movie offers something for everyone: period drama, English accents, a handsome leading man and lady and plenty of soccer (football).  Though there are almost no Jewish characters on screen, the film delivers a very important Jewish message of forgiveness and reconciliation.  To explore the film’s historical and social context, we once again take advantage of the virtual format, bringing you a speaker live from England, the very charming and erudite David Herman, a free-lance journalist who has written hundreds of articles about film, art, books and TV in both Britain’s Jewish and mainstream press.  David will be speaking via Zoom at noon on May 8, the day after the film.

The Jewish Federation of Edmonton is very grateful to our sponsors and advertisers who sustained their support as we transformed this festival into a virtual one.  To join us for the Virtual EJFF, you can register at jewishedmonton.org.  The Festival is free to everyone, to bring comfort and community at a difficult time.  Donations, however, are appreciated, and can be made when you register.

Be the first to comment on "The Edmonton Jewish Film Festival Re-envisioned: May 3-7 everyone is welcome"