The Jewish Historical Society of Southern Alberta presents this article from the archives of the JHSSA Journal “Discovery” dated June 2003. It was relevant in 2003 and still of the utmost relevance in these uncertain pandemic times. 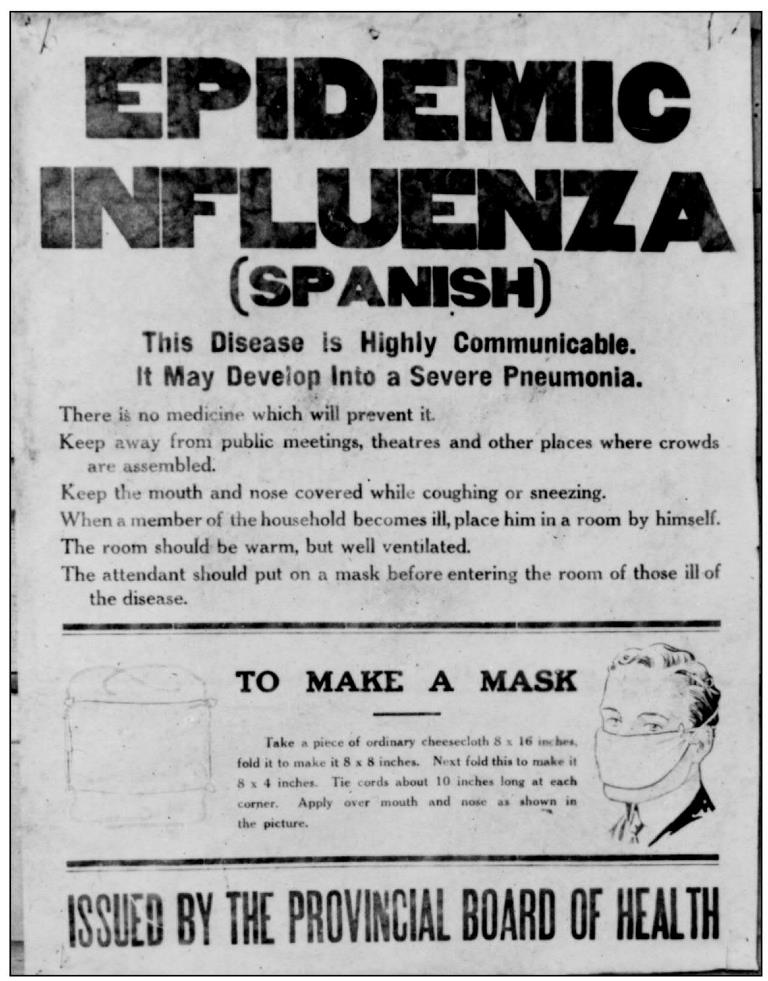 Calgary’s Jewish population of less than 1000 suffered its share of influenza casualties. Eleven Calgary Jews, mainly young adults, died in the worst four months of the epidemic. In one month, between October 19 and November 18, 1918, nine Jewish men and women died. Two more deaths occurred in 1919. (The equivalent fatality rate today would mean 100 Jewish deaths in Calgary.)

As well, six Jewish newborn babies and infants died during the first months of the epidemic. We do not know if they were flu victims; any baby victims would make the Jewish death toll even more startling.

(In comparison, only one Calgary Jewish baby was buried in 1917. Three Jewish adults died in the year before the end of February, 1918. There were no Jewish burials between February and October of 1918.)

The Spanish influenza outbreak (which actually originated in Asia) took a large toll in war-torn Europe through the spring and summer of 1918. Returning soldiers brought the pandemic to North America. On October 2nd, sick soldiers from a westbound train were hospitalized at a camp near Calgary. The disease soon reached the civilian population.

The Calgary Daily Herald described Spanish flu symptoms as chills, high-temperature fever, headache, backache, redness and running of the eyes, and aches and pains throughout the body. The 1918-1919 flu was extremely contagious, and could be spread by breathing, coughing, sneezing, and spitting. There was – and is – no quick cure for influenza; victims took analgesics and a variety of dubious medicines. So many prescriptions for liquor were written that the city’s supply ran dry.

Officials played down the severity of the epidemic, but took steps to contain it. Victims’ homes were quarantined, albeit inconsistently. Gauze face masks were made mandatory, but many failed to wear them. Recreation and entertainment facilities were closed – theaters, pool rooms, roller rinks, sports venues, and the like.

Public meetings, church services, and most social events were forbidden. This was a typical newspaper social notice, on October 23rd: “Owing to the recent order of the Board of Health the Hadassah chapters Daughters of Zion has been obliged to postpone its monthly meeting indefinitely.”

Calgary Zionists canceled a major event which was to celebrate “Declaration Day,” the first anniversary of the Balfour Declaration. (A well-attended October 12 Zionist meeting, at which Nahum Sirkin spoke, was held before restrictions were imposed and should in hindsight have been cancelled.)

Some businesses were also told to close, including auction houses, secondhand dealers and furniture stores—an action which affected many Jewish operators. Attempts by the province to reduce the business hours of all retail stores faced strong opposition, and these rules were not enforced in Calgary. Halloween celebrations were canceled. 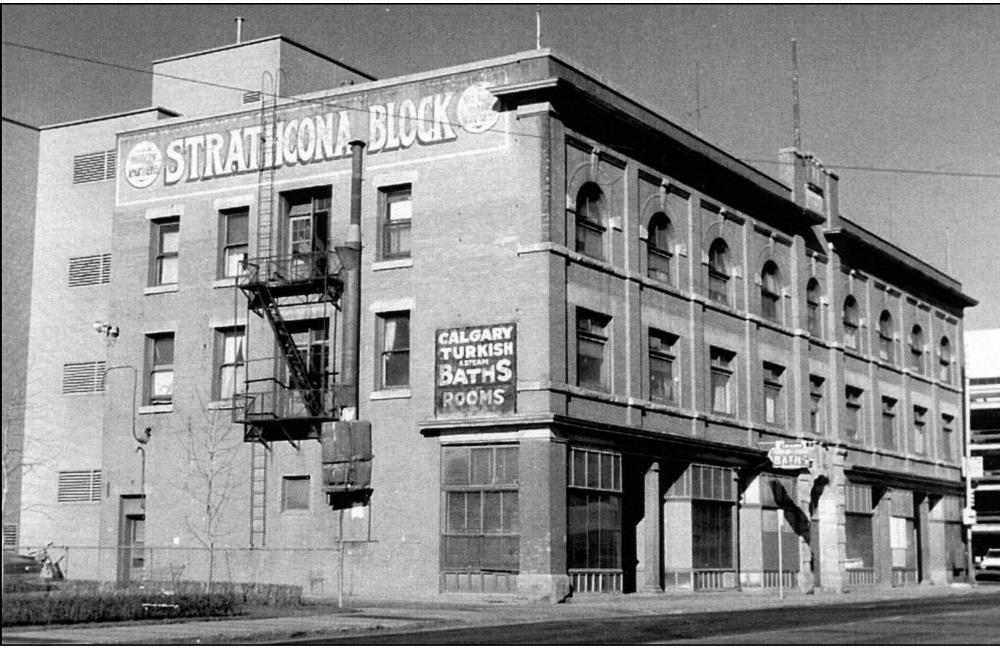 Late in October the authorities closed all schools. Some had already been converted to hospitals, and Stanley Jones School was used as a dormitory for children whose parents had died or who were hospitalized. Other schools housed soup kitchens; many families were unable to cook for themselves. Jewish women were among those who volunteered to assist the sick. The Ladies’ Aid Society set up the Jewish Emergency Kitchen in the Zionist Hall, in the Strathcona Block, at 707 – 3rd Street East.

The Morning Albertan noted “Kosher Kitchen has been organized by Mrs. B. Ginsberg … for the purpose of providing Jewish people who are suffering from influenza with soup and delicacies. … anyone of any denomination will be furnished with supplies.

Harriet Ginsberg fell ill with influenza, but the aid work went on.

Jewish pioneer Sema Goldenberg worked as a practical nurse at the Emergency Hospital, on 12th Avenue East, where many Jewish patients were treated. One of them was Hyman Cohen, who would later marry her daughter, Mary Goldenberg.

Men with cars were asked to donate their time. Harry Allen, of the Allen Theatre family, organized a group of car owners to drive public nurses around the city, and to deliver food to influenza victims. Charles Bell was among the hotel owners donating linens to sick families.

The first Jewish influenza death was that of Harry Rapaport, the 28-year-old owner of two downtown jewelry stores, on October 19th. His passing merited a newspaper report; he was recalled as “one of the best-known young businessmen in the city,” and was noted to have been a composer of popular songs. He had been in Calgary for four years, and his body was shipped to his family in Minneapolis.

A married couple died next; we know only their last names, from their gravestones at the old Jewish cemetery. Mrs. Stone died on October 25th, Mr. Stone passed away four days later. Sarah Harrison, age 22, also died on October 29th. A few days later Leah Goldstein died. Coincidentally, her husband worked for the first Calgary victim, Harry Rapaport, and her remains were also sent to Minneapolis.

Two Jewish men, Morris Oleon and Abraham Gopman, died on November 6th. Gopman’s death was especially tragic. The 35-year-old immigrant had left his family – wife Bessie and four children – in Russia. Gopman fell victim to influenza during the late stages of their journey to Calgary, and they arrived to find he had died. Friends took the family in, and Bessie remarried some years later. (Their daughter Goldie married Leo Sheftel.)

The first epidemic had largely run its course by the end of November in 1918. Hospitals gradually closed, schools reopened and business returned to normal. However, within a few weeks new influenza cases appeared; the epidemic’s second wave had begun. Fewer cases were reported this time. Schools again closed, but there were fewer restrictions on public-space use than in the first phase.

There were relatively few Jewish fatalities during the second wave. A 2-year-old child, Bernard Grinker, died in January of 1919. In mid-1919 Yeheshua Shloima Schecter died. (Five Jewish newborn babies and infants also died in the first four months of 1919.)

There were minor influenza outbreaks in Alberta during the early 1920s, but the drama and tragic scope of the 1918-1919 epidemic has not been repeated, or forgotten. Survivors recalled the epidemic as a period of stress, but some non-tragic memories emerged. Becky Levitt-Cohen recorded a colorful epidemic memory from her childhood. Everyone in her family was ill except for her father, Jacob Weinborn, who decided to make pancakes.

“He asked my mother where she kept the oil and my father found it and fried the pancakes. When we tried to eat them we threw up. My father had used machine oil.”

Modern history’s worst epidemic took a huge toll across the country and deprived the Calgary Jewish community of some of its most promising young citizens. However the community was strengthened in some ways.

Jewish women showed they could organize and work independently, and effectively. Certainly the Chevra Kadisha (Jewish burial society) and Rabbi Simon Smolensky were challenged, but it was the Jewish women who risked infection while providing hands-on care and immediate delivery of charity to the sick.

Epidemic-engendered feelings of susceptibility and insecurity likely encouraged Jews to form stronger communal ties; the years following the great epidemic saw a major growth in organizations, both of self-help groups, and of charity outreach societies.

This article was originally published in the June 2003 edition of Discovery: The Journal of the Jewish Historical Society of Southern Alberta.

1 Comment on "From the JHSSA archives: Calgary Jews face an epidemic – 1918"