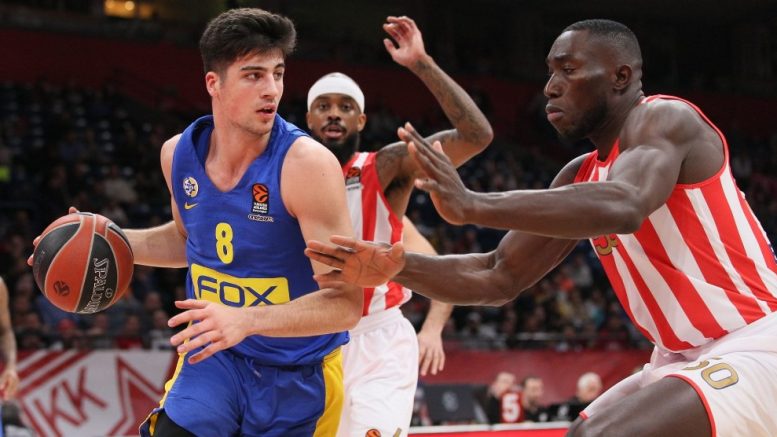 JERUSALEM (JTA) — Deni Avdija is no doubt aware that ESPN ranks him as the fifth-best basketball prospect in the world, even though he’s only 19.

With that in mind Avdija — a lanky star who has been playing in Israel’s top professional league and internationally for Maccabi Tel Aviv — declared on Thursday that he will enter the NBA Draft scheduled for June 25 (though it could be delayed, like so many other major sporting events, because of the coronavirus crisis).

He is only the sixth Israeli ever to enter the draft for the world’s top pro league and is expected to be the second, after Omri Casspi, to be drafted in the first round.

Avdija, who was born in Kibbutz Beit Zera in Northern Israel, is carrying on a family tradition with his athletic prowess. His father, Zufer,  a Muslim Serbian-Israeli citizen, played for his native Yugoslavia’s national  basketball team as well as several Israeli pro teams in the 1990s. His mother, Sharon Artzi, is a Jewish Israeli and former track and field athlete.

ESPN describes him as a future “big playmaker” — at 6-foot-9 he is tall enough to play power forward, but also “has the ballhandling, creativity and playmaking skill” of a point guard. Avdija, its scouting report adds, brings “toughness, competitiveness and swagger” to the court.

Bleacher Report’s Jonathan Wasserman has projected Avdija to be the No. 2 pick for the Cleveland Cavaliers, where a young LeBron James launched a career that will land him in the Hall of Fame.

Avdija made his draft announcement on ESPN’s morning show “Get Up.”

“The NBA is the best league in the world. There is a lot to learn over there and a lot of experience there,” he told ESPN. “It’s going to be great to take my game to the next level.”

His Maccabi Tel Aviv club plays in Israel’s Premier League and in the EuroLeague. Casspi had also played for Maccabi when he was selected 23rd by the Sacramento Kings. He played 10 years in the league for several teams.

After initially deferring the military draft, Avdija joined the Israeli army — mandatory for all young citizens of the state — on April 1 when the basketball season was delayed due to the coronavirus crisis.

But he was named an Exceptional Athlete, and will be allowed to complete his military service abroad in training, or by playing in the NBA. He’d likely prefer the latter.