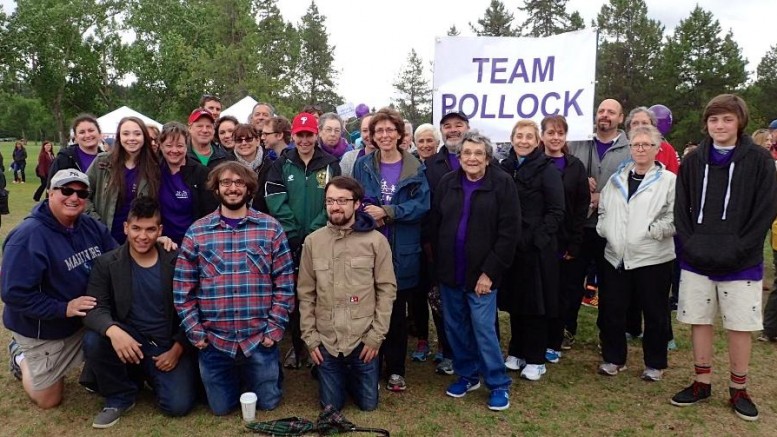 Some of Team Pollock's members posed for a picture just prior to participating in the 2015 ALS Edmonton Walk,

– Team Pollock rallied once again this year raising over $16,000  for the ALS Edmonton Walk which was held on June 13 at William Hawrelak Park. This is the 8th walk for Team Pollock which includes a remarkable group of loving friends and family who are walking to remember Norm Pollock z”l , who battled the disease for 5 years before he passed away in June 2012.  Norm, a loving husband, father, son, brother, uncle and friend was a successful Witten lawyer and an active member and leader in Edmonton’s Jewish community.

Team Pollock joined the other 1400 caring individuals who gathered in the park to raise funds for ALS (Amyotrophic Lateral Sclerosis) and to increase awareness about the fatal disease.

ALS, sometimes called Lou Gehrig’s disease, is a neurological disease that attacks the nerve cells responsible for controlling voluntary muscles. It progresses very quickly, paralyzing the body while the mind remains alert. Most patients die within two to five years of diagnosis and there is no cure.

Norm’s battle with ALS was tragic but it also touched our community deeply.  As he became more debilitated, his friends and family came together with a tremendous outpouring of support. The level of caring demonstrated by this group of men and women was amazing and overwhelming. Norm inspired his friends to be the best possible friends and the whole community was blessed to witness and contribute to this loving display of family and friendship.

Norm fought a heroic battle with ALS and in so doing, he taught a community of baby boomers the true meaning of friendship and devotion.

At this year’s ALS walk, Team Pollock was represented by family members and friends from Winnipeg, Calgary and of course Edmonton.  We were surrounded by courageous individuals and their loving inspirational families and friends. Sixty per cent of the funds raised during Saturday’s walk will remain in Alberta to provide programs and services for people with, and affected by, ALS. The remaining 40 per cent goes towards research.

This year a record $280,000 was raised for ALS but the goal was $313000. Click here if you were unable to attend the ALS Walk but would still like to participate in the fundraising .