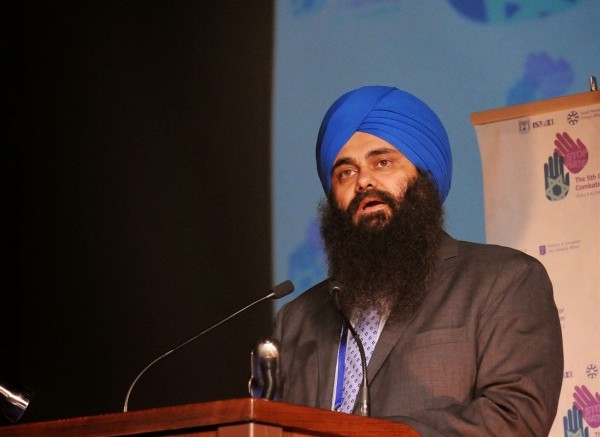 – Canada’s minister of state for multiculturalism believes grouping anti-Semitism with other forms of racism and hate crime waters it down.

“Anti-Semitism itself is the oldest form of hatred. It has resulted in the Holocaust… the killings of millions of people,” Tim Uppal said.

“I consider myself a very visible minority,” said Uppal, who is Sikh and wears a turban. “To me, racism is real, it’s something we do have to address, but I think on anti-Semitism, the level of misinformation, the level of hatred – it goes much deeper than just the average racism.”

Uppal was in Israel for the fifth Global Forum for Combating Antisemitism, May 12 to 14.

“There’s always discussion of ‘let’s broaden it,’ but I think that dilutes it,” Uppal told The CJN.

At the forum’s opening event, “the representative from the United Nations, whenever he said ‘anti-Semitism,’ he said we [also] have to deal with… Islamophobia, and racism of all kinds. He kept doing it. That’s… part of the problem with the UN. They’re diluting themselves so much they’re not going to end up solving anything.

“Anti-Semitism is unique,” Uppal said. “On the Internet, in a day… there are 100,000 expressions of hatred. Of those, 80 per cent are anti-Semitic. This is a unique problem that requires unique solutions.”

It is a growing problem everywhere, including back at home. “We are seeing a rise in incidents of anti-Semitism around the world, but disturbingly enough, we’re seeing this in Canada as well.”

Not all anti-Semitic incidents are reported, he believes. “When someone gets hurt, you’d hope they’d go to the police, but I’m sure there are other times – whether it’s vandalism that they’ve been able to clean up themselves, or verbal exchanges – that don’t get reported.”

Uppal, who has championed Jewish causes since he was elected in 2008, said that when he was growing up in Alberta, “Jews weren’t even on the radar… It’s very  possible I had Jewish friends, but as a kid, I never knew it.”