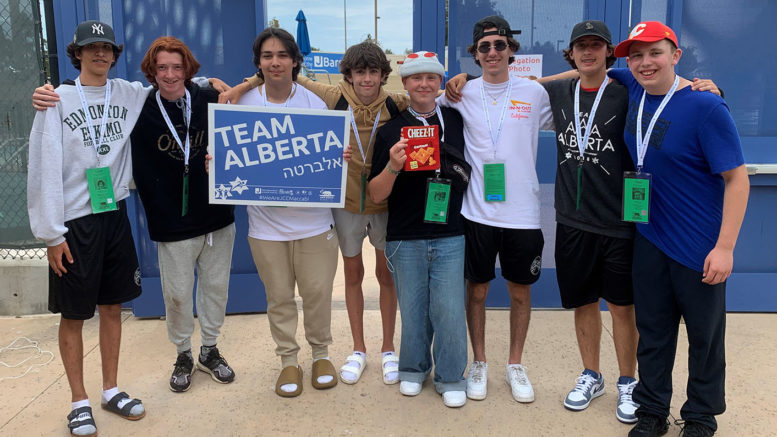 Eight teens competed as Team Alberta at the JCC Maccabi Games in San Diego this summer. Photo by Marit Abrams.

(AJNews) – This year, after a 2-year hiatus due to Covid-19, the JCC Maccabi Games was hosted by the Lawrence Family JCC on the Jacobs Family Campus in San Diego, California from July 31 to August 5. Team Alberta included five delegates from Edmonton and three from Calgary. With support from Zach Hyman’s foundation, the Hyman Family Foundation, the trip was made more affordable for families to participate.

The JCC Maccabi Games is an Olympic-style sporting competition held each summer in North America and it’s the second largest organized sports program for Jewish teenagers in the world.

Marit Abrams, Delegation Head, traveled with the eight Jewish teens from the Alberta delegation to the week-long games in San Diego. The JCC Maccabi Games includes a variety of sports for teens to compete in. Team Alberta sent athletes to compete in hockey, basketball and swimming. “They were a really good group of boys…really enthusiastic,” Marit said.

In addition to cheering the athletes on at each event and communicating with their families back home, Marit was also involved in the planning process. It was a great experience overall and she’d love to lead it again, even with the amount of work that went into getting the Alberta delegation to compete this year. Marit expressed her appreciation for the support from parents and the community throughout the process. She shared that, outside of supporting the athletes, a personal highlight from the experience was having the opportunity to meet other Jewish adults who were helping make the events a success.

Hayden Pertman, one of the teens from Edmonton, represented Team Alberta for hockey alongside several other Team Alberta athletes. He grew up playing hockey and was excited to compete in his first JCC Maccabi Games. Even though the competition was tough, he said that “meeting all these new people was probably the best part,” adding that he was able to connect with many of them on social media afterwards. He also recalled a memorable moment from the opening ceremonies that left a lasting impression on him. During an impassioned speech by Bill Goldberg, former NFL defensive tackle and current professional wrestler, Goldberg expressed that he had never been prouder to be involved in an event, than at these JCC Maccabi Games.

One of Team Alberta’s athletes from Calgary, Jordan Horwitz, is heading into grade 12 this fall. He participated in the hockey event at the JCC Maccabi Games for a second time. In 2019, he went to Detroit to compete as well, but described that this time he “felt like a leader on the hockey team.” He enjoyed the Games immensely and wished they could have been longer; a feeling he recalled from 2019 as well. This was Jordan’s last opportunity to play in the Games since next year he will exceed the age limit of 16; however, he said that it ended on a high note. The team Jordan played on included a mix of athletes from Ft. Lauderdale, Pittsburgh, and Orange County. In their winning game, he scored six goals for the team. A highlight for Jordan was jersey swapping with one kid from Philadelphia where they traded hockey jerseys.

When asked what he would tell kids who are on the fence about going to the Games, Jordan said “just go. It’s so much fun.” He added that you get to connect with new Jewish kids from all over the world.

Aiden Kislik, another athlete from Calgary, competed in 3×3 basketball in his first JCC Maccabi Games. Aiden had been playing basketball for 4-5 years and, with encouragement from friends, family, and teachers, decided to participate in this year’s event. His team may have lost to the eventual champions, but he described the entire Games as “a big fun experience.” Aiden echoed the other athlete’s sentiments when he expressed how meeting other Jewish athletes his age from around the globe and playing the same sport was one of the best parts during his time in San Diego. His family was also able to come cheer him on which he said made it more enjoyable.

In addition to the sports component of the Games, there were a variety of activities held throughout the week that the teens participated in. These activities included a JCC Cares program which has the teens volunteering within the host’s community, teen programming staffed by Israeli counselors (Shlichim) and volunteers from the host community, host family nights where they spent time with their billet families, and more. Aiden gave a special shout out to the billets and shared how nice they were and that “everyone was super interested to meet us.”

In 2023, JCC Maccabi Games is going to Israel and Ft. Lauderdale, Florida. Stacey Leavitt-Wright, Jewish Federation of Edmonton CEO, is looking forward to next year’s Games. She expressed that JFED has applied for spots in Israel and Ft. Lauderale, and she is hoping they can bring a delegation to both games. Keep your eyes peeled for more information!

On Sunday, September 11 from 7:00 – 8:30 pm, the Jewish Federation of Edmonton is holding an info night at Talmud Torah School to showcase programs for youth in grades 7-12, including JCC Maccabi, BBYO, March of the Living, and many other community programs. If you are interested, please contact info@edjfed.org.

Mazel tov to all the athletes!