(AJNews) – Few details have been vividly portrayed about Jewish life in Poland before the Holocaust but on September 5 and 8, Edmonton’s Metro Cinema is screening a powerful film that enables viewers to experience one community by analyzing a three-minute home video – shot in 1938.

Three Minutes: A Lengthening is an amazing documentary directed by Bianca Stigter. Three haunting minutes of rare colour footage, depicting the Jewish inhabitants of Nasielsk, Poland, are the basis of this examination of what was lost in the Holocaust. Stigter analyzes every frame of the home movie, which writer Glenn Kurtz found in his parents’ home in Florida and used as the basis for his own detective work into the victims and survivors. 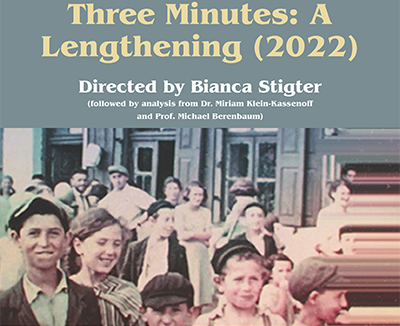 The three minutes of footage are the only moving images left of the Jewish inhabitants of Nasielsk before the Holocaust. Shortly after the footage was filmed, all of Nasielsk’s Jews were rounded up, sent to ghettoes and, eventually, extermination camps. Very few survived the war.

The footage is powerfully edited to create a film that lasts more than an hour. Different voices enhance the images. Glenn Kurtz, grandson of David Kurtz, provides his knowledge of the footage. Maurice Chandler, who appears in the film as a boy, shares his memories. Actress Helena Bonham Carter narrates the film essay.

For Stigter, the crafting of this film was more than a documentary – it was a passion project. Though 70 minutes in length, 99.9% of what you see in “Three Minutes” are the actual three minutes of footage.

As reviewed in the Times of Israel, “first it runs through unimpeded, then we see it backwards and forwards, halted, blown-up, re-filtered, cut apart and stretched out. The audio mixes interviews, primary sources, and narration written by Stigter — and voiced by Helena Bonham Carter — that’s part explanation, part philosophical rumination.

“Beyond the historical and emotional resonance of the story, Three Minutes — A Lengthening is a fascinating analysis of the act of seeing.”

Three Minutes – A Lengthening will be screened at Metro Cinema, 8712 109 Street in Edmonton on September 5 at 3:30 pm and on September 8 at 7 pm. Watch the trailer here. Don’t miss this extraordinary film!

Be the first to comment on "Metro Cinema presents an acclaimed film on life in Poland before the Holocaust: September 5 and 8"