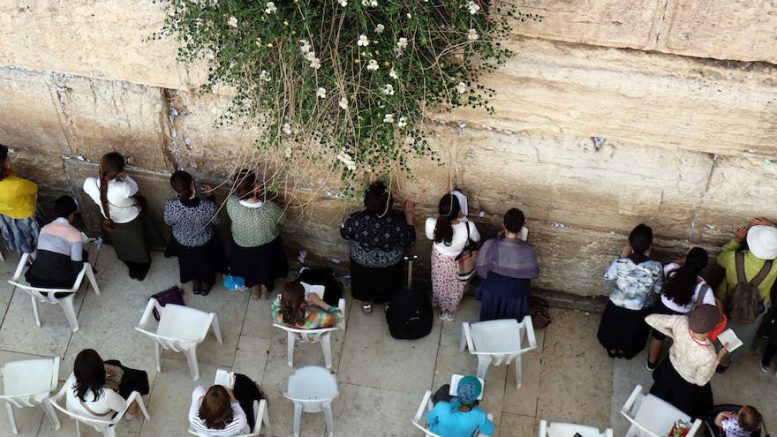 Jewish women praying at the women’s section of the Western Wall in Jerusalem, May 16, 2017 (Thomas Coex/AFP/Getty Images)

But for the past five years, despite broad internal consensus and consistent pressure, the American Jewish establishment has been unable to persuade Israel’s government to create an equitable space for non-Orthodox prayer at the Western Wall.

The latest setback in that fight came Sunday, when Prime Minister Benjamin Netanyahu announced the suspension of a 2016 agreement to expand the holy site’s southern section, used for egalitarian prayer, and appoint an interdenominational commission to oversee it. The compromise was a result of three years of negotiations among the Jewish Agency for Israel, non-Orthodox leaders, the Israeli government and the Western Wall’s haredi Orthodox management.

Work to expand the egalitarian section will continue during the suspension, Netanyahu’s office said. But any new agreement would have to be negotiated by Israel’s Cabinet and come to a new vote before moving forward.

The suspension is a result of pressure from Netanyahu’s haredi Orthodox partners, who allowed the compromise to pass last year but have since railed against it, blocking its implementation. American Jewish leaders had hailed the agreement last year as a step forward for Jewish pluralism and, at the time, Netanyahu called it a “fair and creative solution.”

Now the American Jewish leaders who pushed for the agreement say they feel betrayed by Netanyahu. They will be meeting in Israel this week to discuss a response, and the Jewish Agency will hold a special session Monday to discuss the issue. But no leaders committed to concrete plans for a response, beyond continued vocal protest.

“It’s deeply troubling and very disappointing that they would suspend the implementation of this resolution,” Jerry Silverman, CEO of the Jewish Federations of North America, told JTA on Sunday. “We are going to be assertive in asking what’s next.”

Advocates for the agreement have warned of a crisis among American non-Orthodox Jews should the compromise collapse. Last year, Rabbi Rick Jacobs, president of the Union for Reform Judaism, said the collapse of the deal “will signal a very serious rupture in the relationship between North American Jewry and the State of Israel.”

On Sunday, Jacobs expressed strong disappointment in the suspension, but did not say it would lead to any concrete loss of support for Israel from the Reform movement. He cited a list of recent Israeli government decisions opposed by the Reform movement, including recent legislation to bar supporters of Israel boycotts from entering the country, and another law legalizing Israeli settlements’ appropriation of Palestinian land.

“This decision screams out that when all is said and done, the State of Israel and government of Israel is willing to sell our rights and our well-being for coalition politics,” he told JTA. “This does not add up to be a compelling example of what all of us understand Jewish life to be, and if there’s growing dissonance between those who lead the State of Israel and those who lead American Jewry, the consequences are serious.”

Rabbi Julie Schonfeld, executive vice president of the Conservative Rabbinical Assembly, said the best way forward for non-Orthodox leaders may be Israel’s Supreme Court. A court petition filed by a range of Israeli pluralist groups in 2013  seeks to compel the government to provide for non-Orthodox prayer at the wall, but had been tabled while the 2016 agreement was being negotiated and implemented.

Now that the agreement is suspended, Schonfeld believes the Supreme Court may rule favorably on the petition, forcing the government to accede to non-Orthodox demands.

“The Israeli Supreme court seems to be the only governmental venue that appreciates the long-term impact of Israel advocating its role as the home for all Jews,” she said. “Inevitably, we will find our way back to the courts. We will continue to protest.”

The Prime Minister’s Office did not response until Monday afternoon, when it released a statement saying it was working to ensure that Jews of all streams can feel comfortable praying at the wall.

Cabinet Secretary Tzachi Braverman said in the statement that Netanyahu had issued a directive instructing that work be expedited to create a comfortable egalitarian section to the south of the Western Wall plaza. A small prayer area near that site, known as Robinson’s Arch, has been in use since 2000.

Braverman said Netanyahu had issued a directive that “Jews from all streams be able to continue praying there – as they are able to do today.”

Braverman also said that Netanyahu instructed him and fellow minister Tzachi Hanegbi “to continue dialogue in order to try and reach a solution.”

“It is important to Prime Minister Netanyahu that every Jew is able to pray at the Western Wall,” Braverman said in the statement, adding: “I recommend that those trying to exploit this issue be precise with the facts.”

Leaders of Diaspora Jewry and the Women of the Wall group originally sought a space at the familiar Western Wall plaza to the north of Robinson’s Arch where women and men could pray together and women could wear tallitot and yarmulkes and pray from a Torah scroll. The January 2016 compromise called for a larger and more permanent prayer space to the south of the plaza, a single entrance to the entire Western Wall complex, a pluralistic joint committee to oversee the southern area and a budget to pay for it.

Critics of the freeze are unlikely to be assuaged by Braverman’s terse defense of the status quo.

Anat Hoffman, chair of the Women of the Wall prayer group, called the decision “shameful to the government and its women ministers who were exposed using their vote against women.”

“It’s a terrible day for women in Israel when the prime minister sacrifices their rights while kowtowing to a handful of religious extremists, who want to enforce their religious customs while intentionally violating the rights of the majority of the Jewish world, 51 percent being women,” she said.

“Women of the Wall will continue to pray as we always have in the women’s section at the Western Wall, with a Torah scroll and prayer shawls, until women’s equality will be established at the Kotel. Just like you wouldn’t ask a man to take off his kippah, don’t ask us to stop praying according to our conscience.”

Defense Minister Avigdor Liberman, the head of the right-wing Yisrael Beiteinu party and one of two Cabinet members to vote against the decision to freeze the agreement, said in a statement that it “constitutes a severe blow to the unity of the Jewish people, Jewish communities, and the fabric of relations between the State of Israel and the Jews of the Diaspora.”

Liberman said at the beginning of his party faction’s meeting Monday that he would not bring down the government over the issue, however, but work to come to a compromise.

Yair Lapid, head of the opposition Yesh Atid party, spoke in English at the beginning of his party’s faction meeting in order to reach the Jewish Diaspora, particularly U.S. Jews, he said.

“I want to tell you that the vast majority of the citizens of Israel oppose the two decisions taken yesterday by the government,” he said, referring to the Western Wall decision and a separate conversion bill that would solidify conversions in Israel under the authority of the haredi-dominated Chief Rabbinate.

He also said, “We will fight this together until these two decisions are canceled.”

He added: “Every Jew in the world, and non-Jews, can come pray there.

“We have nothing against Jews, in any place they may be. They are all our brothers. Our fight is against the approach, this ideology which is attempting to bring a new Judaism here, is trying to destroy everything that we built here over the years.”

A range of other groups criticized Sunday’s decision, including the American Jewish Committee, the Women of the Wall, the Israel Democracy Institute think tank and the Jewish Agency, whose chairman, Natan Sharansky, was one of the architects of the 2016 agreement.

“After four years of intense negotiations, we reached a solution that was accepted by all major denominations and was then adopted by the government and embraced by the world’s Jewish communities,” Sharansky said in a statement. “Today’s decision signifies a retreat from that agreement and will make our work to bring Israel and the Jewish world closer together increasingly more difficult.”

Non-Orthodox leaders also decried the Israeli government’s advancing a bill to centralize authority for Jewish conversions under the Israeli Chief Rabbinate, a haredi-dominated body. Silverman compared the bill to a 2010 bill on conversions in Israel, which American Jewish groups also opposed because they argued it would delegitimize non-Orthodox conversions.

“The conversion bill that was approved by the ministerial committee and Knesset is one that definitively changes the status quo in conversions,” Silverman said. “This is something that almost every 10 years comes up, and would have a dramatic effect on who is a Jew, which obviously has a significant impact.”