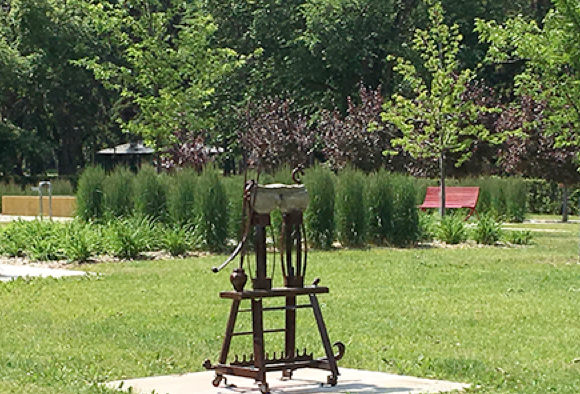 (June 29, 2017) – Edmontonians and visitors to our city will have the opportunity to enjoy and admire three incredible pieces of sculpture by Susan Owen Kagan that will be installed this week at Borden Park situated in NW Edmonton.

Her concrete and steel sculptures, entitled Diablo Boys, Whirly Birds and Mandarin Flip will be among eleven artworks by four of Edmonton’s most prolific women sculptors that will be installed in Edmonton’s historic Borden Park. The works, by Sandra Bromley, Kasie Campbell, Agnieszka Koziarz, and Susan Owen Kagan, are part of the Borden Park Temporary Sculpture Loan Program. The program presents temporary sculptural exhibitions that are rotated every two years. The program was initiated in 2014, with the inaugural exhibition extended into 2017.

The Edmonton Arts Council public art and conservation teams are in the process of installing the new works. Installation is anticipated to be complete the week of July 3, 2017. The sculptures will be on display until summer 2019.

The Borden Park Transitory Sculpture Program leverages the inventory of completed, but mostly undiscovered artworks created by local artists. The new exhibition presents works by women artists from various stages of their careers. The artists are active members of the city’s arts community as educators, activists, and facilitators.

“I feel honoured to have my work included in this exhibit, and displayed in beautiful Borden Park alongside such wonderful Edmonton artists,” says artist Susan Owen Kagan, whose previous commissioned work includes the significant and thought provoking Edmonton Holocaust Memorial Sculpture which is located on the Alberta Legislature Grounds.

Sculptor Kasie Campbell, who recently completed an Artist in Residence term at the City of Edmonton’s Kennedale Facility, echoes Susan’s excitement saying, “I think most artists try to be thoughtful about where they would like their work to end up, but you never know what will happen, you only hope that whatever you’ve made might have some sort of impact… I am absolutely delighted to be able to take my work out of the studio and into Borden Park!! It still feels a little surreal and has been really inspiring for me to show alongside such significant, diverse and strong women artists whom I admire!”

The sculptures will be placed throughout the park – five adjacent to the formal fountains and gardens; a further six works will be nestled in the trees along the park footpath. The recent redevelopment of Borden Park served as a catalyst for the program – the inclusion of public art has increased the park’s popularity as a community gathering place and destination for bicycle tours, dog walkers, families, and selfie aficionados.

The Edmonton Arts Council will celebrate the new installations with a Public Art Picnic on August 24, 2017 – details will be forthcoming. All are invited to come by, meet the artists, and enjoy snacks!

Here is some more information about these talented artists:

Susan Owen Kagan studied drawing and painting at the Banff School of Fine Arts in 1976, and at the University of Western Ontario in 1980/81. She received a BFA with Honours in Sculpture from the University of Alberta in 1984. She has since forged a successful career as a sculptor; her work has been included in many prestigious exhibitions and can be found in public and private collections across Canada. Owen Kagan has also completed several private and publicly-funded commissions, including the Edmonton Holocaust Memorial, which is located on the grounds of the Alberta Legislature.

Sandra Bromley’s art works have appeared in solo and group exhibitions in Europe, Asia, and North America. Her multidisciplinary, interactive art includes traditional sculpture as well as video, sound, photography, and installation. She works solo and in collaboration with artists as well as with professionals in other disciplines.

Graduating from the University of Alberta in 1979 with a BFA (Distinction) in sculpture, Bromley has received numerous awards throughout her career, including the 2000 Salute to Excellence Arts Award from the City of Edmonton (which she shared with Wallis Kendal for the Gun Sculpture project); a 2002-03 Canadian Consortium for Human Security Fellowship (artworks concerned with issues of women and children in post-conflict countries) that took her to work in Sierra Leone and Cambodia; and the Queen’s Jubilee Medal.

Bromley is co-founder of the iHuman Youth Society (serving high-risk youth, using an arts-based program) and founder of the Sierra Leone Bo Girls Group, for which she presents an annual fundraiser to aid female victims of war in Sierra Leone.

Kasie Campbell’s artistic practice integrates a variety of media including sculpture, installation and performance. In 2015, following completion of a Bachelor of Fine Arts degree at the University of Alberta, she received the ISC’s Outstanding Student Achievement Award in Contemporary Sculpture. Her work was then exhibited in Jersey City, NJ and Chicago, IL and published in Sculpture Magazine.

Working with Keyano College art students in autumn 2015, Campbell completed her first transitory public art piece, for the Ignight Festival in Fort McMurray AB. Campbell had her first Solo Exhibition at Creative Practices in May 2016 and is looking forward to her next Solo Exhibition at the Art Gallery of Grande Prairie within the next two years. She recently completed a term as Artist-in-Residence for the City of Edmonton Kennedale Facility.

Born in Poland, Agnieszka Koziarz now practices in Edmonton. Originally a professional fashion designer, Agnieszka changed her career focus to become a full-time artist. She holds a diploma from the Academy of Fashion Design in Ottawa (1998); Bachelor of Fine Arts degree with distinction (2011, University of Alberta); an MFA in sculpture under Peter Hide (2014, U of A).

Her steel sculptures explore aspects of the immigrant experience; themes of home, displacement, disorientation, and the transformation of individual identity within the context of community.