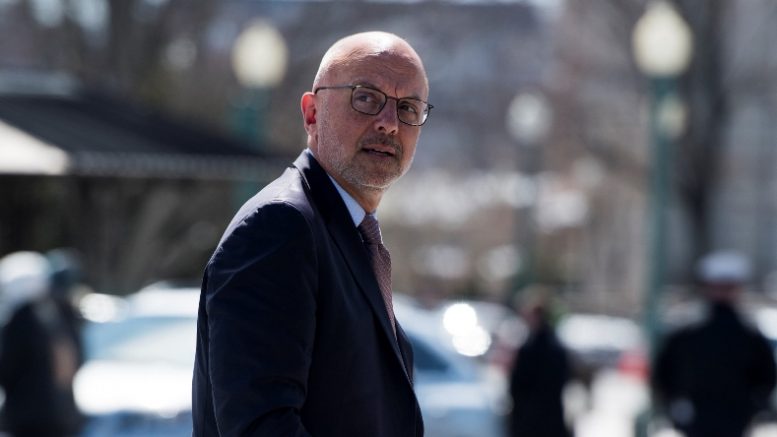 Rep. Ted Deutch walks up the House steps, March 22, 2018. The Florida Democrat co-signed a statement with other pro-Israel Democrats to Prime Minister Benjamin Netanyahu expressing concern over the possibility of Israel’s annexation of the West Bank. (Bill Clark/CQ Roll Call)

The prime minister was taking a congratulatory call from his defeated rival, Blue and White party leader Benny Gantz, when the messages were issued at nearly the same time from three corners of the U.S. Jewish community. Who knows if Netanyahu cared about or even knew about the shots across the bow from the friendly figures he has hosted on countless occasions in his office during his decade in power.

But each warning was clear and unmistakable: Annex the West Bank at the peril of U.S. support for Israel.

One came from four of Israel’s staunchest congressional supporters — Reps. Eliot Engel and Nita Lowey, both D-N.Y., Ted Deutch, D-Fla., and Brad Schneider, D-Ill. Another was from Jewish groups who represent the plurality of U.S. Jews, including five representing the Reform and Conservative movements. And another was from Alan Dershowitz, the constitutional scholar whose other brand is defending Israel.

In what appears to be an unprecedented plea, establishment Jewish groups were imploring a U.S. president to restrain an Israeli prime minister. A letter to President Donald Trump released by nine groups to the Jewish Telegraphic Agency said that annexing parts of the West Bank, as Netanyahu pledged on the eve of the election, “will lead to greater conflict between Israelis and Palestinians, severely undermine, if not entirely eradicate, the successful security coordination between the State of Israel and the Palestinian Authority, and galvanize efforts such as the Boycott, Divestment, and Sanctions movement that are intended to isolate and delegitimize Israel.”

The warning that annexing territory would “create intense divisions” in the United States was significant coming from the leadership of the two largest religious streams in the United States, with a combined membership that would constitute an overwhelming majority of synagogue-going Jewish Americans. Signing the letter were the Central Conference of American Rabbis and the Union for Reform Judaism, affiliated with the Reform movement; and the United Synagogue of Conservative Judaism, its Rabbinical Assembly, and Mercaz, the Conservative movement’s Zionist affiliate.

The other four signatories are the Anti-Defamation League, the lead Jewish civil rights advocacy group; Ameinu, a liberal Zionist group; the National Council of Jewish Women; and the Israel Policy Forum, a group focused on reaching a two-state solution. All but IPF are members of the Conference of Presidents of Major American Jewish Organizations, the main umbrella group.

The ADL’s inclusion represents a significant tonal shift in the organization since Jonathan Greenblatt took over as CEO from Abraham Foxman four years ago. Foxman’s credo was to defer to Israel on security matters. Greenblatt in an interview said he wanted to wait until the dust settled before pronouncing further on the issue.

“We continue to believe in the two-state solution,” he said. “A lot of statements are made in the course of the campaign. We’ll see, as the prime minister attempts to build a coalition, how he proceeds on this issue.”

The letter warned that annexing territory will “make unwavering support for Israel and its security far more difficult to maintain,” noting that it could shake the pro-Israel consensus in the United States already under strain.

It’s a concern rattling pro-Israel Jewish Democrats and was evident in the separate statement, released at virtually the same early-morning hour, by the four members of the U.S. House of Representatives who are closest to the American Israel Public Affairs Committee.

“As strong, life-long supporters of Israel, a U.S.-Israel relationship rooted in our shared values, and the two-state solution, we are greatly concerned by the possibility of Israel taking unilateral steps to annex the West Bank,” said the statement by Engel, Lowey, Deutch and Schneider.

The four routinely attend AIPAC conferences and have split with their party in the past to favor AIPAC positions, including in 2015, when each of them opposed the Iran nuclear deal. Three of the four hold senior positions in the House caucus: Engel chairs the Foreign Affairs Committee, Lowey chairs the Appropriations Committee and Deutch chairs the Middle East subcommittee. Engel and Lowey spoke together at last month’s AIPAC policy conference, their appearance a signal of continued support for Israel within the Democratic Party.

That was a hard enough case to make this year, with Israel critics within the party becoming more outspoken. Extending Israeli law to Jewish settlements, even isolated ones, would kill the prospects of a contiguous Palestinian state and likely draw more outcry from the party.

Asked to comment on the lawmakers’ statement, AIPAC’s spokesman, Marshall Wittman said: “We have long maintained that a durable Israeli-Palestinian peace can best be achieved through direct negotiations between the two parties, resulting in a Jewish state living side by side in peace with a demilitarized Palestinian state. The Palestinian leadership should end its refusal to come to the negotiating table with the Israelis.”

Some of Israel’s best friends among Democrats in the Senate, including Dianne Feinstein of California, who is Jewish, and Chris Van Hollen of Maryland, who just three years ago emphasized his pro-Israel credentials in his freshman run to distinguish himself from a primary rival who was critical of Israel, also have lacerated Netanyahu for his pledge.

The third warning to Netanyahu, at a similar time on Friday morning, was a far more subtle statement from Alan Dershowitz, a figure who is close to Netanyahu and Trump, and who has written books on how best to defend Israel.

“Mazal tov to @IsraeliPM @netanyahu, who I’ve known since he was a student at MIT,” Dershowitz said on Twitter. “Waiting for the new peace plan to be implemented. Time for a fair two-state solution that assures Israel’s security.”

Dershowitz’s reference to the yet to be unveiled Trump administration peace plan was significant — there are signs that the Trump administration will include within its plan a green light for annexation. Secretary of State Mike Pompeo has adamantly refused under questioning from lawmakers in Congress to commit to two states, and David Friedman, the U.S. ambassador to Israel and one of the plan’s architects, told AIPAC last month that the plan would include Israel’s security control over the West Bank.

Just prior to the Israeli elections, Trump recognized Israel’s 1981 annexation of the Golan Heights.

Rob Satloff, who helms the Washington Institute for Near East Policy, a think-tank with longstanding ties to the U.S. and Israeli security and foreign policy establishments, wrote an analysis for Foreign Policy warning that annexation could hurt U.S. interests, unleash Arab and European efforts to punish Israel, cause the collapse of Israeli-Palestinian security cooperation and “threaten to splinter U.S. opinion when it comes to backing Israel, affecting a far larger slice of the political spectrum than just the increasingly anti-Israel progressive wing of the Democratic Party.”

Satloff didn’t direct his warning to Netanyahu but rather couched it as a call to the Trump administration not to release its peace plan, saying its likely failure would end up forcing the Israeli leader to move forward with annexation.

The trio of statements, while significant, was absent several significant constituents of the national Jewish community. AIPAC did not sign on to the letter, nor did the American Jewish Committee or the multiple Orthodox umbrella groups. The Zionist Organization of America praised Netanyahu for his remarks negating the prospect of a Palestinian state.

And in their statement, the four Jewish Democrats notably included several caveats that are talking points for AIPAC, including laying principal blame on the Palestinians for the failure to advance to a final status peace deal.

Israeli prime ministers have never paid much heed to American Jews on security issues, and in the areas where his predecessors have shown sensitivity to American Jewish sensibilities — on the status of non-Jewish minorities and non-Orthodox Jews in Israel, for example — Netanyahu has also been cavalier, scrapping even minimal concessions to American Jewish lobbying.

In a conversation with JTA Matt Brooks, the executive director of the Republican Jewish Coalition, which last week hosted Trump and his vice president, Mike Pence, at its annual Las Vegas conference, said Jewish groups don’t have the right to pressure Netanyahu, nor do they have the credibility to ask anything of Trump.

“American Jewish organizations should not tell the democratically elected government of Israel what to do,” he said. “All the groups pleading with President Trump for his support haven’t and would never lift a finger to praise or support him.”