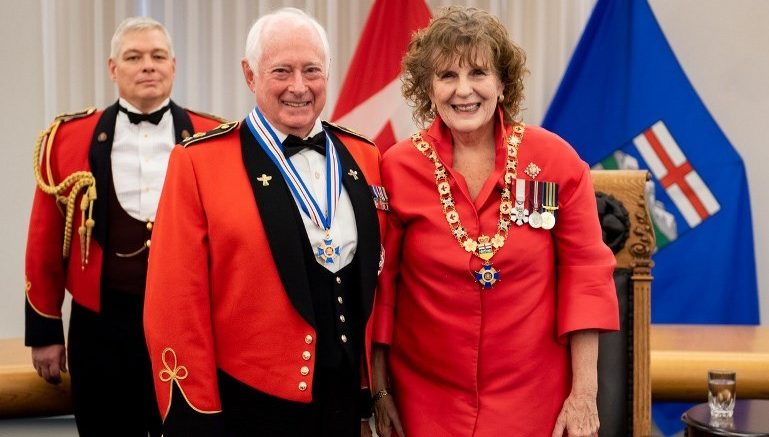 Sol Rolingher was recently inducted into Alberta's Order of Excellence - the highest honour a citizen can receive in Alberta. He is pictured above with Lt.-Gov. Lois Mitchell.

(EJNews) – Sol Rolingher was recently inducted into Alberta’s Order of Excellence – the highest honour the Province of Alberta can bestow on an individual.  He is a husband, father, grandfather, lawyer and, perhaps above all else, a community leader. He has most notably been the driving force behind the River Valley Alliance and the Phoenix Multi-Faith Society for Harmony.

HLCol Solomon J. Rolingher was born in Montreal in 1943 but moved to Edmonton in early childhood. He has fond memories of growing up in Crestwood, the neighbourhood where he discovered Edmonton’s river valley, which, later in life, became one of his great passions. 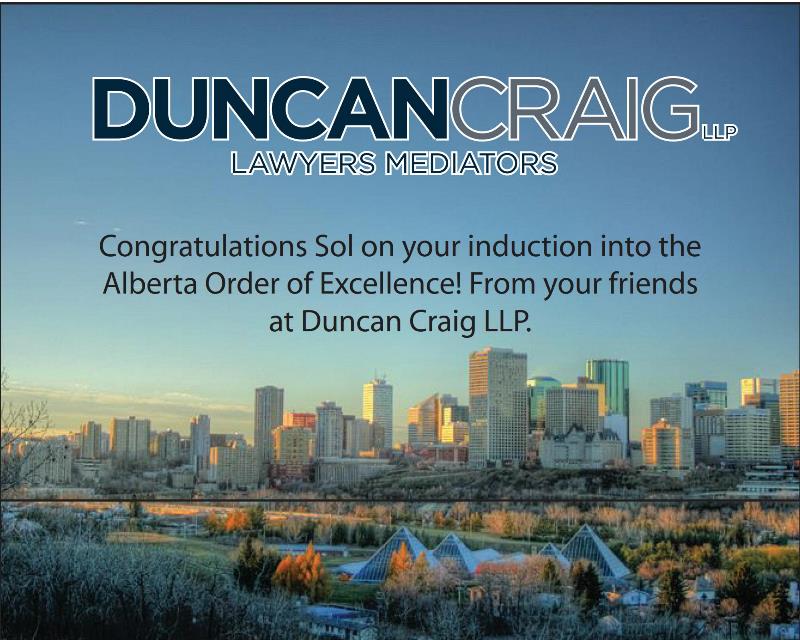 Sol earned a degree in petroleum engineering and then briefly worked for Conoco in New Orleans. He graduated from law at the University of Colorado and returned home to Edmonton. After he was admitted to the Alberta Bar he took a job as an associate lawyer with Amoco Canada Petroleum in Calgary. But he found himself drawn back to private practice and the flourishing provincial capital. He returned to Edmonton to join a long-established firm, Duncan Craig, where he became a partner in 1973.

Sol views his Jewish faith as the driving force behind his dedication to making Edmonton a better community. His influence and efforts have strongly contributed toward that objective. Sol’s motto is tikkun olam, a Hebrew phrase that translates into “repairing the world.” He believes it refers to a person’s responsibility to improve the condition of society and the world in which one lives.

A lifetime member of Edmonton’s Beth Shalom Synagogue, Sol has been deeply involved in the local Jewish community. He served on Beth Shalom’s board of directors from 1998 to 2005, including a term as president. Difficult times arose in 2000 when Halloween night saw the firebombing of Beth Shalom and another synagogue. The community, all too aware of the lessons of history, found these targeted attacks deeply disturbing. Fear heightened when the arsonist was caught but was released on bail and went into hiding.

Sol sought to bring calm and reason to the situation, reaching out in an unexpected direction. He sought the help of Larry Shaben, a former provincial cabinet member and a leader in the city’s Muslim community. The man who set the fires had grown up in violence in the occupied Palestinian territories. Through Larry, he was persuaded to meet with Sol. That meeting led to his coming forward, making reparations and facing his charges. Sol had seen the wisdom of a measured response, building bridges instead of barricades.

The next year, after 9/11, Sol and Larry used that cross-community bridge to craft a joint statement from their two communities, condemning the attacks and extending sympathy to the victims. The two communities used the moment to proclaim respect for each other’s faith, traditions and institutions. They also agreed to continue their dialogue, with a focus on mutual support and peace. These actions helped Edmonton avoid much of the 9/11 backlash against members of the Muslim community seen elsewhere.

This dialogue grew to include the city’s Christian community and the Edmonton Police Service. It blossomed into the Phoenix Multi-Faith Society, and various EPS minorities’ liaison committees and the Police Chief’s Advisory Council with the goal of fostering understanding and respect for all faiths and beliefs. Sol remains the group’s honourary chair. The organization has become a role model for other cities seeking harmony.

When Edmonton formed the River Valley Alliance (RVA), Sol was approached to serve as its chair. The Alliance sought to create one of the largest metropolitan parks in the world. And that’s exactly what Sol was able to do, thanks once again to his ability to build bridges and to lead collaborative, community-building initiatives. During Sol’s time as chair from 2002 to 2012, seven capital region municipalities were engaged as corporate shareholders under a framework agreement to create connectivity and accessibility while preserving, protecting and enhancing the 18,000 acres and 88 kilometres that make up the North Saskatchewan river valley municipal park system.

The Phoenix Multi-Faith Society and River Valley Alliance are two highlights of Sol’s work, but his community efforts have gone much further. He has served on various boards and committees in Edmonton’s post-secondary community. He has made significant contributions in health care, including to the Lieutenant Governor’s Circle on Mental Health and Addiction that aims to reduce public stigma related to mental illness and addiction.

He has served on the boards of the University of Alberta’s Board of Governors, Senate and Hospital Foundation, Caritas Health Group and the Capital Health Authority. He has been Chair of the Manning Awards for Northern Alberta, Citadel Theatre, St. John Ambulance, Canadian Corps of Commissionaires, Telus World of Science and Wellspring Edmonton. He has volunteered in various capacities as chair or member of boards and committees in the Canadian and American Bar Associations.

Devotion to community has been evident in his professional career and is clearly reflected through the efforts of his law firm. In 1994, to recognize the 100th anniversary of Duncan Craig LLP, he established the Laurel Awards to honour non-profit organizations that achieve their objectives through exceptional creativity and innovation.

Sol’s vision of community collaboration reaches beyond Alberta. After the fall of the Iron Curtain, Sol was asked by the Government of Canada to assist in teaching the basics of the practice of law to lawyers in the former Soviet Union. This opportunity allowed Sol to participate in and observe the transformation of Eastern Europe from communism to democracy.

Sol’s efforts have attracted widespread recognition. He has been knighted by the Most Venerable Order of the Hospital of St. John of Jerusalem. His many awards include the Queen Elizabeth II Golden Jubilee and Diamond Jubilee medals, the Alberta Centennial Medal, the Lieutenant Governor of Alberta Inaugural Corporate Community Leader Award and a Distinguished Service Award, jointly from the Law Society of Alberta and the Canadian Bar Association-Alberta.

Alberta Venture magazine named Sol one of Alberta’s 50 Most Influential People. He was named to the City of Edmonton’s Community Service Hall of Fame and was honoured by the Jewish National Fund Negev Gala. He has been awarded the Sovereign Medal for Volunteers by the Governor General. He was appointed by the Minister of Defence as Honourary Lieutenant-Colonel of the 1 MP Regiment of the Canadian Forces.

Sol’s accomplishments wouldn’t have been possible without the support of his wife, Marilyn, who he credits as his bedrock of his many achievements, and the support of his family. Sol has three children, Shawn (Kristi), Kristine (Allan) and Jeremy, along with two grandchildren, Julian and Jasmine. Sol defines excellence as leaving a lasting impact for others. In that sense, he has truly set the standard.