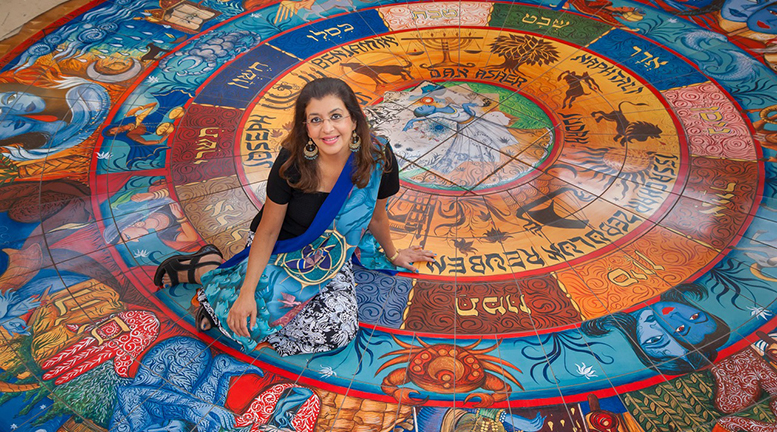 Artist Siona Benjamin will be the featured guest on Art & Scroll Studio on December 1 at 7 pm. She is pictured above with a gorgous tile installation of her art.

By Art and Scroll Studio

The art of Siona Benjamin defies categorization; at once there is the impact of images and patterns, as well as the perception of deep meaning as the characters come alive. Born out of her diverse background she uses colour and form to create powerful impact through beautiful shape and sinuous lines.

Art and Scroll Studio is proud to present Siona Benjamin on Wednesday Dec 1, 2021 at 7:00 MTD. To register for free tickets go to www.artandscrollstudio.com. An international artist and author she will share the backstory behind her art, her story of immigration and growing up in India. Program host Shelley Werner spoke with Siona in preparation for the episode.

SW: Would you say your work speaks to intolerance in the world?

SW: You’ve said that you look at your own skin sometimes as blue. Do you think this is a way of creating “the other”?

SB: The blueness came about slowly and it came about thoughtfully and I thought it has become so real for me in my life now because I feel that it evolved. I thought what skin colour would I paint myself in the beginning? Which shade of brown would be suitable? And then I found that actually instead of choosing the shade of brown, I could become the colour of the sky or the ocean and this would give me a neutrality of belonging everywhere because the sky over here is no different from the sky over India or any other country.

I became a visual storyteller. In the bargain this blue character was created and she became an icon for me of being able to express these thoughts, values, issues and being able to ask all these difficult questions. She became an appropriate theatrical character to be able to act out on the stage of my paintings.

Beauty and lyrical line are really important for me so it becomes even more dangerous when you hide danger and something more precarious under the beauty.

SW: Are biblical stories important to you?

I’m sometimes influenced by Hinduism, by Christianity, by Islam by my Jewishness and everything because I come with all of that, it was like a baggage at first. Now I don’t think of it that way, it’s more like a lot of information that I can draw from.

SW: In the painting “Lilith” You have the words to a song that says “I know how to burn when in love.” What were you thinking when you included that?

SB: That is another pop symbol that I drew from. It’s from a Bollywood song in Hindi. It means “I know how to burn in love.” It’s actually a romantic song, but I’ve completely taken it out of the context. I’ve connected it to this woman who has a bandaged hand, who has a gas mask, who is looking three, four ways around her, who is sinking into the water, who has Jacob’s ladder on one of the threads so she’s trying to ascend to someplace. When you say you burn in love it could be love which is positive but it also could be a negative kind of love that you commit yourself to.

Siona Benjamin’s art creates a totality of experience that challenges the viewer and that draws them in, and asks them to ask themselves how they feel about the “other” and the impact of the outsider both as the viewer, and as the object.

Her work can be seen at artsiona.com as well as see her gift items at bluelikeme.com, where many beautiful purposeful gems are available incorporating her powerful designs. She is the author of Growing up Jewish in India, The Zodiac Floor, and illustrator for the children’s book I am Hava.

Siona Benjamin has an MFA in painting from Southern Illinois University-Carbondale, Ill., and an MFA in theater set design from the University of Illinois-Urbana/Champaign. She has exhibited in the United States, Europe and Asia.

She was awarded a Fulbright Fellowship in 2011 to India, and a second Fulbright fellowship in 2016-17 to Israel. As not just a Jewish artist but also as one who crosses cultural boundaries, she’s received praise in numerous high-profile American publications. Her multicultural art has also been featured in The Jewish Week in New York City and New Jersey, The Jerusalem Post, The Times of Israel, and other publications.