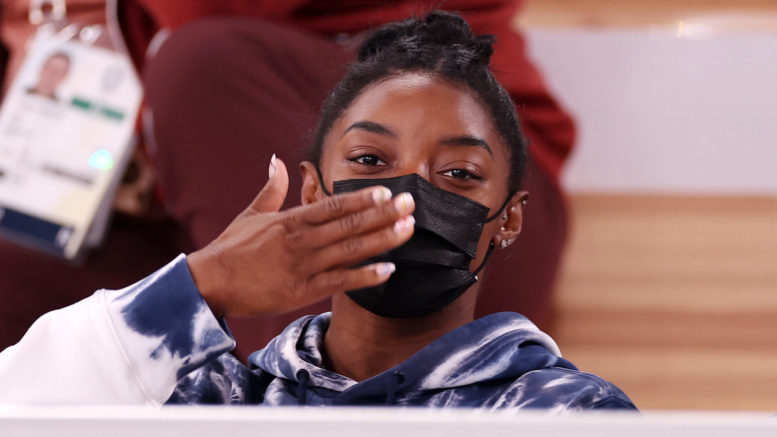 This article first appeared on Kveller.

By Hannah S. Pressman (JTA) – When I woke up on Tuesday, at first it seemed like any other morning. I had to get two kids ready for camp (fill water bottles, slather sunscreen, pack the snacks), and I had to get myself ready to attend Ladino class over Zoom (finish a worksheet, slurp coffee, practice rolling my r’s). Since I live on the West Coast, I’m used to being a little late on breaking news. As I yawned and stuffed Pirate’s Booty into a bag, I noticed a one-word text from my sister: “Simone.”

At first I was confused. Then I remembered that the Olympic women’s gymnastics team final had started four hours earlier — and I suddenly had half a world of things to catch up on in the wake of Simone Biles’ withdrawal from the competition. What followed was a day of real-time drama, U.S. teammate heroics, Hoda Kotb appearing distressed and so many hot takes (so many) about Biles’ decision to scratch (i.e. exit the competition) after performing a vault and losing her air awareness partway through.

Despite all the words already spilled about the situation, I’m here to offer another take informed both by Jewish tradition and by my personal gymnastics fandom.

Like many women (and men), I’ve been a gymnastics fan since forever. This is not related to any personal involvement or skill in the sport; the most I’ve ever been able to do is a crooked cartwheel. However, since the 1992 Olympics, my sister and I have been hooked. That year we recorded the women’s gymnastics team final and literally wore out the VHS tapes replaying them. I can still hum every note of Shannon Miller’s floor routine, and I remember a television profile that showed Miller tapping her feet on the floor while studying at school — a superstar athlete for the aspiring quiz bowl set.

As each Olympic cycle approaches, my sister and I watch all the coverage of the gymnastics trials and analyze everything together. We have become well-versed in the sport’s lingo of tucks, pikes and twists; we have absorbed the back stories of our favorite competitors, like Dominique Dawes, Shawn Johnson, Aly Raisman (who didn’t kvell at her “Hava Nagila” routine?), Laurie Hernandez and Biles, considered by most to be the sport’s greatest champion. As we have aged from tweens to teenagers, from young women to adult moms, my sister and I have continued watching other young women — just like us but with glitter-streaked hair and killer abdominal muscles! — face unbelievable pressure to perform perfectly.

For fans of the sport, it has been amazing to watch the U.S. evolve into a global gymnastics superpower, winning Olympic team medals at every cycle since 1992 and frequently producing gymnasts who could win all-around and event titles at the World Championships. We’ve been watching long enough to know that, historically, it was not always such a given that the American women would win anything, much less piles of gold medals.

So my sister and I, like many young women around the world, were watching in 1996 when Jewish gymnast Kerri Strug performed a second vault, while clearly injured, to ensure that the U.S. would clinch the gold medal at the Atlanta Olympics. We watched as Bela Karolyi carried her in his arms, his mustachioed glee contrasting sharply with her pale, drawn face. Many years later we watched as revelations emerged about the various abuses that gymnasts endured while training at the Karolyis’ Texas ranch; about accusations, coverups and willful negligence by USA Gymnastics; about the physical and emotional toll the abuse scandal has taken on a generation of American gymnasts. We watched as some of our gymnastics heroes bravely took the stand to accuse a vaunted team doctor (whose name, like Haman, should be drowned out in a chorus of boos) of physically abusing them under the guise of treatment, sometimes with their own mothers in the room.

Strug’s effort — hailed 25 years ago as the ultimate athletic sacrifice for her team, replayed as a gooey “inspirational moment” in network montages of past Olympic glory, and landing her on lists of Great Jewish Olympians — plays very differently now. Today, athletes in many disciplines are beginning to speak about coach abuse, sponsor mistreatment, pay inequalities and other injustices in their sports.

We are witnessing the dawn of a movement wherein athletes are setting boundaries to preserve their mental and physical health — creating their own version of pikuach nefesh, the Jewish principles of preserving life above all else. Earlier this summer, Naomi Osaka famously stepped back from the French Open after a dispute with the tennis powers-that-be about appearing for news conferences. Citing her history of depression and social anxiety, she also skipped Wimbledon to continue focusing on her mental health. For an athlete as globally influential as Osaka, the decision sent ripples beyond professional sports, prompting questions about how employers and organizations respond when someone requires support for mental health challenges or expresses a need for self-care.

Biles’ withdrawal yesterday sent similar shockwaves around the world, and was greeted by the same contrasting views that greeted Osaka’s timeout (essentially, “she rocks!” versus “she’s a quitter”). These athletes’ recognition of their need to step back runs counter to the typical narrative of athletic heroism, but Osaka and Biles are comfortable writing a whole new story of self-advocacy. This is not the story of someone in a sparkly leotard who limps her way through a vault to please her overbearing coach, or someone who fights through her anxiety to answer invasive questions from a reporter. Instead, this is about strong women who know exactly what they need to thrive, and who can recognize when a situation is too much for them — or their nefesh, their soul — to handle safely.

Biles acknowledged that her anxiety resulted in the disorientation that gymnasts call “the twisties,” and her refusal to perform when her head wasn’t in it was an admirable measure of self-protection. Any coach knows that being even slightly off, especially on the highly difficult maneuvers Biles is capable of, can result in serious injury. It’s tempting to conjecture about the factors that may have contributed to her reaching that point: being the face of Team USA, the financial apparatus of sponsors, incessant media coverage and the pressure of creating an Olympic viewing experience that rests on (and often exploits) the perfect performance of female bodies.

Add to all that the fact that Biles was consciously competing in order to convey her support for the sexual abuse survivor community — despite being traumatized, misled and mistreated by the people in the USA Gymnastics who were supposed to protect her. When there is so much you are trying to transcend, is it any wonder that flying through the air becomes a nightmare?

My sister and I kept texting throughout the day as more information emerged about the team competition. We cheered for the three remaining U.S. teammates who hit their routines to earn silver, and watched as they congratulated the gold medalists from the Russian Olympic Committee, with all the layers of gymnastics history that both teams represent. (Speaking of history: Shoutout to bronze medalist Great Britain, earning the nation’s first gymnastics team medal since 1928!)

As Tuesday in Seattle came to a close, I found myself thinking more about what it means to celebrate an athlete’s story. Removing herself from the competition may not be what the networks had in mind for Biles’ TV-ready moment of Olympic glory, but the message she sent was more powerful than any vault she might have performed. She communicated to the world the fact that life is precious, our souls are precious and we must do whatever we can to keep ourselves safe. Everything else is commentary.