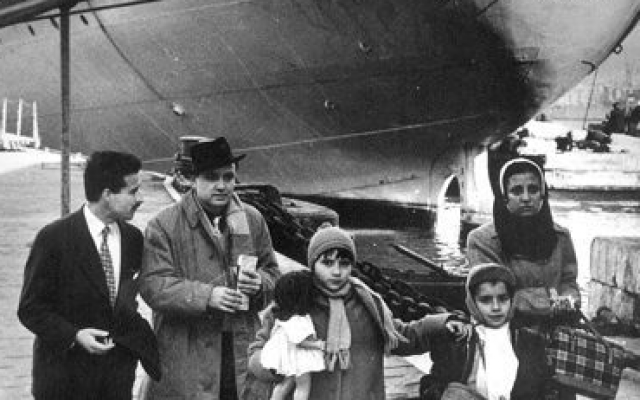 (The Blogs) – On October 29, 1956, Lilian Abda was swimming in the Suez Canal when Egyptian soldiers arrested her. Abda was charged with trying to relay information to the enemy. “I was brought in my bathing suit to the police station,” she recalls. “The next day they expelled me and my entire family from the country.”

Sixty-five years ago this autumn, Lilian Abda was one of 25,000 Jews kicked out by president Nasser following the Suez crisis. Nasser took his revenge on the 60,000 Jews  –a quarter had already fled after 1948 –  because Israel had colluded with Britain and France to invade the Sinai peninsula in an effort to stop terrorist raids into its territory.

Invoking emergency laws, Nasser set about expelling British and French subjects including Jews. They were expelled in two waves: the first were given 24 hours to leave. The second were ordered to leave the country within two to seven days with their families. The authorities then branded all Jews as Zionists, arrested them at random and interned them.

Edna Anzarut-Turner,  who had a British passport, still has nightmares about her expulsion. Each member of the family was allowed one blanket, one suitcase and one Pound.  Her  cousin Myra and fiancé Benny were interned and taken in handcuffs from the “criminal Zionist” prison camp of Moascar, near Aboukir, to be married at the Nebi Daniel Synagogue in Alexandria. The rabbi refused to officiate until their handcuffs were removed. A huge argument ensued with the Arab guards. The handcuffs were taken off only during the wedding ceremony ; and Myra and Benny were driven to a ship leaving Egypt.

British and French nationals were not the only ones to be expelled. Clement Soffer recalls: “I was expelled at 24 hours’ notice at the age of 15, forced to give up my Egyptian nationality, falsely accused of being a spy for Israel, put on a plane with $5 in my pocket. They gave me a document stamped “Dangerous to Public Security” and told me that I could never return. I was not allowed to see my family.”

One  day in December 1956,  a knock on their front door in Heliopolis, Cairo, disturbed  the  Simsolo household. “Two military officers and two policemen asked my father to follow them,”says Gilbert Simsolo . “For three weeks we heard nothing from my father and did not even know where he was detained. My mother finally found him in a military camp near Cairo. We were advised that he would be released only if he travelled abroad. A few weeks later, we joined my father on a ship sailing to Italy, with no leave to return to Egypt.”

Stories of the ‘Second Exodus’ as it is known, will be recalled on November 30, the day designated in Israel to mark the flight, within 30 years,  of almost a million Jews from Arab countries and Iran. My  organization Harif, JW3 and Sephardi Voices UK, will be focusing on the post-Suez expulsion. But we will also be celebrating  the fact that most refugees found refuge in Israel; the rest were welcomed in the West. Almost no Jews regret their departure, however traumatic, from states where tolerance of the Other is not taken for granted.

It is more important than ever to record the experiences of Jewish refugees from Arab countries because history is being re-written to blame the Jews for their own exit or to downplay their suffering. A case in point is the amateur historian Dr Mohamed Aboulghar, whose revisionist history of the Jews of Egypt is apparently selling like hotcakes.

It is not enough to fight for justice, we must fight for truth, too.

ABOUT THE AUTHOR
Lyn Julius is a journalist and co-founder of Harif, an association of Jews from the Middle East and North Africa in the UK. She is the author of ‘Uprooted: How 3,000 years of Jewish Civilization in the Arab world vanished overnight.’ (Vallentine Mitchell)
This article was originally published as a blog in the November 18, 2021 edition of The Times of Israel.