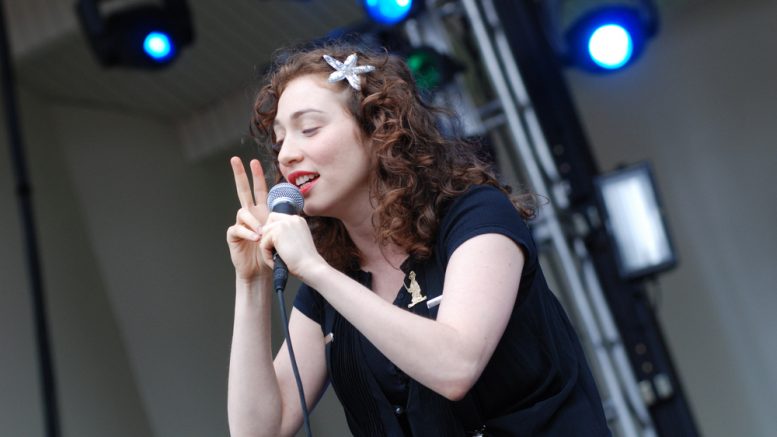 Regina Spektor will be on the main stage of the Edmonton Folk Music Festival on August 11, 2018 / Photo from JTA

(EJNews) – Every summer, the Edmonton Folk Music Festival brings a taste of paradise to our city with a unique combination of Gallagher Park ambience, a wide variety of musical genres and a wonderful camaraderie that adds up to a total festival experience right in the heart of the Edmonton.  This year’s festival, August 9-12, will no doubt carry on with the exceptional tradition.

As the weather warms up, EFMF producers are getting very excited about the 2018 Edmonton Folk Music Festival. To whet your appetites, it has been announced that Moscow born, Bronx raised Regina Spektor will be making her Edmonton Folk Festival debut on Saturday, August 11, 2018. This classically trained, songwriting wonder has been connecting with audiences since the early 2000s with her highly eclectic sound and deeply personal music. A natural storyteller, she possesses an innate ability to narrate the beautiful simplicities and poetic complexities that is life.

The average listener would never guess that Regina Spektor lived through intense anti-Semitism for years, writes Ben Sales in a JTA article from 2016.

He cites an interview with the Guardian published in 2016, when the Russian-Jewish songwriter opened up about the anti-Semitism she faced growing up in Russia, where Jews were not allowed to practice their religion or customs for decades under Soviet rule. She explained that that type of persecution forced Russian Jews to bond together.

Spektor said that she felt harassed for being Jewish even after her family moved to the United States around the time she was nine — during the late 1980s, when Jews were finally allowed to immigrate out of the country. The Spektors settled in New York with the help of HIAS, the Jewish immigration agency, and Regina attended the SAR Academy, a Jewish day school in Riverdale.

“[I]nstead of being the Jewish girl in a Russian school I became a Russian girl in a Jewish school,” Spektor said. “I had dumb teenagers telling me to go back to my effing country. Telling me we were taking their jobs. I got so pissed off I was like, You’d better believe I’m going to take your job, I’m going to take your job and three other jobs, too.”

Spektor rose to fame in the mid-2000s after touring with bands like The Strokes, the Kings of Leon and Keane. However, she’s probably best known now for writing “You’ve Got Time,” the theme song for “Orange is the New Black.” She’s performed at a number of Jewish-themed events, from a concert on the National Mall commemorating the 60th anniversary of the founding of Israel in 2008 to a White House reception celebrating Jewish American Heritage Month in 2010.

Spektor was on tour in Berlin last summer at the same time as the “Unite the Right” rally in Charlottesville, Virginia.  In response to the hate filled rants and marches she tweeted: “My heart is breaking on tour… I am in Berlin where after a dark history, it is illegal to be a Nazi or say hate speech. Please read this little note if you have a minute…

“If you supported Trump but now are realizing that he allowed a tremendous amount of white supremacists into the White House and empowered hate groups- please speak out against him to family, friends and the community at large…

“If you ever wondered what you would be doing during the rise of Fascism, or during Pogroms, or during the 60s civil rights movement, you can see very clearly now whose side you would be on. It is showing itself to you… please let’s wake up to the horrible prejudice and the nightmare that has fallen over the United States of America.

“As a refugee, I have promised to protect and fight for my country when I was sworn in as a citizen. I was a teenager then. As I held up my right hand, I never dreamed of the hate speeches and the normalizing of institutionalized prejudice that would be falling over the land in such a short time. The haters coming out of the shadows, and being empowered.

“I am devastated by this.”

Regina Spektor was the first artist from the 2018 Edmonton Folk Festival list of performers to be announced. Click here for the full performer lineup.

2018 tickets will go on sale Saturday, June 2nd. In-person sales return to the Edmonton Folk Music Festival Office at 10115-97A Ave. due to REMAX Field being unavailable. There will be no ticket lottery held this year. In-person sales start at 9 am (lining up is not permitted before 7:30 am). Online sales start at 10 am through Ticketmaster. Tickets are sold first come, first served.