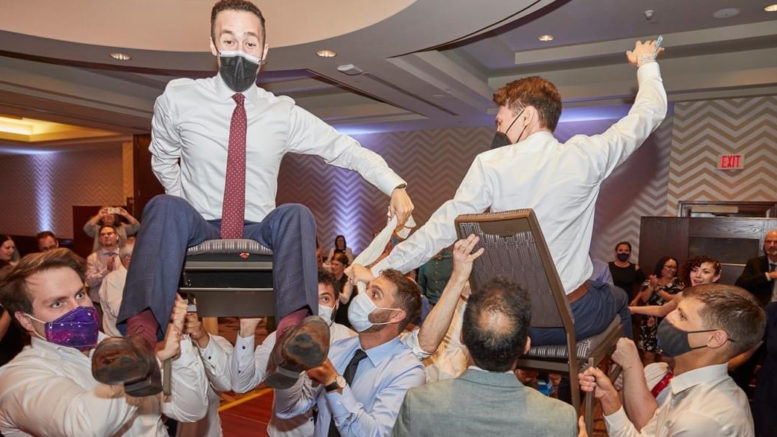 (AJNews) – Temple B’nai Tikvah Rabbi Mark Glickman got a jumpstart on Calgary Pride Week when he officiated his first-ever same-sex marriage, uniting Temple board member David Sklar and his husband John in a July 31 wedding ceremony.

The match was also interracial and interfaith, a topic that Sklar – an actor, playwright and podcast co-host – touched upon in a subsequent installment of his entertaining and informative Bonjour Chai podcast for CJN (Canadian Jewish News).

While the nuptials were, first and foremost, a major milestone for the grooms, it was a remarkable moment for Rabbi Glickman too. 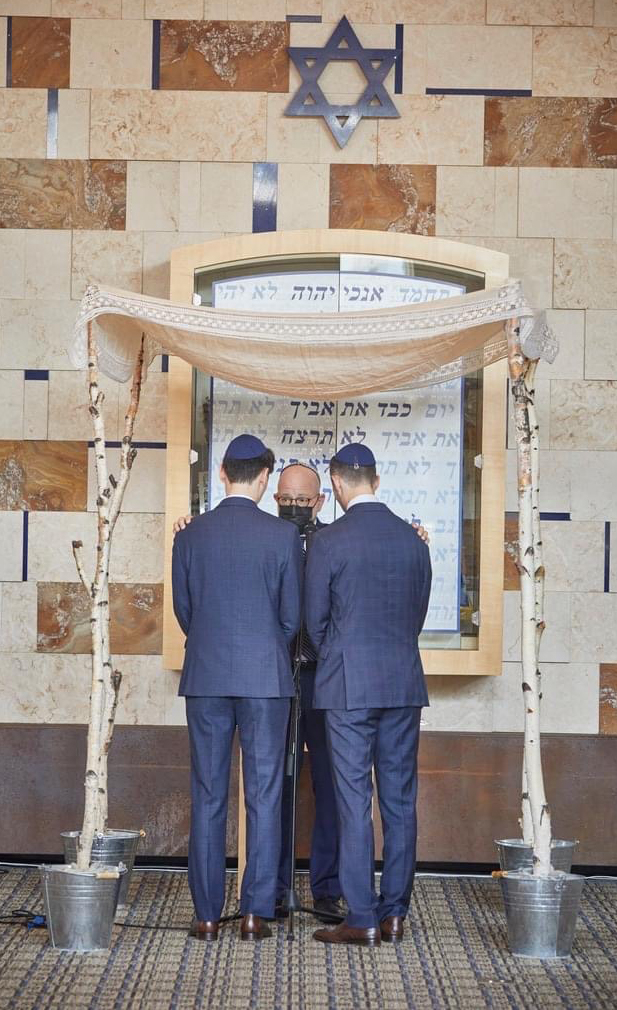 David and John under the Chuppah with Rabbi Mark Glickman at Temple B’nai Tikvah. (Photo supplied)

“We’re very LGBTQ-friendly here at Temple B’nai Tikvah. We host the pride Shabbat and we’ve got a lot of members who are part of the LGBTQ community so one would think I would have been asked a long time earlier. I was kind of getting hurt because nobody was asking,” Rabbi Glickman chuckled.

Notably, Beth Tzedec, Calgary’s Conservative Congregation, supports same-sex marriage but, as yet, Rabbi Cantor Russell Jayne – himself a partner in a gay marriage – has not received a request to officiate one.

When Rabbi Glickman was ordained in 1990, gay marriage was not yet legal. He offered commitment ceremonies to gay couples but was “…reluctant to call it a wedding.”

Having left that reluctance behind him years ago, the Rabbi rejoiced with David and John.

“It was a big deal, of course, but part of the reason it was such a big deal is that it wasn’t a big deal,” the Rabbi said.

The moment reminded him of the words of Judith Kaplan Eisenstein (daughter of Rabbi Mordechai Kaplan, the founder of Reconstructionist Judaism) on the topic of her Bat Mitzvah, which was considered a shanda (disgrace) by many in the Jewish community when it took place 100 years ago this past March, the first in the history of Jewish America.

While Rabbi Glickman says he “tweaked” the liturgy for David and John’s wedding – making the Sheva Brachot “more general and inclusive” – the simcha included all the ceremony one would expect at a Jewish wedding.

Though his journey toward officiating same-sex marriages was an “evolution,” Rabbi Glickman says he has been willing to do them for many years.

“I was always in favour of gay rights and gay inclusion. My original hesitation was just about calling it a ceremony, and that was largely because I had talked to some gay people who said that they saw marriage as a thing for straight people.”

Given the legalization of same-sex marriage, that view has morphed.

“Of course we’re going to sanctify a relationship like [David and John’s], the love and commitment they are proclaiming for each other. Not to do so would have been, I think, profoundly unholy,” Rabbi Glickman said.

His path toward performing interfaith marriages was a more winding journey.

When Rabbi Glickman served as an assistant Rabbi in Dayton, Ohio, Senior Rabbi Irving Bloom did not perform interfaith marriages and told Rabbi Glickman that he would have to follow suit.

Over time, Glickman came to agree with his mentor’s perspective.

“Parts of the Jewish wedding ceremony presume both parties are Jewish. You can either ask the non-Jew to go in drag as a Jew, or you can change the liturgy,” said Rabbi Glickman.

Rabbi Bloom explained the latter course of action would “…intentionally tear out the heart of the liturgy.”

“My refusal to do [interfaith marriages] was not because I judged them negatively…not because I thought it was bad for the Jewish people. It’s simply because it just didn’t make sense for a Rabbi to do that kind of ceremony,” said Rabbi Glickman.

“It would be like me officiating at a ceremony making somebody a citizen of Peru. It’s not that there is anything wrong with becoming a citizen of Peru, it’s just not the kind of ceremony that I do, because I’m a Rabbi.” 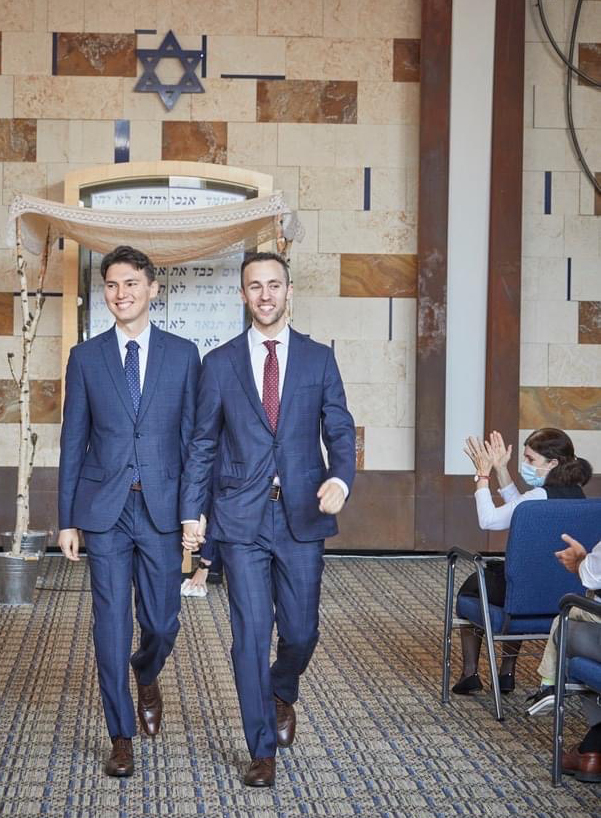 Rabbi Glickman “got flack” for that position, even losing out on potential pulpits. Experiencing significant pushback while serving a congregation in Seattle during the 2010s, he contacted Rabbi Bloom in the hope that he could garner “constructive vocabulary” so as to better navigate the issue.

Rabbi Bloom – by then retired – opened with, “Oh, you still feel that way about that issue?”

Glickman stayed the course as he moved on to an interim position in Boulder Colorado. His turning point came in 2015 when the head of that congregation’s search committee posed a seminal question: “Of all the problems that the Jewish people is facing, is this the one you want to fall on your sword about?”

“It’s a changing world…People are just in a different place, and we have to meet them, otherwise the Jewish world will just leave us behind.”

Rabbi Glickman says he sympathizes with colleagues who choose not to officiate in situations where they feel they lack the authority, and though he now performs interfaith ceremonies, he does not take all comers.

“They have to be willing to have a Jewish home, which I am admittedly vague on defining, and the non-Jewish partner, hopefully together with the Jewish partner, takes my introduction to Judaism class.”

David, who was born and raised in Montreal, had never been west of Toronto when he moved to Calgary close to nine years ago.

He met John online and they began dating in Montreal just as John was completing his law degree at McGill University and planning to return home to Calgary to begin a career in health law.

When John asked David if he would consider giving Calgary a shot, David visited for 10 days, “liked the vibe,” and decided he would settle in Alberta if he could land a job.

He scored a gig at One Yellow Rabbit Theatre Company. A year later, he was cast in the Theatre Calgary production of Bad Jews.

“COVID made our wedding happen,” quips David, adding, “The pandemic brought us closer together because of all the time we spent together.”

The virus proved a double-edged sword when David began experiencing symptoms just 10 days before the wedding. A positive test on the Wednesday before the big day meant guests had to be alerted while the grooms worked feverishly to ensure safety measures.

Fortunately, David tested negative the day before the wedding, and the event went on.

“It was always important to me to have a Jewish wedding,” says David, who grew up attending Jewish day schools and a modern Orthodox synagogue and went to Israel on a birthright Israel trip, later returning on a six month volunteer program. He describes himself as more of a cultural than religious Jew.

“I’m Jewish, I’m gay. What does my pool really look like?  When I met John it felt right, it felt good.”

John, who was raised Catholic but has since become a registered member of the United Church, describes himself as more spiritual than religious.

“I was happy and content to have a Jewish wedding even though I’m not Jewish,” says John.

“He said he could do it if it was a red line,” recalls David, but added that John “… wouldn’t really be giving up his faith and what his spirituality means to him.”

“For me the more important thing was having somewhat of a religious wedding,” John said.

“David’s Judaism is very important to him, and so I was happy to have a Jewish wedding.”

“What helps too is that I have a lot of respect for the Rabbi who married us. I can tell that he is a man of faith, a very intelligent man.”

David and John were wed at Temple, where David serves on the Board of Directors. His volunteer work at the Temple has included the reading of a play by Canadian playwright Arthur Milner, and David says Temple is considering featuring his own play, Vial – which was shortlisted for the Alberta Playwrights’ Network’s Sharon Pollack Award. “The play is about a Jewish professor at a Canadian university who has to struggle between loyalty to her tribe and loyalty to her university,” says David.

Notably, David also serves on the board of JAC (Jewish Adult Calgary), a Calgary Jewish Federation program devoted to engaging and connecting Jewish adults under the age of 40.

“Alberta and Calgary brought me back to my Judaism,” says David. “Growing up in Montreal I didn’t have to do anything and Judaism was around me. Coming out here, it was the first time I had to work actively. I had to be proactive if I wanted any type of Judaism to have any significance to me. I couldn’t rest on my laurels here.”

It helps that he has a supportive spouse. John is no stranger to Judaism, having taken an undergraduate degree in Religious Studies at McGill during which he was a TA for an Introduction to the Hebrew Bible course.

Are there children in David and John’s future?

“That conversation is in the hypothetical realm because it’s not necessarily guaranteed in our situation that we would have kids,” says John.

“Because we’re two guys, there’s a huge undertaking involved in having children. It’s either adoption or surrogacy,” says David, adding that adoption options are limited and surrogacy is costly with no guarantees.

John says he is open to a future child of his receiving a Jewish education and attending Synagogue.

“I’m totally on board with that. I want that to happen,” says David, who adds that he and John – who is half Chinese – would ideally bring their distinct identities and cultures to the fore while “…finding those shared qualities that are important to both of us.”

John says there is benefit to the Jewish community in “reaching beyond its own confines.”

Rabbi Glickman says he is motivated not by numbers but by principle when it comes to interfaith and same-sex marriage.

“Having participated in the ceremony, and seeing the love that was under that chuppah between the two of these guys, and seeing the unbridled joy of that moment, it pains me to think that there are people who, under the banner of religion, say things like that shouldn’t happen.”

A recent Bonjour Chai podcast celebrated David’s marriage to John and explored the question “Will Interfaith Marriage save Judaism—or Destroy it? Tune in at thecjn.ca