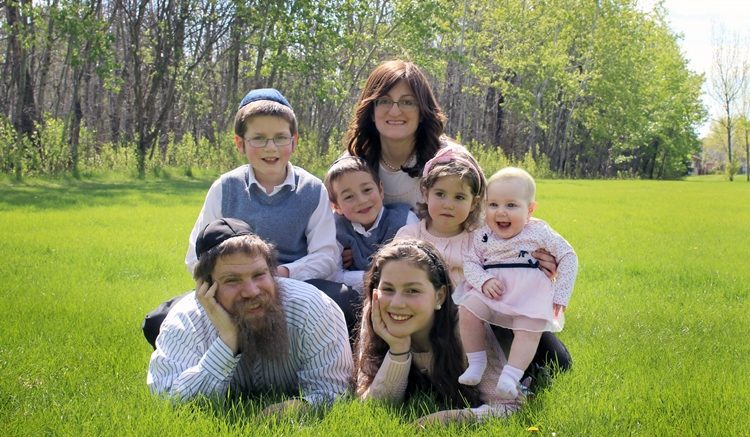 Rabbi Dovid and Rebbetzin Devorah Pinson are celebrating their 15th anniversary of providing Chabad youth programing to the Jewish Community of Edmonton. They are pictured above with their beautiful family. (Photo supplied) 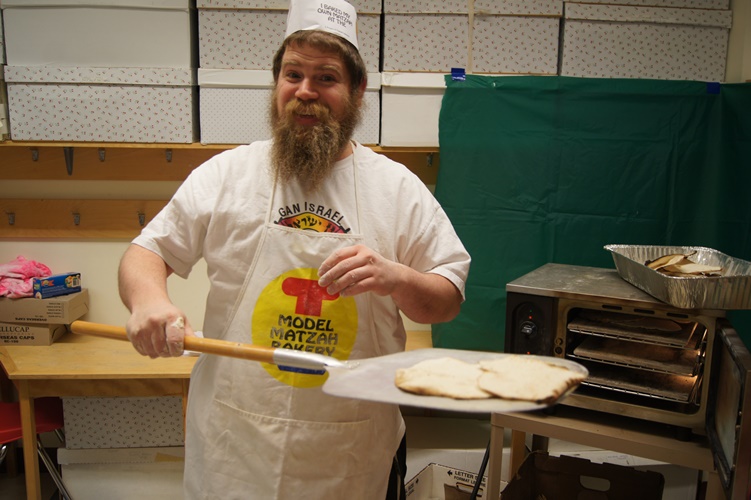 (EJNews) – How does one go about thanking a couple like Rabbi and Rebbetzin Pinson for their immeasurable dedication of time and energy?  And how can one put into words the endless number of ways that the entire Pinson family has helped to shape the Edmonton Jewish community into what it is today?  Since 2003, Youth Directors for Chabad of Edmonton Rabbi Dovid and Rebbetzin Devorah have pioneered new and innovative Jewish youth programming, brought the traditions of holiday gatherings to the greater Edmonton community, and built a sturdy foundation for ongoing spiritual and cultural family education.

“When we first arrived in Edmonton on June 23rd, it was only one week before camp started that year,” recalled Rabbi Dovid during a recent interview.  “There was so much to do, and before we arrived, Rabbi Ari Drelich had been doing absolutely everything himself.”  With such limited time for preparations, the Pinsons set to work drawing up schedules, planning activities, writing out shopping lists, and setting up a computerized system.

“That first year, we had 23 kids at camp,” said Rabbi Dovid.  “And by 2017,” his wife Devorah added, “the staff alone numbered over 23 people!”   “Yes, and we are continuing to grow; now we have almost 150 children!”  Rabbi Dovid concluded.  Both Pinsons are able to remember every camper that they have had – a testament to their dedication.

And grow they have!  Since they first stepped into their roles in 2003, Camp Gan Izzy’s popularity has necessitated its move from the Chabad House to the Westridge Community League, to Laurier Heights School, and now to Talmud Torah School.  “We are so grateful to be able to be in a Jewish space,” Rabbi Dovid remarked.  “We rented the community league and we rented space at Laurier Heights – but it is amazing to do this within the Jewish community instead.”  Indeed, being within a Jewish setting goes a long way in instilling spiritual and cultural connections.  “We want all Jewish kids to have the opportunity to enjoy the camp experience – regardless of means.  For every three dollars we bring in, one dollar goes to scholarships.” 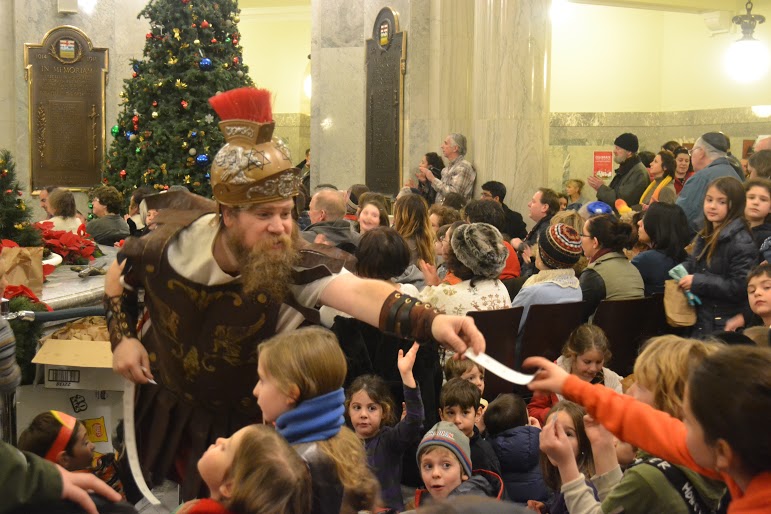 Chabad Rabbi Dovid Pinson brings enthusiasm and energy to the children’s Chanukah program dressed as one of the Maccabees.

With the unwavering support of Rabbi Ari behind the scenes making sure that anything and everything is possible, Chabad youth programming remains the best local option for Jewish families.  And with the help of an incredible team of volunteers and staff, as well as generous donations of resources by Triple Five, and many others, the yearly Gan Izzy activity schedule is always jam-packed with fun.

Camp is but one of the many ever evolving activities brought to fruition by the Pinsons.  “We are really excited about a new program we’re launching called JText.  It’s an amazing concept; Jewish teens subscribe, and every Wednesday they get a text to their phone with a Jewish trivia question.  The seventh one to answer correctly gets a prize,” explained Rabbi Dovid.

“We are fortunate to have a sponsor providing the weekly prize – and this way things are set up so that the kids get excited and there is friendly competition.  But if you think about it, this will have the added impact of bringing meaningful discussions to family dinner tables.  The kids will start off talking about the question of the week, and this will lead to further conversation about Jewish thought.”  JText is active throughout North America and has been a beneficial educational tool within hundreds of communities.  “There is so much potential here for engaging the teens and providing an understanding of key Jewish values for those who may not be as active.”

In terms of teen programing, however, JText is only the tip of the iceberg. Jewish young people in Edmonton are offered exceptional opportunities for cultural exploration and traditional learning, all under the umbrella of fun times shared with good friends.  This year eleven excited Edmonton teens traveled to New York for the CTeens Tenth Annual International Shabbaton.  “It was such an incredible experience for them to see so many other Jewish youth.  There were representatives from over thirty-six different countries!”  According to the CTeens Shabbaton website: “Thousands of teens have forged new friendships while experiencing a meaningful Shabbat.”  And according to all accounts, the experience was not only meaningful, but inspiring. 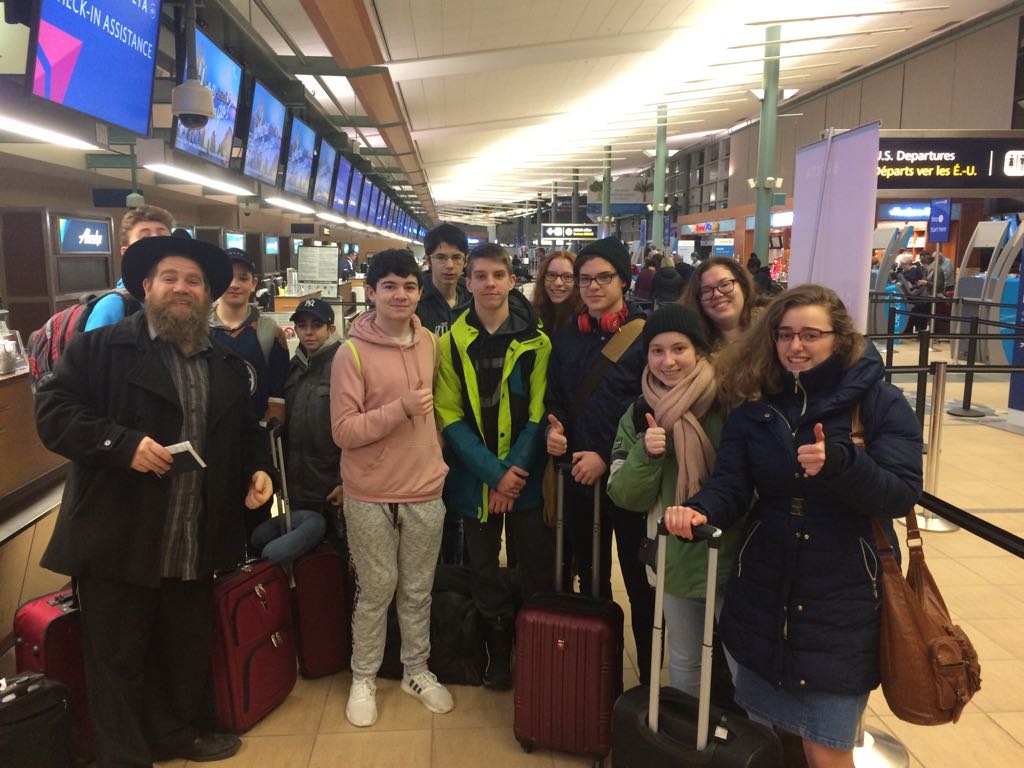 “We had 2500 Jewish kids, and their chaperones on top of that, in Time Square listening to a Jewish singer while celebrating being Jewish together.  It was so neat, all of the different CTeens chapters had their group picture broadcast on those huge TV screens,” said Devorah, as she pulled out her smartphone to display a once in a lifetime shot of smiling Edmonton teens beaming broadly from the massive Time Square jumbotrons.

Irit Shaposhnikov, whose youngest daughter Danielle attended the 2018 CTeens International Shabbaton commented: “I truly believe that the Pinsons played big a role in raising our girls.  When we immigrated from Israel we were secular, and now none of us can imagine our lives without this spiritual connection we’ve gained.”  She chuckled, “I think that in the last six years that we’ve been in Edmonton, our girls have attended, or been involved in, every youth activity that the Pinsons have organized.”  In fact, after several years as Camp Gan Izzy counselors, the Shaposnikov girls are still extremely close to the friends that they made through being involved at Chabad.  “Building a community shows wisdom, and everything that the Pinsons have done to build the Edmonton Jewish community is like a big hug that embraces everything.”

The Shaposhnikov girls have also taught at the Chabad Sunday Hebrew school, which provides pre-Bar and Bat Mitzvah children with hands-on interactive learning experiences.  “The children receive very focused attention from our team of Hebrew tutors,” explained Devorah.  “We have this fun curriculum that is modeled after the karate belt system.  It helps the kids be self-motivated, but also, we want them to feel that they are only ever in competition with themselves.  This way, as they improve and move up to new levels in their Hebrew studies, they can really feel a deep sense of personal achievement – because that is a feeling that will last.” 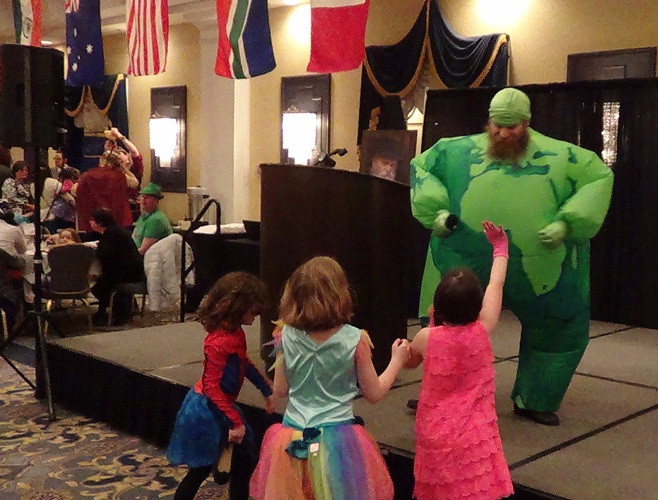 Rabbi Dovid entertains the crowd at a Purim celebration.

Very often, in contemporary society, programs are described as “hands-on,” but the Chabad approach epitomizes this term, and then some.  Devorah illustrated the activities and ongoing projects with a slideshow of this year’s highlights.   The sequence of photos boasted a rich montage of Jewish traditions – all of which had been packed into one fun year.  “We strive for that beautiful balance of fun and learning,” said Rabbi Dovid.  “Because what we want, is to help kids develop pride in their Jewish identities.  We begin at an early age so that they grow up being proud of who they are and where they’ve come from.”

To cultivate this pride, Rabbi Dovid and Rebbetzin Devorah take a very individualized pedagogical approach to Bar and Bat Mitzvah classes.  “We teach them one-on-one, but sometimes it ends up being the whole family that comes along because they’re all interested too,” mused Rabbi Dovid.  “But the point is to make the Jewish content personally relevant to each student.  If a boy is interested in history – then I design the program of study around this.  You need to focus on the individual’s interests, otherwise they aren’t going to be engaged.”  And as any teacher can attest – an engaged student is a motivated student, and a motivated student is also a productive one.

“Parents bringing their child to prepare, doesn’t necessarily mean the child is going to be interested – I have to find ways to engage them,” noted Rabbi Dovid.  “I once had a boy who was coming to Bar Mitzvah classes only because his parents told him he had to.  We started out having our classes together on the playground.  Eventually, after a lot of climbing around the play structure and getting to know him, I found things that he enjoyed.  Sometimes I’ll sit down and play chess with a kid, I ask questions, the conversation starts up, and then the learning takes over.”  By tailoring their teaching approaches to the needs of each child, the Pinsons are succeeding in inspiring a new generation of proud young Jewish adults.

With many unaffiliated Jewish families in Edmonton, it is a challenge to find meaningful Jewish experiences for many local teens.  To this end, Rabbi Dovid runs the monthly Lunch and Learn Program; traveling to public schools with large Jewish demographics.  When asked about the discussion topics, Rabbi Dovid answered: “You might be surprised; some of the topics are very current.  I go by what will be relevant for the kids, and sometimes these topics can be a bit more controversial.  For example: during the US elections we talked about democracy and what the kids thought about its ethical and moral implications.  But then there are times when I go in with one topic and they want to talk about something completely different – so we go with the flow,” he commented with a smile.

The Edmonton Jewish community has been truly blessed.  Local children, from tots to teens, are being engaged spiritually, intellectually, culturally and socially.  It seems that the Pinson duo, with the help of their wonderful children, are always reaching for new heights.  If they believe that the sky is the limit, then there are truly no limitations on what will be achieved.