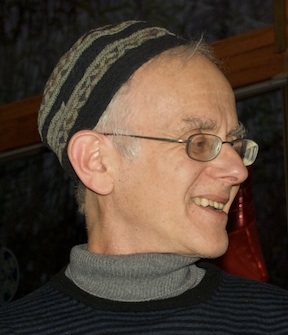 (EJNews ) – Prof. Francis Landy has retired and is teaching the last of his post-retirement classes this Fall term. Prof. Landy has agreed to hold a final formal lecture (in the German tradition) marking the end of his 31 years of teaching at the University of Alberta. This lecture will also mark the end of historical-critical and literary scholarship on Hebrew Scripture (“Old Testament”) at the University of Alberta, a tradition that has been part of the UofA in one way or another since its inception. A generous alumnus has come forward to help bridge the cost of teaching about Hebrew Scripture over the short term, but we must still find a longer-term solution to this challenge!

Please mark your calendar for Francis’ Valedictory Lecture (Abschiedsvorlesung) Wednesday, December 2nd, at 6 -8 p.m. in Business 1-9 at the University of Alberta main campus. the theme of his lecture is  “Moses’ Abschiedsvorlesung: Deuteronomy and the Politics of Farewell.”

In a recent article entitled “Paradoxes, Enigmas, and Professorship: An Interview with Francis Landy on the Occasion of his Retirement from the University of Alberta” that appeared in University of Alberta Religious Studies Spring Newsletter (2014),  Ian D. Wilson writes: “This year marked Francis Landy’s thirtieth as a professor at the University of Alberta, and officially his last. He is now emeritus, but to say simply that he has “fulfilled his duty” to the institution seems like a serious understatement. He is the author of countless scholarly articles and four books [The Tale of Aqhat  (1981); Paradoxes of Paradise: Identity and Difference in the Song of Songs (1983; rev. ed.2011); Hosea (1995; rev. ed. 2011); Beauty and the Enigma and Other Essays on the Hebrew Bible (2001)].
“He was, for a number of years, Editor-in-Chief of Studies in Religion/Sciences Religieuses, Canada’s foremost journal for the study of religion, which attracts submissions from all over the world. He was President of the Canadian Society of Biblical Studies in 2009-10 [his presidential address was published as “I and Eye in Isaiah, or Gazing at the Invisible,” Journal of Biblical Literature 131 (2012):85-97].
“He was a driving force behind the creation of the U of A’s graduate program in Religious Studies. And he has been active in Edmonton’s Jewish community, regularly gathering with local rabbis to read and discuss scripture. In the few short years I’ve known and worked with him (we first met at an SBL meeting in 2008, and I served as his teaching assistant from 2010-12), his erudite instruction and warm friendship have left an indelible impression on me and my scholarship. Without a doubt, many other students and scholars of religion who have spent time at the U of A would say the same.”
“Recently, Francis and I conversed, over email, about his career,” continued Wilson. “Francis, educated at Cambridge (BA) and Sussex (PhD), came to the U of A in 1984, shortly after earning his doctorate. At the time, he was studying at the Hartman Institute in Jerusalem, reading Talmud and Midrash, and Religious Studies (then a department) hired him to fill a position in Jewish Studies. So I asked him if, back then, he was more interested in the Bible in particular or in the study of Judaism in general. He said that he is, and always has been, primarily a biblicist.”   Click here to read the complete interview.
Don’t miss this wonderful opportunity to hear Professor Landy’s final formal lecture on December 2, 2015 at 6 pm.
Andrew Gow, Ph.D. is a Professor of History and Director of Interdisciplinary Program in Religious Studies at the University of Alberta. He can be contacted with ideas and suggestions at agow@ualberta.ca

Be the first to comment on "Prof. Francis Landy to give farewell lecture to mark his retirement from University of Alberta: Dec. 2"