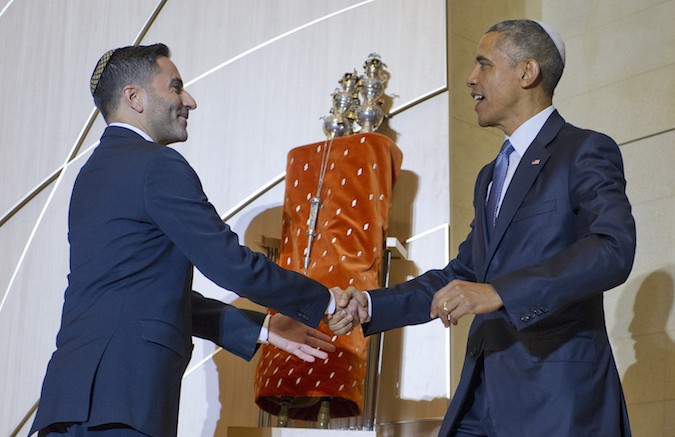 WASHINGTON (JTA) – President Barack Obama has a message for American Jews: I don’t shy away from disagreeing with Israel publicly, because I care about Israel and our shared values.

When it came to Israel, Obama was, as usual, unstinting in his pledge to protect the interests of the Jewish state. He noted that he and Netanyahu still disagree over how best to keep Iran from acquiring nuclear weapons. He said, “I will not accept a bad deal” in nuclear talks now underway between Iran and the major powers.

It was when Obama addressed Israel’s treatment of the Palestinians that his tone became less effusive and more chastising – a necessity, he said, that arose out of the very values he admires about Israel. Obama spoke about how as a young man he came to know Israel through the images of kibbutzim, the heroes of the 1967 Six-Day War and the ideas of the blooming of the desert and remaking the world.

“And to a young man like me, grappling with his own identity, recognizing the scars of race here in this nation, inspired by the civil rights struggle, the idea that you could be grounded in your history, as Israel was, but not be trapped by it, to be able to repair the world — that idea was liberating. The example of Israel and its values was inspiring,” Obama said.

“So when I hear some people say that disagreements over policy belie a general lack of support of Israel, I must object, and I object forcefully. For us to paper over difficult questions, particularly about the Israeli-Palestinian conflict or about settlement policy, that’s not a true measure of friendship.”

He noted, “It is precisely because I care so deeply about the State of Israel — it’s precisely because, yes, I have high expectations for Israel the same way I have high expectations for the United States of America —- that I feel a responsibility to speak out honestly about what I think will lead to long-term security and to the preservation of a true democracy in the Jewish homeland.”

Most of the audience at the Conservative congregation appeared to applaud and cheer, but a significant minority remained silent.

Obama returned multiple times to the golden age of black-Jewish cooperation, the civil rights movement of the 1950s and ’60s, finishing the speech with an anecdote of jailed freedom riders singing “Adon Olam” to the melody of “We Shall Overcome” and blacks joining Jews in wearing what they dubbed “freedom caps,” or yarmulkes. Obama wore a white yarmulke as he delivered his speech from the bimah, and members of the audience appeared visibly moved.

“From Einstein to Brandeis, from Jonas Salk to Betty Friedan, American Jews have made contributions to this country that have shaped it in every aspect,” Obama said, referring respectively to physicist Albert Einstein, Supreme Court Justice Louis Brandeis, the creator of the polio vaccine and the pioneering feminist.

“And as a community, American Jews have helped make our union more perfect,” he said. “From the founding members of the NAACP to a Freedom Summer in Mississippi, from women’s rights to gay rights to workers’ rights, Jews took the heart of biblical edict that we must not oppress a stranger, having been strangers once ourselves.”

In an interview last week with journalist (and Adas congregant) Jeffrey Goldberg of The Atlantic, Obama said that Netanyahu’s rhetoric before Israel’s election in March and the composition of his new right-wing government were concerning.

“When, going into an election, Prime Minister Netanyahu said a Palestinian state would not happen under his watch, or there [was] discussion in which it appeared that Arab-Israeli citizens were somehow portrayed as an invading force that might vote, and that this should be guarded against — this is contrary to the very language of the Israeli Declaration of Independence, which explicitly states that all people regardless of race or religion are full participants in the democracy,” Obama said, according to Goldberg’s transcript. “When something like that happens, that has foreign-policy consequences, and precisely because we’re so close to Israel, for us to simply stand there and say nothing would have meant that this office, the Oval Office, lost credibility when it came to speaking out on these issues.”

In that interview, Obama noted, as he has before, his continued popularity with American Jews, and this was in evidence during the speech. He drew repeated rounds of applause, especially when he spoke of the need to criticize Israel constructively. Obama remains profoundly unpopular in Israel.

Samantha Kreindler, a photographer from Philadelphia who drove in for the speech, said she sought greater debate on Israel within the Jewish community.

“I have so many friends who blindly believe, and I understand that,” she said. “But no one is right all of the time.”

Notably, the White House invited Israeli Ambassador Ron Dermer to the speech — an effort, perhaps, to move past hard feelings after Dermer helped orchestrate Netanyahu’s speech in March to Congress focusing on the flaws of Obama’s approach to Iran. But Dermer did not attend. An Israeli official told JTA that Dermer was “out of Washington on a previously scheduled trip.”

Be the first to comment on "President Barack Obama: I have same high expectations of Israel as I do of U.S."