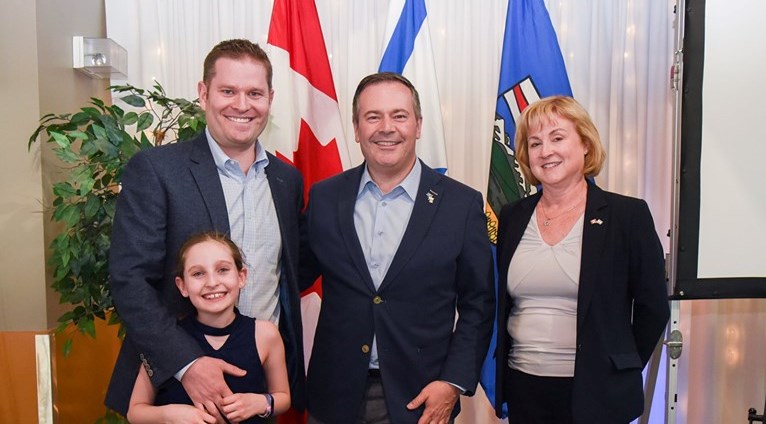 (EJNews) – Alberta’s newly elected Premier, Jason Kenney, attended the Yom Ha’atzmaut party at Snow Valley in Edmonton on May 9 celebrating the 71st anniversary of the State of the Israel.  His comments are exerpted below:

“In his statement this week marking 71 years of national independence, Israeli Prime Minister Benjamin Netanyahu said, and I quote: “We are the only people to live in the same land, speak the same language, and practice the same faith as we did 3,000 years ago.”

“The modern state of Israel is indeed a remarkable human achievement in countless ways – including as an island of democratic freedom in the Middle East, and as a global hub of enterprise, industry, and creativity – but most of all as a tribute to the strength of the Jewish faith and the resilience of the Jewish people.

“It is tragic to see, as we have in recent days, that after all these decades of effort to achieve peace and security, hate-filled anti-Semitic fanatics are still raining rockets down on Israel and still trying to overthrow its right to exist.

“All people of faith should draw strength and inspiration from the examples of Judaism and Israel.

“We live in an age of growing religious persecution visited on people of many faiths in many nations. It saddens me that even Canada and Alberta are not immune. But the faithful are united by their belief in a G-d who protects us all. And if we stand together against hate and evil, they will not prevail against any of us.

“That’s why I’m here today, to express my solidarity as the new premier of Alberta with the Jewish people of our capital city, of our province, of Canada, and of Israel.

“To that end, our government will adopt the International Holocaust Remembrance Alliance definition of anti-Semitism, and will implement a Security Infrastructure Program to help protect Jewish community facilities (amongst others) from hate inspired violence.

“But I’m also here to draw on your strength and inspiration for the work that lies ahead.

“What the Jewish people have endured, overcome, and accomplished, as evidenced by thriving communities like yours in Edmonton and of course in the great state of Israel, serves as model for all humanity. In comparison, frankly, my job should be a piece of cake.

“Thank you very much for inviting and inspiring me. I am proud to be able to say, on behalf of the Government of Alberta, that I will work to strengthen the Alberta-Israel relationship and that I wish all Israelis a happy Independence Day.