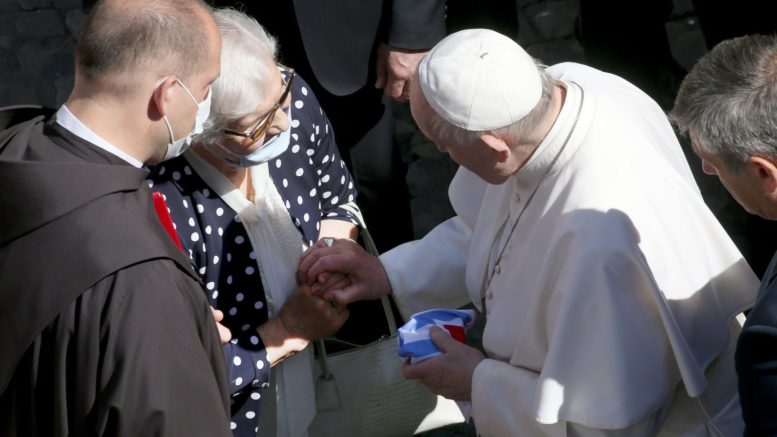 Pope Francis greets Lidia Maksymowicz, a survivor of the Auschwitz death camp, as he leaves his weekly general audience in Vatican City, May 26, 2021. He bent down and kissed the number she had tattooed on her arm during the Holocaust. (Franco Origlia/Getty Images)

(JTA) — Pope Francis kissed the number tattooed on a Holocaust survivor’s arm during his weekly meeting with members of the public on Thursday.

Lidia Maksymowicz, 81, showed the pope her number, and Francis got down on a knee to kiss it. The two did not exchange words, she told Vatican News.

“We understood each other with a glance,” Maksymowicz said, adding the pontiff’s gesture “has strengthened me and reconciled me with the world.”

Maksymowicz, a Polish citizen now living in Krakow, was deported to Auschwitz from her native Belarus before she turned 3. At the camp she was subjected to the work of the infamous Nazi doctor Josef Mengele, who experimented on Jewish prisoners.

In recent years, Maksymowicz has participated in events sponsored by the Catholic charity Sant’Egidio aimed at educating youth about the Holocaust.

Francis has frequently issued firm denunciations of antisemitism and often met with Jewish groups and delegations. He visited Auschwitz in 2016, where he engaged in silent prayer. In 2018, he said “The memory of the Shoah and its atrocious violence must never be forgotten.”