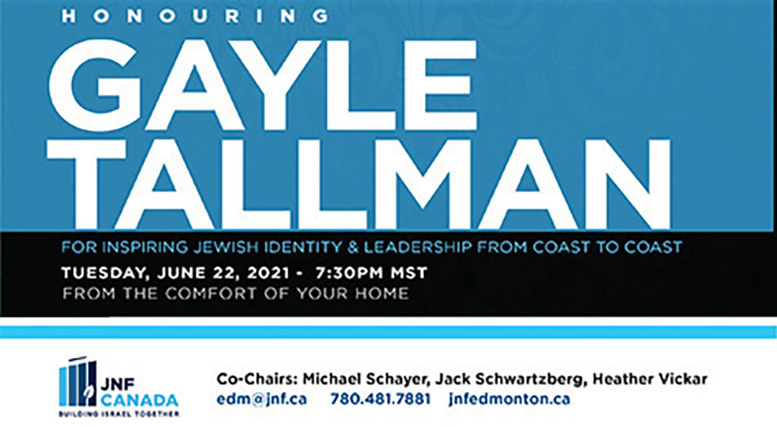 (AJNews) – Community members from Alberta and Coast to Coast are sending in donations as a tribute to Edmonton Negev Gala honouree Gayle Tallman.

They are also submitting heartfelt testimonials about the incredible impact that Gayle had on their lives from when they were in a BBYO program, at Camp BB, in the Edmonton JCC or on a March of the Living trip.

The material is being compiled to help paint a picture of the amazing legacy that Gayle has left on a generation of Jewish community leaders. It will form part of the virtual tribute that will be celebrated on June 22 in Gayle’s honour.

Visit jnfedmonton.ca to register for the Negev Gala and donate to the Gayle Tallman Ninja Fitness Park.

Meanwhile, heartwarming testimonials are being submitted. 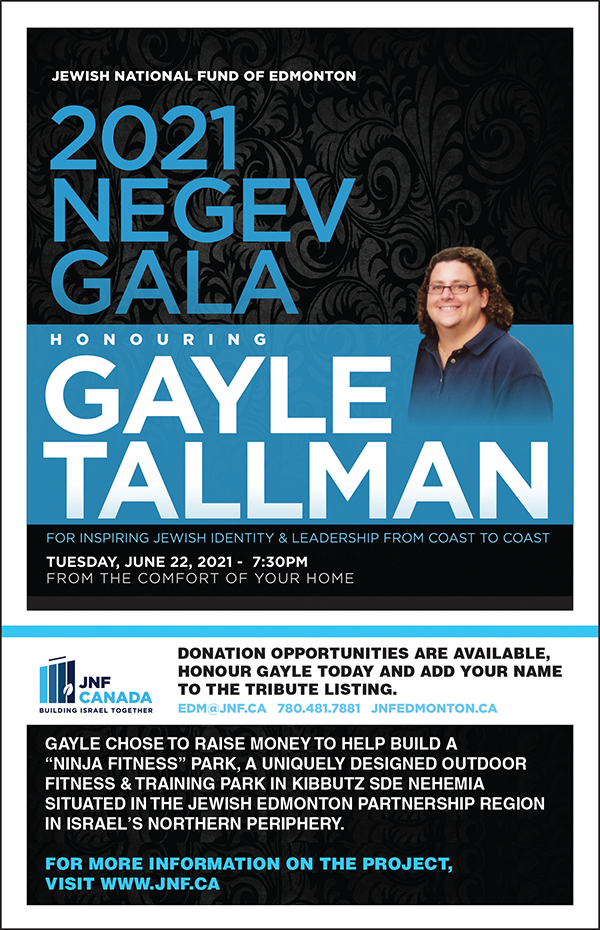 Lorne Klemensberg wrote, “There are not many special people that one meets in life who have a true heart of gold. A person who truly cares to their core and has immense compassion and devotion to education, leadership, and community. There are even fewer people in the world that have all of these amazing attributes (and many more) wrapped up in a crazy, no holds barred body! Shalom Gayle Tallman…JNF Negev Gala 2021 Honouree!

Lorne explained that his relationship with Gayle started when he was a surly teen in Edmonton and evolved into a professional relationship after his army and college training when with Gayle’s (very) strong recommendation he became the Israeli tour guide for the MOL Canadian trips.

“This was the start of our professional relationship, and we ended up working together for many years. Her single act of kindness and solidarity set me on my professional path and lifelong connection to the Canadian Jewish Community in Israel,” wrote Lorne.

“Gayle taught us a great many important life lessons. Through her actions, words, commitment, and tireless work for her community, she has shown us what it means to be a true caring leader (she also taught us how to swear like sailors).

“Thank you Gayle! You most certainly deserve this honour, and many more.”

Gillian Horwitz wrote that Gayle’s “quiet unassuming personality is in effect one of her greatest strengths; she has the ability to inspire young and old, see their potential and involve them in programs and projects that reflected their specific interests. Her years as a community leader produced innovative programming with a specific focus on Holocaust education.

“This important program thrived under her guidance; she formed and created a program that became the envy of all those who worked in this vital area. Gayle involved practically every high school in the greater Edmonton area. She inspired students and teachers alike. The Edmonton Holocaust Symposium attracted thousands of students whose first introduction to The Holocaust, was when they attended this annual event.

“She counselled and supported ‘March of the Living’ students as well as adults at all hours of the day and night when issues arose that required a sensitive and caring response…Gayle stepped up to the plate at every turn when the need arose.

“Nothing was ever too much for Gayle; no 9-5 for her! Her commitment to our community & its membership went beyond the call of duty. Under her leadership and guidance, Edmonton’s Jewish community thrived.

Jack Schwarzman wrote, “As Executive Director of the Edmonton Jewish Community Center Gayle was a true leader and mentor to young and old no matter their background.

“Holocaust education was always Gayle’s passion. Her goal was to guide young people through the horrors of the Holocaust, to ensure that future generations would bear witness, and honour the memory of the six million Jews that perished.

“In her understated and unassuming manner she worked tirelessly on behalf of the Jewish Community. She touched many lives and made a huge impact. That is why I am delighted that Gayle Tallman has been chosen as the 2021 JNF Negev Honouree. A most well-deserved recognition.”

Chloe Soibelman wrote:  “One year, in the 2000’s, I worked part time at the JCC as City Supervisor for BBYO.  Gayle Tallman was the Executive Director of the JCC/JFed at the time. She was not only the “boss” at the JCC, she was also a magnet. She was wise and full of great stories. She made epic fun of most of us. She could be very tough, but everyone knew, that if you did right by Gayle, she would always have your back.

“I learned some very valuable lessons in my time working at the JCC. So many teens and young adults are better people and better community members and probably better parents because of her, myself included. I’m so thrilled to support the Negev Gala this year in honour of Gayle Tallman.”

Sharon Marcus wrote: “Inspiring the leaders of the day, along with those of the future, is a noble task for any community professional. Without a doubt Gayle Tallman exemplified both and her contribution to the Edmonton Jewish community will be felt for decades to come. Through decades of being a Jewish community professional myself it was a privilege to work beside someone who exemplified all that is best in a leader, as witnessed through her commitment to Jewish life and inviting others to take the journey with her.

“Gayle’s work with teens is rather legendary and something our community continues to benefit from as these same individuals are now adults in leadership positions throughout our community. But that work was just a piece of what she brought to her position. Gayle’s vision for Jewish Edmonton was driven by her dedication to reach out and serve all its members. From her hands on approach with Holocaust survivors and instituting a yearly public school forum on the Holocaust education for high school students to partnering with communities in the Galilee and creating a school exchange through P2G. Through her leadership, Gayle also cultivated dedicated volunteers to lead the annual UJA campaign, ensuring that the needs of Jewish Edmonton continued to be met.

“Inspiring Jewish identity and leadership best sums up Gayle’s legacy, one that will last for generations. Each successive generation relies on the next to secure its future, as such, Edmonton will continue to gain much from Gayle’s leadership. For that we can all be grateful.

“I hope you will join me in making a donation to the Gayle Tallman “Ninja Fitness” Park (https://jnf.ca/edmonton/edmonton-negev-gala-2021/ ), a uniquely designed outdoor fitness and training park at Kibbutz Sde Nehemia, to honour Gayle’s contribution to our community.”

Be the first to comment on "A true caring leader: JNF Edmonton honours Gayle Tallman on June 22"