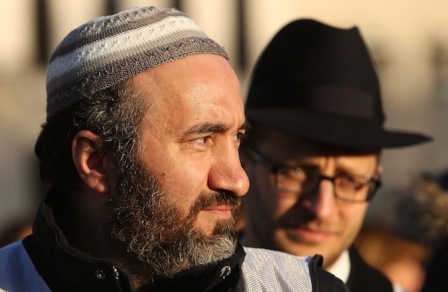 NEW YORK (JTA) – In 20 years, there will be more Muslims in North America than Jews, according to a new Pew Research Center report.

The report, which was released April 2, also found that more American Jews are leaving Judaism than non-Jews are joining the Jewish people.

According to “The Future of World Religions: Population Growth Projections, 2010-2050,” Muslims will overtake Christians in the last quarter of the 21st century as the globe’s largest religious group. In the United States, Muslims will comprise 2.1 percent of the population in 2050, up from 0.9 percent in 2010. Jews, meanwhile, will fall to 1.4 percent of the U.S. population from 1.8 percent in 2010.

The Pew study also offered a detailed look at the sizes of national Jewish communities around the world, how fast the communities are expected to shrink or grow, and Jewish fertility rates.

There were nearly 14 million Jews around the globe in 2010, with expected growth to 16 million by 2050, according to the study – a lower growth rate than the general world population. Overall, Jews comprise roughly 0.2 percent of the world’s population, with about 44 percent of Jews in North America; 41 percent in Israel, the Middle East and North Africa; 10 percent in Europe; and 3 percent in Latin America and the Caribbean.

By 2050, 51 percent of Jews are expected to live in the Middle East — almost all in Israel — and 37 percent in North America. The number of Jews in Europe is expected to decline more precipitously and outpace general European population shrinkage, according to the report.

Meanwhile, the study showed that globally there were 1.6 billion Muslims in 2010 and a predicted growth to nearly 2.8 billion in 2050 — from 23 percent of the population to 30 percent. In 2050, nearly three of every 10 people will be Muslims.

Today, the United States and Israel have about the same number of Jews, though there is some debate among Jewish demographers over which country is ahead. The Pew study counted 5.7 million Jews in the U.S. and 5.6 million in Israel, but other studies have shown more than 6 million Jews in each country, and Israel’s Central Bureau of Statistics said Israel had 6.2 million Jews in 2014. In any case, Israel is expected to pull unambiguously ahead in the coming years.

The study counted as Jews those who self-identify as Jewish when asked their religion. It does not include so-called Jews of no religion — those who have Jewish ancestry or consider themselves partially Jewish but say they are not Jewish by religion.

Nearly 95 percent of all Jews live in just 10 countries, according to the study. Except for Israel, none of those countries is more than 2 percent Jewish. The 10 countries with the most Jews are, in descending order, according to Pew, the United States, Israel, Canada, France, Britain, Germany, Russia, Argentina, Australia and Brazil.

While the study showed that the spread of secularism is expected to continue and the number of atheists projected to rise, religious people are expected to grow as a proportion of the global population because they tend to have more children.

Be the first to comment on "Pew study: Muslims to overtake American Jews by 2050"