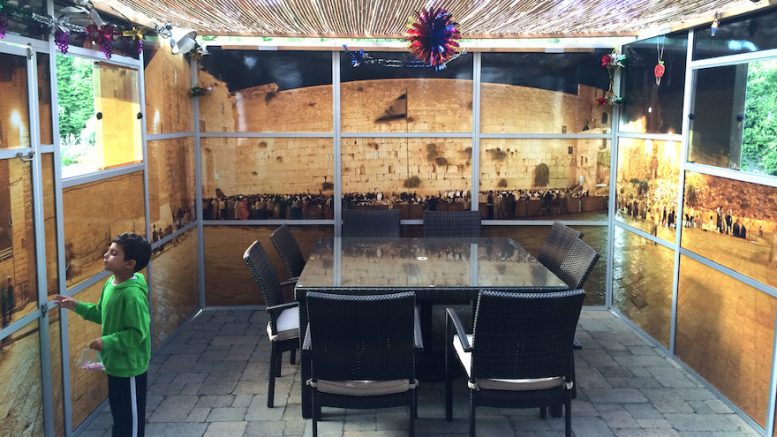 The interior view of a Panoramic Sukkah. (Courtesy of Eliyahu Alpern)

JERUSALEM (JTA) — When it comes to Sukkot, the weeklong festival in which Jews live and eat in temporary huts known as sukkahs, no place does it better than Jerusalem. City schools and plenty of workplaces close, and a festive spirit permeates the air.

Many Jews around the world make a tradition of visiting Jerusalem to celebrate the holiday, which is also known as the Feast of Booths. Can’t make it to the Holy City? Fear not. Your sukkah can now transport you and your loved ones here.

Well, sort of. The Panoramic Sukkah is a creation by Andy “Eliyahu” Alpern, a photographer specializing in 360-degree images. Thanks to his sukkahs, which consist of panoramic photos of famous places in Israel, celebrants can easily pretend that they are actually at notable Jerusalem sites such as the Western Wall at night or smack in the middle of Mahane Yehuda market.

Alpern, 50, is a native Chicagoan who now lives in the northern city of Safed, where he runs his own gallery. Five years ago he was wandering through Safed during the festival, listening to the voices of families who were celebrating in their sukkahs, when the idea for the Panoramic Sukkah hit him.

By providing an immersive, inside-Israel experience, the Panoramic Sukkah is “a way of sharing Eretz Yisrael with people all over the world who can’t be here,” he told JTA, using the Hebrew term for the Land of Israel.

Alpern added that the point of Sukkot is to hearken back to life during biblical times — for example, wandering in the desert after the Exodus from Egypt (hence the origin of the sukkah), thus one of his panoramic images is of the Negev Desert. Also, as Sukkot is one of the three pilgrimage festivals  (the others being Passover and Shavuot), it was tradition for Jews to travel to the Temple in Jerusalem.

Launching Panoramic Sukkah as a business two years ago, Alpern had to find the material to print the walls on and a printer to transfer the images, taking into consideration both quality and affordability for the consumer.

Alpern declined to say how many sukkahs he has sold to date, but said his goal is to sell 100 by the time next year’s festival begins. (And while it’s too late to purchase a Panoramic Sukkah for this year, it’s not too early to plan for next: Keep an eye out for a sale during the intermediary days of the holiday, when Jews have Sukkot on the brain.)

A variety of images and styles are available. The full Panoramic Sukkah kit (from $1,080) includes a frame, as well as four walls with a 360-degree image on semi-translucent fabric. Other options include walls only (from $800) or single-wall panels (from $210) if, as the website says, you’re “looking to bring Israel into your Sukkah, but not for quite so much Israel.”

Of course, Alpern can also create custom sukkahs. This year he created a wall panel for a customer depicting the Ushpizin, mystical special guests that are ritually welcomed each evening of the holiday. The panel included the images of the traditional “guests” — Abraham, Isaac, Jacob, Moses, Aaron, Joseph and King David — and interspersed them with images of the customer’s family members and inspirational figures such as Gandhi and the Rev. Martin Luther King Jr.

If Alpern’s Panoramic Sukkahs can bring Jerusalem to anywhere in the world, then it’s probably no surprise that the reverse can also be true. Perhaps the greatest custom sukkah that Alpern has created was for himself: Wrigley Field. A diehard Chicago Cubs fan since he worked as a vendor at the iconic ballpark in 1984, Alpern was disappointed that he could not make it back to his hometown last year for the World Series. So he took a panoramic photo of Wrigley that he had shot a few years back and turned it into a Panoramic Sukkah of his own.

Last year, Alpern and his three sons slept in the sukkah, waking up in the middle of the night to watch the games broadcast over the internet. This year — with the Cubs on a hot streak and ready to defend their title — they plan to do the same: Major League Baseball’s postseason begin Oct. 3, the night before Sukkot begins.